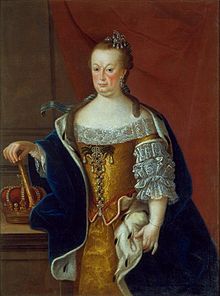 Maria Anna was born as the daughter of King Philip V of Spain and his wife Elisabetta Farnese , Princess of Parma (Isabel de Farnesio). She had seven siblings or half-siblings, including King Charles III of Spain . and Duke Philip I of Parma . The Spanish kings Ludwig I and Ferdinand VI. were her half-brothers. 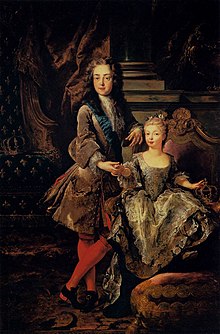 After the War of the Four Alliance , France and Spain decided to reconcile themselves by marrying Infanta Mariana to her first cousin, Louis XV of France . It was organized by Philippe d'Orléans , regent of France, for Louis XV, who was only ten years old. In return, the young Luis should marry the daughter of Philippe d'Orléans , Louise Élisabeth de Bourbon-Orléans . Saint-Simon, the French ambassador, asked for Maria Anna's hand on November 25, 1721. The exchange between the young Infanta and the Mademoiselle de Montpensier took place on the Île des Faisans ("Island of the Pheasants"). It was the place where their common ancestors, Louis XIV and Maria Teresa of Spain (1638–1683) , met in 1660. The mother had urged the companions of the well-bred child to forget their Spanish homeland as quickly as possible. Maria Anna arrived in Paris on March 2, 1721 and took up residence in the Palais du Louvre. The child patiently endured hours of triumphal procession, jubilee events and feasts and made perfect conversation in French. The young Infanta was given the nickname l'Infant Reine ("Queen Infanta"). The future bridegroom, Louis XV , was hardly enthusiastic . who was dismissive and lazy towards the child and avoided her wherever he could. The couple could not be married until Maria Anna reached a more mature age. 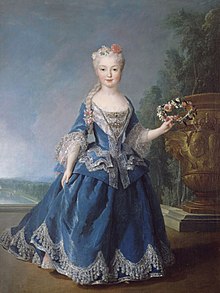 According to the regent's mother, Elisabeth Charlotte von der Pfalz , Maria Anna was the "sweetest and most beautiful little thing" and made considerable jokes for her age. Her education was placed in the care of Marie Anne de Bourbon , an illegitimate daughter of Louis XIV and Louise de La Vallière .

Their presence in France was no longer wanted. Under the influence of Prime Minister Louis Henri, Prince of Condé and his lover Madame de Prie , the decision was made on March 11, 1725 to send seven-year-old Maria Anna back to Spain. The Prince of Condé offered his younger sisters Élisabeth Alexandrine (1705-1765) and Henriette Louise (1703-1772) as marriage candidates. In contrast to Maria Anna, they were old enough to get married and have children.

The situation was compounded by the Spanish rejection of Louise Élisabeth d'Orléans, whose husband had died. Since their marriage did not go through, the Spanish royal family refused to support her and sent her back to France with her sister Philippine Élisabeth. Mariana left Versailles on April 5, 1725 and traveled to the border, where she and Orleans' two daughters were exchanged. Louis XV later married Maria Leszczyńska , who was more interesting than Maria Anna, in September 1725 and Maria Anna's sister, the Infanta Maria Theresia Rafaela of Spain married the son of Louis XV. in February 1745.

Their arrival in Spain was received as a great insult and resulted in a diplomatic rift between Spain and France. Offended Spain signed a treaty with Austria , the Treaty of Vienna , while England seeks support from France. At first Maria Anna remained unmarried. She was still entitled to the throne, but with the birth of her younger brother Philip in 1720, she moved back in line to the throne. Talks with the Kingdom of Portugal in 1727 about a marriage were negotiated by the Portuguese ambassador, the Marquis of Abrantes. A double wedding was planned. Maria Anna would marry the Infanta José , "Prince of Brazil", son and heir of João V of Portugal. Her older half-brother Ferdinand, "Prince of Asturias", would marry José's sister, Infanta Bárbara. Maria Anna married the Prince of Brazil (traditional title for the Portuguese heir to the throne) on January 19, 1729 in Elvas, Portugal. The Prince of Asturias (traditional title for the Spanish heir to the throne) married Infanta Bárbara the next day in Badajoz. Until her husband's accession to the throne in 1750, she was dubbed '' Her Royal Highness, the Princess of Brazil ''.

Mariana and José had a close relationship. The couple loved hunting, as well as music - Maria Anna Victoria was an accomplished singer. It promoted Italian opera singers and the theater, but was still very religious. Even so, her husband ran a mistress farm. During their marriage, Maria Anna gave birth to eight children, four of whom survived childhood.

María Ana of Spain, Princess of Brazil by Domenico María Sani, first half of the 18th century

Her first child, Infanta María , was given the title of '' Princess of Beira '' as heir to the throne. Two of Maria Anna's daughters remained unmarried. Her daughter Infanta Mariana Francisca was proposed as the bride for the Dauphin of France , son of Louis XV , but Maria Anna refused the plan. When her other daughter, Infanta Doroteia, was proposed as the future wife for Philippe Égalité , Maria Anna refused again. Their youngest daughter Infanta Maria Franziska Benedita married José , Prince of Brazil, a grandson of Maria Anna.

After the death of her father-in-law in 1750, her husband became King of Portugal , which had large areas in South America. Joseph I left the government of the state to Sebastião José de Carvalho e Mello, Marquês de Pombal , who used his power to reduce the Church's influence at court. Mariana and her daughters did not like Pombal's influence on Joseph I. Her husband developed severe claustrophobia after the Lisbon earthquake that killed 100,000 people on November 1, 1755 . This caused the king to feel `` walled in '' inside buildings. So the royal court moved to an extensive complex of tents in the hills of Ajuda . It was Pombal who organized the reconstruction of Lisbon in the aftermath of the earthquake.

In 1774 King Joseph I was declared unable to rule due to a mental illness and Maria Anna took over the reign of her daughter Maria until his death in 1777. Politically completely disinterested, the government largely left the government to Pombal.

The couple had the following children: