Maria Theresia Antonia Rafaela of Spain (Spanish: María Teresa Rafaela de Borbón ) (born June 11, 1726 in Madrid , †  July 22, 1746 in Fontainebleau ) was a Spanish infanta from the house of Bourbon-Anjou and by marriage Dauphine of France .

Maria Theresa was the second daughter of the Spanish King Philip V (1683–1746) and his second wife Elisabetta Farnese (1692–1766), daughter of the Duke of Parma and Piacenza , Odoardo II Farnese , and Dorothea Sophie von Pfalz-Neuburg . Her paternal grandparents were Louis de Bourbon, Dauphin de Viennois and Maria Anna of Bavaria . 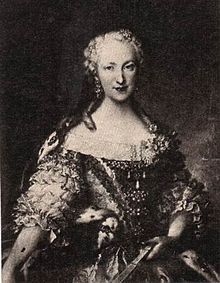 On February 23, 1745 Maria Theresia married in Paris her cousin (second degree) Louis Ferdinand de Bourbon, dauphin de Viennois (1729-1765), eldest son of French King Louis XV. and his wife the Polish Princess Maria Leszczyńska . This wedding, for the celebration of which the comic opera Platée by Jean-Philippe Rameau was premiered on March 31, 1745 , arose from the marriage policy of Catholic rulers and also strengthened the alliance of France and Spain against the arch enemy of the Bourbons: the House of Habsburg . In the same year her father-in-law took an official mistress , a commoner named Jeanne le Normant d'Etioles , née Poisson, who later became famous as the Marquise de Pompadour . This connection aroused the violent indignation of the aristocracy and especially of the crown prince couple. Maria Theresa died on July 22, 1746, three days after the birth of her only daughter Marie-Thérèse (1746–1748) of the consequences of childbirth. She was buried in the royal tomb in Saint-Denis . Despite the great mourning for the early death of his wife, her husband married the Saxon Princess Maria Josepha Carolina a few months later, on February 9, 1747 .