In 1683, shortly before the arrival of a strong Ottoman army, the imperial court fled from Vienna to Passau . During this involuntary exile, Maria Anna was born in Linz. Five days later - on September 12, 1683 - the second Turkish siege of Vienna was successfully repulsed and the Ottomans driven out again.

Maria Anna received extensive instruction in several foreign languages ​​so that she was fluent in French , Spanish and Italian . She was also very educated and gifted musically. For example, she gave singing and dancing performances when operas were performed. 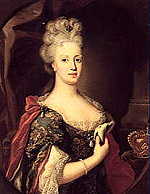 During the War of the Spanish Succession (1701–1714), the Habsburgs tried to strengthen their alliance with Portugal through a marriage alliance. In this sense, Maria Anna was married to King John V , her first cousin (the mothers were sisters), initially by distance marriage on July 9, 1708 in Vienna. Maria Anna then traveled on eleven ships to Portugal, where the wedding with her groom took place on October 27, 1708. She thus became Queen of Portugal (as the wife of the king, not as regent in her own right). The couple was saddened when initially there were no offspring. But three years after their marriage, Maria Anna had her first child, daughter Maria Barbara , who later became the wife of the Spanish King Ferdinand VI. should be. Maria Anna gave birth to five more children, including the Portuguese kings Joseph I and Peter III.

Abundant supplies of diamonds and gold mined in the overseas colony of Brazil enabled the Portuguese king to finance magnificent but very expensive buildings. In this context, the construction of the Palácio Nacional de Mafra , an extensive palace and monastery complex, which began in 1717 , should be mentioned. Maria Anna shared her husband's inclination for the construction of luxurious buildings, often organized pompous celebrations with him and sought to enhance the cultural, especially the musical, life of Lisbon.

In 1716, King John V withdrew temporarily to Vila Viçosa due to depression and left the government to his wife for this time. When he suffered a stroke in 1742 , Maria Anna took over the reign again . According to the Habsburg researcher Brigitte Hamann , however, she was not gifted for this, so that her eight years at the top of the state had negative political and economic consequences for Portugal. With the death of the king on July 31, 1750, she handed over the business of government to her eldest, 36-year-old son, the new King Joseph I of Portugal. Now the country was experiencing an upswing again. After all, Maria Anna had supported the start of the political career of the later Marquis de Pombal , who was to become Portugal's first minister under Joseph I.

After Maria Anna died in the Belém Palace in 1754 , she was buried in the Church of the German Barefoot Carmelites in Lisbon. Her heart was brought to Vienna by her confessor and buried in a heart urn created by Balthasar Ferdinand Moll in the Leopold Crypt of the Imperial Crypt of the Capuchin Monastery.

As early as 1745, the city of Mariana , which was strongly influenced by the Brazilian Baroque - 110 km southeast of Belo Horizonte , the capital of the state of Minas Gerais - was named after Dona Maria Ana D'Austria.