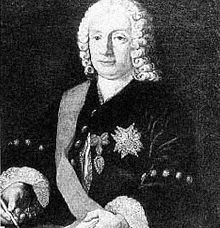 Sebastián de la Cuadra came from a family of the Basque land nobility. His father Simón de la Cuadra y Medrano was the syndic of the parishes of La Encartaciones near Balmaseda and Alcalde in the town of San Julián. His mother's name was María de Llarena y Sobrado. Sebastián was the seventh child of the two.

After attending school in his home parish, he was sent to the court in Madrid in 1700 and served as the page of José de Grimaldo , who later became Prime Minister.

In 1703 he moved to government administration and from 1705 worked in the Ministry of Foreign Affairs, Justice and Administration. 1709 moved to the War Ministry with an annual salary of 2,200 ducats. Here he rose rapidly in the hierarchy.

In 1719 he was appointed alcalde of local government in his home country, but since he could not leave the court in Madrid, he gave this office to his brother Agustín.

Government work in the second row

José de Grimaldo brought him to his ministry as an adjutant in 1720. There he was responsible for correspondence with the Netherlands and England .

Sebastián de la Cuadra was allowed to accompany Grimaldo when he held the first meeting of the Spanish Princess Maria Anna Viktoria with her fiancé Louis XV on the Île des Faisans in 1722 . arranged by France. In return, it was agreed that the French Princess Louise Élisabeth de Bourbon-Orléans , Madame de Montpensier , should take the Spanish Crown Prince Ludwig as husband.

In 1723 King Philip V appointed Sebastián de la Cuadra as his personal secretary. His duties included correspondence with France, the most important ally, Portugal and Savoy . In 1730 he also took over the court's chamber of pardons and justice.

In the same year he was inducted into the Order of Santiago . He remained unmarried throughout his life.

In 1731 he was appointed as Oficial Mayor to the official deputy of the Prime Minister, initially the Juan Bautista de Orendáin , after his death José de Patiño y Morales .

Term of office as Prime Minister

When the Prime Minister José de Patiño died in November 1736, Philip V appointed his confidante de la Cuadra as his successor. In 1738 the king made him Marquis of Villarías.

At that time Spain had only achieved part of its foreign policy goals: Queen Elisabeth had won the Kingdom of Naples for her son Karl , and in return ceded the Duchy of Parma to Austria. Spain was in opposition to the imperial Habsburgs in Vienna and Great Britain. Portugal was traditionally allied with England. In 1737 a peace agreement was reached. In the same year Spain signed a concordat with the Holy See .

The conflict with England continued, however. The War of Jenkins' Ear , which was fought mainly in the colonies of Central and South America, was an expression of the competition between England and Spain. The British captured the commercial port of Portobelo and besieged Cartagena . The peace treaty in 1748 took place only after the end of de la Cuadra's tenure.

The death of the emperor Charles VI. 1740, who died without a male heir to the throne, gave the opportunity for the War of the Austrian Succession . The aim of the Spanish royal couple was to provide Prince Philip with rulership areas in Italy, preferably with Lombardy . Spanish troops achieved successes in the campaigns in northern Italy.

At the same time, Spain strengthened its ties to France through the Family Pact of 1743 . Spain's Princess Maria Theresia Rafaela of Spain married the French Dauphin , Louis Ferdinand , to affirm .

Philip died in 1746, and Ferdinand VI. followed him to the Spanish throne. He confirmed de la Cuadra in office and left the Ministry of War with Zenón de Somodevilla y Bengoechea , Marqués de la Ensenada . While Somodevilla urged stepping up the war against Austria and England, de la Cuadra recommended a more cautious line. But since the Prime Minister did not enjoy the confidence of the new Queen, Maria Barbara de Bragança , he was dismissed in December 1746. His successor as Prime Minister was José de Carvajal y Lancaster .

De la Cuadra retained the post of pardon and justice chamber of the court.

As the king's confidante, de la Cuadra was in charge of several of the court's building projects. He coordinated the work on the new Royal Palace of Madrid and the Palace of La Granja in San Ildefonso . He supported the establishment of the Real Academia de la Historia (1738) and was the driving force behind the establishment of the Real Academia de Bellas Artes de San Fernando in 1740. He promoted and supported numerous artists and arranged them for orders from the Crown. In his Basque homeland he financed the reconstruction of the Church of John the Baptist in Muskiz.

He died in Madrid in 1766. His brother Agustín inherited his titles.