Burglengenfeld is a town in the Upper Palatinate district of Schwandorf in Eastern Bavaria .

The city is located on the Naab between Regensburg , Schwandorf and Amberg . Together with Maxhütte-Haidhof and Teublitz , the city forms a middle center , the so-called city triangle.

The core city is divided into five districts: Altstadt, Wölland, Sand, Neubruch and Vorstadt (west of the Naab).

The oldest finds point to the first settlements between 3000 and 1800 BC. Chr. The place Lengenfeld was mentioned for the first time in 1123 in a document of the monastery Ensdorf as "Lengenfelt". As early as 817, the Almenhof was a settlement in what is now the city of Burglengenfeld. The oldest row grave finds from the early 7th century point to the continuity of settlements on the site up to around AD 600 (broad ax [cutting swords] from around 600).

In 2018, while playing, a three-year-old boy found an approximately 1000-year-old coin from Byzantium , which either a former besiegers of Lengenfeld Castle lost or the guests of the lords of the castle brought with them from afar. The obverse of the coin shows a bust of Christ with a beard and a coronation robe. The reverse bears a cross with the inscription "IS-XS" and "bAS-ILe / bAS-ILe" (Christ, King of Kings).

View from the suburb over the Naab
At the end of the Pithiviers Bridge the old chancellery, above the castle, in the center of the picture the parish church of St. Vitus with the old town

The toponym with the secondary umlaut a to e (from Langinvelt) and the basic word field speaks for a comparatively old age of the place. The castle , which gave the today's city its name, was built around 900 as a protection against the invading Hungarians . After the Landshut War of Succession , Burglengenfeld was added to the newly created Wittelsbach Duchy of Palatinate-Neuburg .

The Augustenhof district of the then Saltendorf community was reclassified to Burglengenfeld on January 1, 1972. On July 1 of the same year, Büchheim , Dietldorf and parts of Höchensee, Lanzenried and See were incorporated. Pottenstetten and parts of Fischbach an der Naab followed on May 1, 1978.

Until its dissolution, the district comprised 50 communities. The largest towns were Burglengenfeld, Maxhütte-Haidhof and Teublitz . 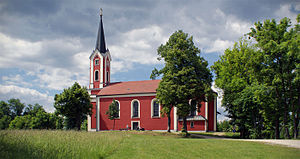 In the 2020 local elections, Thomas Gesche was re-elected in the runoff election with 53.9% of the vote.

The castle tower is a talking element for the place name. The green Dreiberg symbolizes the location of the city between three hills, Burgberg, Kreuzberg and Brunnberg. The diamond shield and the lion's head refer to the local authority of Wittelsbach. The first market seal (after 1426) only shows the castle tower and tree on Dreiberg; these figures are placed in the second seal (late 15th century) on the diamond shield, behind which St. George stands as a dragon slayer. As the patron saint of the church, Saint George was also the seal image of the pastor Hans Weiß, who sealed the market until 1425. On the occasion of the city elevation in 1542, the previous coat of arms was confirmed and increased by adding the shield head with the Palatinate-Bavarian lion. The newer official seals only show the coat of arms without St. George as a shield holder.

Even today, the castle complex , with about 2.4 hectares, the largest in the Upper Palatinate , one of the landmarks of the city. The castle now houses a Heilpädagogisches center. Public tours take place every year between May and October.

In 1986 there were reports about Burglengenfeld outside of Germany, when the demonstrations against a planned reprocessing plant in Wackersdorf reached their climax in the Anti-WAAhnsinns Festival on July 26th and 27th, 1986. Three months after the Chernobyl disaster , well-known German-speaking musicians and bands performed in front of around 100,000 people. The WAA construction failed in 1989. A memorial stone today commemorates the anti-nuclear festival on the Lanzenanger event site.

The old town is completely listed as an ensemble . Since the mid-1970s, the city has been renovating the old town with enormous financial outlay, funded by the Free State of Bavaria and in parts by the European Union . The sights include: the old town with arable houses, the historic town hall (built around 1600) with a Renaissance bridal room, the Altmannsche Schlösschen, the city wall with battlements , the medieval beer cellar, the Zaschkahof, the large chancellery (built around 1540), the Catholic Parish church of St. Vitus with epitaph (1541) by Loy Hering, the St. Anna cemetery chapel with epitaphs from the 15th and 16th centuries, the Evangelical Christ Church (former Capuchin monastery , built around 1706), the Kreuzberg church with interior decorations that are well worth seeing Castle (core from the 12th century, expanded in the 16th century), as well as the parish church and castle in Dietldorf and the parish churches in Pottenstetten, Lanzenried, Kirchenbuch and Pilsheim.

In the local cemetery , an honorary grave with a memorial stone commemorates the workers 'leader Josef Schmid , who as the former chairman of a workers' council was imprisoned several times by the Nazi rulers in the November Revolution in 1918 and died in 1945 in the liberated Dachau concentration camp as a result of an injection by the SS doctor .

There are several gyms, sports fields, the year-round swimming pool "Bulmare", an artificial turf pitch and cycling and hiking trails.

Parts of this article seem out of date as of 2017 .
Please help to research and insert the missing information .

The ASV Burglengenfeld currently playing (season 2016/17) in the national league Bayern middle. In the 1970s and 1980s, the first team was promoted to the Bavarian regional soccer league, which was then fourth class. The first team celebrated one of the greatest successes in the DFB Cup . ASV reached the second round and lost 3-0 against Werder Bremen at the Jahnstadion in Regensburg .

The TV Burglengenfeld has already won numerous Bavarian Championships, making it one of the most successful athletics clubs in Bavaria. The men of the 4 × 400 m relay are currently 3rd Bavarian champions.

The Shotokan Karate -Dōjō, which is one of the oldest karate clubs in Bavaria (founded in 1972), is also integrated in the TV Burglengenfeld . Numerous Dan bearers have emerged from him; the women's kata team was third in the Bavarian championships in 2012 and fifth in the German championships.

Another division of TV Burglengenfeld is the basketball department. The men's team of the Blizzards Burglengenfeld currently plays in the Upper Palatinate District League. Furthermore, two successful youth teams in the district and district leagues form the youth department.

In addition to the Bulmare adventure and wellness pool, there is the city library, the citizens' meeting place on Europaplatz, the self-managed youth center, a DFB mini playing field and a skater track . Burglengenfeld has owned the Starmexx adventure cinema since November 2011.

The place can be reached by car via the federal highway 93 , the federal highway 15 and the state highway 2235. After a railway connection was built in 1899, the Haidhof – Burglengenfeld railway line has only been used to transport goods to the cement works since 1967. A resumption of local rail transport on the route would be possible in principle. Corresponding reactivation efforts have been ongoing for this purpose since 2015. The next train stations are in Schwandorf and Maxhütte-Haidhof . Public transport is provided by bus routes to Regensburg (25 km), Schwandorf (18 km), Maxhütte-Haidhof (5 km), Kallmünz (8 km) and Amberg (40 km). Burglengenfeld is located in the area served by the Regensburg Transport Association (RVV).

The city operates a city bus line, a cemetery line and a surrounding area to connect the districts to the city center.

In Burglengenfeld there is only one larger employer with the HeidelbergCement cement plant. The factory of the company Hansa Metallwerke was closed in 2019 with the loss of all jobs. The NBG logistics center is also located in Burglengenfeld. In the southern district of Schwandorf, Burglengenfeld is a location for retailers, service providers and small businesses.

Burglengenfeld offers all types of schools and care facilities:

At the time of the Cold War , the city received a garrison for the first time after the establishment of the Bundeswehr . In the Naabtal barracks, which was abandoned in 1992, the air force's telecommunications equipment was stationed. On the site of the former barracks, the Naabtalpark school and sports center with a town hall, elementary and middle school, own buildings for lunchtime and all-day care and the Bulmare wellness pool has been built since the late 1990s.

Districts of the city of Burglengenfeld

Municipalities in the district of Schwandorf