Josephine Haas with her daughter Louise

Coat of arms of Josephine Haas

Josefine Haas , ennobled since 1844 under the name Josepha Haas von Längenfeld-Pfalzheim (born March 25, 1783 in Burglengenfeld ; † November 29, 1846 in Wieden near Vienna ), was a German benefactress. 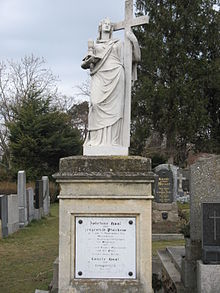 Grave in the Meidlinger Friedhof

There are several legends surrounding the life of Josephine Haas, which only partially correspond to the historical documents of her life. For example, the date of birth of the Viennese local history researcher Karl Hilscher was wrongly given as 1782, which has been stubbornly stubborn in reference works ever since and is also incorrectly displayed on the additional board for the street sign on Längenfeldgasse.

Josephine Haas was the second oldest daughter of the teacher Joseph Sebastian Haas and the daughter of the innkeeper Regina Meixner from Burglengenfeld in the Upper Palatinate . After the death of her parents in 1795 she was an orphan and was forced to look for a job in one of the larger towns in the area. According to tradition, it was recorded by the Knight of Malta, Count von Lerchenfeld , who was the Bavarian envoy in Vienna. Since a normal marriage was not possible because of the difference in class, a "left-hand" marriage probably took place. This means that the bride did not acquire any rights to the position, title or property of the count through marriage.

Nevertheless, after the death of her husband in 1844, Josephine Haas had a large fortune, from which she made a donation for the trousseau of young girls in Burglengenfeld amounting to 240,000 guilders available in the same year . In 1845 she was ennobled by the Bavarian king for this and received her own coat of arms. In 1846 other similar foundations followed for girls who got married in Upper and Lower Austria, as well as for the establishment of a children's institution in Gaudenzdorf near Vienna, where she lived. While the Austrian foundations came to an end after the First World War, the foundation in Burglengenfeld has been paid out every year since 1961 despite two inflations. At present, following a careful modernization of the foundation's conditions, bridal gifts of EUR 800 each are given annually.

Josephine Haas von Längenfeld-Pfalzheim died in her home in Wieden near Vienna in 1846 and was buried in the Schmelzer cemetery . After its extinction in 1900, her grave was moved to the Meidlinger Friedhof , where it is still located today. In 1845 a memorial plaque for the benefactor was erected in the mayor's office of Burglengenfeld. In 1894 Längenfeldgasse in Vienna- Meidling was named after her. In 1905 a memorial plaque was erected in the Haebergasse kindergarten in Gaudenzdorf.