The title of this article is ambiguous. For further meanings, see flip-flop (disambiguation)

Flip-flops (also known as flip-flops ) are beach sandals made of plastic or natural rubber with a toe strap and angled strap attachment. 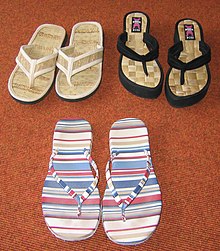 No flip-flops as they are not made entirely of plastic and / or natural rubber.

Flip-flops are among the thong sandals. Thong sandals have been around for over 3000 years; they are considered to be one of the original sandals of ancient Egypt . In Japan , these sandals, called Zōri , have been the classic footwear for centuries. It is believed that the first rubber thong sandals were made in Japan in the 1950s and conquered the USA from there, only to spread worldwide. Another theory is that the first sandals of this type were made in Brazil based on the Japanese pattern. The term flip-flop emerged soon afterwards at the end of the 50s and replaced names such as Dianette or just beach sandals . Colloquially, they often just refer to slippers and slippers, and toe thong in youth language .

In contrast to Germany, the term flip-flop (with a hyphen) is not a protected trademark in Anglo-Saxon countries, but has only been a descriptive term for this type of sandals since the 1960s. Triathlete Stefanie Schulze registered this onomatopoeic term, which is supposed to describe the sound that sandals make when walking, as a German brand flip-flop (with a hyphen) at the Trademark and Patent Office in 1997. After initial teething problems, this brand alone sold over 200,000 pairs each year. In Germany, the word mark Flip-Flop is now owned by the Pirmasens- based Bernd Hummel GmbH , which generated sales of around EUR 2.4 million in 2018

According to the manufacturer's own information, the Brazilian brand Havaianas is the world's best-selling flip-flop brand, of which over 2.3 billion pairs have been produced since 1962. The Havaianas brand belongs to the Alpargatas group , the largest shoe manufacturer in Latin America and the largest flip-flop manufacturer in the world, which is controlled by the J&F Holding, which also includes the world's largest meat company JBS . Alpargatas produced around 218 million pieces in 2014 alone in three production facilities and sells over 450 different models in over 100 countries around the world. The production facility in Campina Grande can produce nine pairs of flip-flops per second.

Since the turn of the millennium, flip-flops have been increasingly worn in everyday life as summer leisure sandals. The original purpose, however, was initially (in western countries) primarily to protect against athlete's foot in public baths and to provide thermal and mechanical protection for the soles of the feet on the beach.

Since flip-flops can be mass produced very easily and cheaply, they are also widespread among poor people in many warmer parts of the world, although they are everyday shoes under functional (protection), orthopedic (support and guidance) and hygienic (perspiration, protection from Dirt) aspects cannot or only insufficiently replace.

Flip-flops are made of plastics ( PVC / PVDC / chlorinated plastics), but also natural rubber and mixtures of both. Plasticizers are added to the normally hard and brittle plastics to make them soft and pliable . The retaining straps are simply inserted through holes in the mostly single-layer floor. The base and straps are usually made from different plastics. The floor sometimes has a cushioning function (made of foamed ethylene vinyl acetate ) and is one to two centimeters thick.

In addition to Brazil, they are almost exclusively made in Asia (Vietnam, China), which means that the manufacturing costs for a pair of flip-flops including material are in the cent range. In this respect, they are extremely inexpensive footwear.

Thong sandals made of leather or with a cork footbed ( Birkenstock ) are sometimes incorrectly referred to as flip-flops. Flip-flops, however, are characterized by their simple construction and the water-resistant plastic or rubber material and are only a subgroup of thong sandals.

As the journal Öko-Test found, certain plasticizers used in production can be dissolved by sweat and enter the body through the skin and thus damage the liver, kidneys, and the hormonal and immune systems. The WDR had commissioned a sample analysis to find out whether flip-flops could contain harmful substances. The results of the laboratory tests revealed that half of the test items were contaminated with polycyclic aromatic hydrocarbons (PAHs). According to the analysis, one of the pairs actually contained a relatively high proportion of PAHs. These substances, which are normally absorbed very well through the skin when they come into contact with the skin, are primarily considered to be carcinogenic. According to the Federal Institute for Risk Assessment (BfR), children are particularly sensitive. In four of the flip-flop models analyzed, comparatively high levels of lead and chromium were found. These cannot be absorbed through the skin, but they are environmentally harmful if one day the shoes end up in the trash. Solvents could be detected in all flip-flops , even if only in traces in some cases. In addition, two pairs of the test subjects smelled of acetophenone, which was classified by the BfR as irritating to the skin and easily absorbed through the skin . Because the materials are not breathable and are not able to buffer sweat, there is a risk of athlete's foot despite ostensibly airy sandals.

Flip-flops offer the foot no additional support, no guidance and rather little damping. For example, a kinesiological comparative study carried out in 2010 between flip-flops and sneakers shows a change in gait caused by wearing flip-flops. The standing time between the individual steps is shorter for people who wear flip-flops and smaller steps are also taken. Furthermore, it was found that the toes clung to the toes when walking due to a lack of good grip. Wearing it all day can lead to overloading and fatigue of the muscles with painful soles or cramps in the muscles of the feet or toes. There is also an increased risk of slipping sideways and dislocating a foot when running with flip-flops. In addition, when traveling long distances there is the risk of rubbing the skin with the web between the toes. People with misaligned feet , such as flat , flat or splay feet , are generally not advised to wear flip-flops due to the lack of a footbed. . The TV broadcaster ProSieben also examined the effects of flip-flops on the wearer's gait pattern in its Galileo program with Simi Motion (see web link below) and summed up:

“Based on these results, flip-flops should be viewed more as a fashion accessory and not worn for long. Shoes that support the foot in its natural posture and movement are much better. "

On the other hand, some doctors claim that wearing well-fitting sandals would be completely harmless if the feet were not previously damaged and that wearing flip-flops is basically no more dangerous than wearing other shoes.

Risk when driving a car

While wearing flip-flops is in itself harmless, they do harbor numerous dangers when driving, as a study by the University of Lüneburg has shown. The reaction of the test persons was examined alternately with flip-flops and sturdy footwear on a driving simulator in unexpected braking situations. The pre-braking times were significantly longer with flip-flops under all conditions than with sturdy shoes, which on average corresponded to a braking distance extension of 2.5 meters. Only with the flip-flop drivers were situations found in which the driver got caught between the pedals during braking maneuvers, slipped off the pedal or got stuck on the pedals. About a third of drivers with flip-flops slip off the brake pedal at least once, and almost half miss the pedal at least once.

According to a survey of 2000 motorists by the polling institute Forsa , 56 percent believe that wearing flip-flops when driving a motor vehicle is not allowed. On the other hand, there are no prohibitions in this direction in the Road Traffic Act (StVO). Riding barefoot or wearing socks is also allowed. There is therefore no penalty for a traffic control . The situation is similar in Austria and Switzerland. However, if a traffic accident does occur, case law assumes that driving a motor vehicle with flip-flops or other unsuitable footwear constitutes a violation of the driver's duty of care, which must always be assumed in accordance with Section 1 of the Road Traffic Act . Is wearing the flip-flops (partly) the cause of the accident, e.g. B. because an emergency braking by slipping off the brake pedal was unsuccessful, the imposition of a fine may follow, in the event of personal injury there is even a risk of criminal prosecution. If the driver wearing the flip-flop is not the cause of the accident, contributory negligence due to unsuitable footwear can still be attributed to him in the claims settlement process and his claims can be reduced. In the event of a comprehensive damage loss , the insurer can make recourse claims for breach of the contractual provisions due to gross negligence and thus demand an increased excess from the policyholder.

However, the legal situation is not the same in all countries. While it z. B. Since 1996 it is no longer forbidden in Italy to drive a car with flip-flops on your feet. Sometimes threatened with high fines.

A special feature is the ban on professional drivers , flip-flops and the like. Due to the regulations of the employers' liability insurance association or the accident prevention regulations issued by the German employers liability insurance association . Section 44 (2) of the accident prevention regulation "Vehicles" (BGV D29) states: "The driver of the vehicle must wear footwear that surrounds his feet in order to drive the vehicle safely."

When visiting the Italian Cinque Terre National Park in the Liguria region , hiking with flip-flops is to be banned and, from 2020, sanctioned with fines between 50 and 2500 euros. The reason for this is the increasing number of foot injuries among hikers with unsuitable footwear and the associated rescue of injured tourists, which also increased the number of helicopters.