Oberviechtach is a town in the Upper Palatinate district of Schwandorf and a state-approved resort .

Oberviechtach is located in the Upper Palatinate Forest Nature Park on the Steinbach .

Oberviechtach in Nordgau (Bavaria) was first mentioned in a document around 1130. In 1337 it received market rights as "Viechtach". During the Hussite Wars , the city was destroyed twice, in 1420 and again in 1432. In 1580 a school was mentioned for the first time during a state visit , with a negative verdict. The place belonged to the Rentamt Amberg and the district court Murach in the Electorate of Bavaria .

In the course of the administrative reforms in the Kingdom of Bavaria , today's municipality was created with the municipal edict of 1818 .

In 1913 a railway line from Nabburg via Oberviechtach to Schönsee was completed. In 1952 Oberviechtach was raised to the status of a city and in 1961 a garrison city through the entry of Panzergrenadier Battalion 122.

Until the regional reform in Bavaria on July 1, 1972, the city was the seat of the Oberviechtach district . With the district reform, the city lost the district office and other important offices. The Oberviechtach district, with around 15,000 inhabitants, was the second smallest district in the Federal Republic of Germany and the smallest district in Bavaria and one with a low average income. It was dissolved in the course of the regional reform in Bavaria and merged with the districts of Burglengenfeld , Nabburg and Neunburg vorm Wald as well as the previously independent town of Schwandorf in the district of Schwandorf .

In 1946, the previously independent communities Eigelsberg and Hof and parts of the dissolved community Nunzenried were incorporated. On January 1, 1972, Lind and Obermurach were added. On July 1, 1972, Pullenried and Wildeppenried followed with the areas of Pirkhof incorporated in 1945 or 1946 . Langau was added on July 1, 1976 .

Between 1988 and 2018 the city grew by 298 inhabitants or 6.3% from 4,732 to 5,030. Population development in the municipality of Oberviechtach taking into account the incorporations: 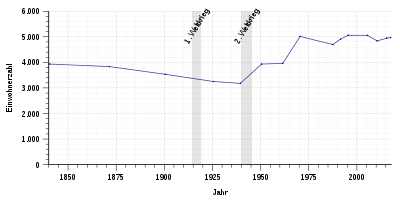 Allocation of seats in the Oberviechtach City Council (March 16, 2014)
A total of 16 seats

The seat of the 1st mayor is located under the PWG's seats.

After the local elections on March 16, 2014, the 16 seats of the city council are distributed as follows:

Heinz Weigl (non-party voter group) has been mayor of the city since May 2008.

His predecessor was Wilfried Neuber (also a non-party voter group), who had been in office since 1989.

The coat of arms of Oberviechtach shows a green, rooted spruce standing on a green meadow on a silver background. The central element, the spruce, is intended to refer to the spruce forests that are located around Oberviechtach and that gave the city its name ( Oberviechtach ).

Sponsored and partner cities of Oberviechtach are:

The Ortenburg-Gymnasium in Oberviechtach also maintains school partnerships with the following schools and regularly conducts student exchange programs with them:

The Doktor-Eisenbarth-Schule Oberviechtach maintains intensive cultural exchange within the framework of the EU-Comenius school partnership with:

Furthermore, since 1984 there has been a sponsorship with the 2nd company of the Panzer Grenadier Battalion 122, which is located in Oberviechtach.

On October 8, 2011, a memorial was unveiled in Oberviechtach in memory of the September 11, 2001 terrorist attacks on the World Trade Center in New York City . It consists of the artifact # H-0031a, a 650 kg piece of steel girder from the remains of the destroyed twin towers. This steel part lies on a block of Upper Palatinate granite. In front of it is a replica of the twin towers made of glass. Regional President Brigitta Brunner gave a speech at the inauguration of the memorial. She stated that this monument stands for the rejection of any ideological radicalism and political extremism and is a commitment to social tolerance and social cultural diversity.

The inauguration event of the monument was already disrupted by neo-Nazis . As a result, they more or less openly called for the monument to be demolished.

There is a city chapel in the city, which was re-established in 1988 on the initiative of the Ludwig Berger city council. In 2007 the orchestra took part in the traditional Steuben Parade in New York City with more than 40 musicians .

The Doktor Eisenbarth Festival, in which the story of Johann Andreas Eisenbarth , who was born in Oberviechtach, is told, is performed annually on the market square .

The city is a state-approved resort. Gold mining was carried out in Oberviechtach in the Middle Ages and early modern times.

Bundesstrasse 22 ("Ostmarkstrasse") runs through Oberviechtach . The nearest motorway connection ( A 93 ) in Nabburg is around 20 km away. The nearest train station on the Regensburg – Weiden railway line is also in Nabburg.

Until 1976, passenger trains ran from Nabburg to Oberviechtach and on to Schönsee . In 1995 freight traffic was also stopped; the railway line is now a cycling and hiking trail .

Since 1961, Oberviechtach has been home to the Bundeswehr's 122nd Panzer Grenadier Battalion, which is important for the city . Until December 31, 2002, Oberviechtach was the seat of a site administration for the Bundeswehr sites in the districts of Schwandorf and Cham with 700 civilian employees for 5,000 soldiers.

Oberviechtach has a central high school for the region, the Ortenburg high school, a primary school, a middle school with M-Zug and all-day care, the doctor-Eisenbarth-school , a special school and a state-recognized vocational school.

Oberviechtach has several tennis courts, a multi-purpose hall, a triple gymnasium, the Jahn Stadium and an outdoor pool. The TSV Oberviechtach e. V. has a soccer field and an archery range on its premises. There are children's playgrounds in the city and in some districts.

Municipalities in the district of Schwandorf