The district of Cham is assigned to planning region 11 (Regensburg). It is a funding area according to the Bavarian regional funding programs, the joint task "Improvement of the regional economic structure" and Objective 3 funding area of ​​the European Union. The district of Cham borders the Czech district of Pilsen (Plzeňský kraj) in the east over a length of 71.6 kilometers . The region is therefore an eligible area under the European INTERREG and PHARE programs.

The district borders counterclockwise (starting in the north) on the districts of Schwandorf , Regensburg , Straubing-Bogen and Regen . It borders the Czech Republic in the northeast and east .

Bridge to the east

With a border of around 70 km with the Czech Republic, the Cham district has a bridge function to the east. The meeting of people plays a role in this, expressed in partnerships and institutions such as the cross-border pilgrimage , encounter and environmental education center "Haus zur Aussaat" Neukirchen b.Hl.Blut or the youth education center in Waldmünchen . In order to cope with the challenges of the eastward expansion of the European Union, joint projects such as those in the municipal action alliances “Künisches Gebirge” and “Cerchov” are carried out.

The verifiable history of what is now the district of Cham begins in 748. The Regensburg monastery of St. Emmeram founded the “Cella”, the original parish in Chammünster. The seat of the secular rule of the Mark Cham were initially the royal court districts of Cham and Roding. The Reichsburg Cham, mentioned in 976 as “civitas chamma”, with the surrounding castles Runding , Haidstein , Chamerau and Wetterfeld was the military center of the Mark on the border with Bohemia.

Numerous local foundations fell into the eleventh century; In the twelfth century, the important monasteries Reichenbach and Walderbach were founded in the Regental , which promoted the settlement of the area until the Reformation. After 1667 they pioneered the re-Catholicization of the Upper Palatinate.

The border region was particularly hard hit during the Hussite Wars in the 15th century, and the Further Drachenstich takes up this topic in a festival. The theme of an open-air play ( Trenck der Pandur in front of Waldmünchen ) is also the War of the Austrian Succession from 1741 to 1745.

On January 1, 1939, as everywhere in the German Reich, the designation district was introduced. Thus the district offices became the districts of Cham, Kötzting, Roding and Waldmünchen.

In the course of the regional reform on July 1, 1972, a new, significantly larger district of Cham was formed from the following components:

With the accession of the neighboring country of the Czech Republic to the European Union on May 1, 2004, the decades-long isolation from the east was finally overcome.

On May 25, 2009, the district received the title “ Place of Diversity ” awarded by the federal government .

The western district clearly benefits with population increases of between 20 and 44% in the period from 1988 to 2018, while the eastern district, especially on the border, recorded losses of up to 16% in this period.

Population development in the district of Cham from 1840 to 2017

In addition to the political parties, the Cham district is traditionally strongly influenced by numerous regional voter communities.

CSU, GLLW, HBL and Grenzfahne form a parliamentary group and thus have an absolute majority in the district council.

A partnership with the Lichtenrader Volkspark in Berlin - Lichtenrade has existed since 1983 .

In 1992 a partnership was established with the Saxon district of Bautzen .

The district of Cham has a diversified medium-sized economic structure in handicraft, trade, industry and services. The spectrum ranges from traditional wood processing companies to high-tech companies in the fields of mechanical engineering, electrical engineering, plastics technology and mechatronics. A total of around 9,000 companies are located in the Cham district, including some with over 1,000 employees.

Networks such as the “Lebens- und Wirtschaftsraum Landkreis Cham e. V. ”or regional clusters in the areas of mechatronics and wood / forestry shape the cooperation.

In the 2016 Future Atlas, the Cham district was ranked 266 out of 402 districts, municipal associations and urban districts in Germany, making it one of the regions with a “balanced risk-opportunity mix” for the future. In order to promote the digitization of the region, including one was in the district of Cham incubation center set up and a self-propelled for digital infrastructure established that with federal and state funding, a circular-wide fiber optic network built and leased.

→ Main article : List of district roads in the Cham district

The main traffic artery of the rail network in the district of Cham is the Schwandorf – Cham – Furth im Wald (–Pilsen) railway line , which was built in 1861 by the AG der Bayerischen Ostbahnen up to the state border. From Schwandorf you can change trains in the direction of Weiden, Nuremberg or Regensburg or Munich. 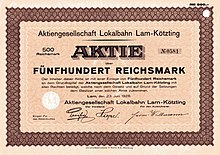 The Bavarian State Railways made the city of Cham the starting point for two local railways more than thirty years later:

A cross-connection into the Danube valley to Straubing was established by the former in Miltach in 1905 with the completion of the Straubing – Miltach railway line , while the continuation from Kötzting to Lam came about as early as 1893 by the local railway company Lam – Kötzting . Finally, in 1928 the Regentalbahn (RAG) made Blaibach station the starting point for a line to Viechtach, completing the Gotteszell – Blaibach line . Regardless of the railway network that was created in this way, the Falkenstein market received a line from Regensburg in 1913 and the town of Rötz from Bodenwöhr Nord via Neunburg vorm Wald in 1915.

In addition to the alex trains from Nuremberg and Munich via Schwandorf – Cham – Furth to Prague, the Länderbahn also operates the “ Oberpfalzbahn ” passenger service on the entire 109 km network. 32 km of local railways were shut down in 1969, 1984 and 1991:

The information in brackets () relates to the length of the route in the district.

In 2002 the rail connections of the Upper Palatinate Railway were integrated into the existing traffic community of the district of Cham . This means that there is a transport association in the district with uniform tariffs on all buses and trains.

Since May 2008, the Cham district has been connected to the neighboring Czech district of Pilsen via the first German-Czech bus route in Bavaria.

Cities, markets and communities in the Cham district

Municipalities of the district before the territorial reform 1971/1978

There are ten nature reserves , four landscape protection areas , 22 FFH areas and at least 161 geotopes designated by the Bavarian State Office for the Environment (as of August 2016) in the district.

On July 1, 1956, the district was assigned the distinctive sign CHA when the vehicle license plates were introduced . It is still issued today.

Until the 1990s, vehicles from the old districts received special identification numbers:

A popular homonym pun that has to do with the circle is the sentence When I just got to Cham, the train to Furth was furth (away). The railway line in question is in the district.