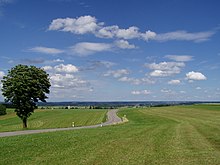 At Bedernau in the northern district

The district of Unterallgäu is centrally located in the Bavarian administrative district of Swabia . It belongs to the Danube-Iller planning region . The seat of the district administration is the district town Mindelheim , the largest city (as of June 30, 2011) is Bad Wörishofen . The district was founded in 1972 from large parts of the former districts of Mindelheim and Memmingen and some communities in the former districts of Illertissen, Kaufbeuren and Krumbach. On May 1, 1973 it was given the new name Landkreis Unterallgäu . The district area extends to the north beyond the actual Allgäu area, part of the district belongs to Central Swabia in terms of landscape . Above all, the areas around the villages of Bad Grönenbach , Legau and Böhen can be attributed to the Allgäu.

The Buxheim exclave in the west is separated from the rest of the district by the city ​​of Memmingen .

The southern district area belongs to the grassland area of ​​the pre-alpine hill country ; the northern part belongs to the Iller- Lech -Platte of the Swabian-Bavarian hill country. With the Iller in the west and the Wertach in the east, the district has two natural borders, which as border rivers roughly indicate the boundaries of the area. Two communities in the Unterallgäu ( Amberg and Wiedergeltingen ) lie east of the Wertach.

The area of the district covers 1,230.24 km². It consists of 52 cities, markets and communities. The largest north-south expansion in the medium-sized district is 54 km ( Haselbach - Legau ), the largest east-west expansion 44 km ( Heimertingen - Amberg ). The only area still free of municipalities is the Ungerhauser Forest with an area of ​​3.26 km². The northernmost village of the Unterallgäu is Kettershausen , the southernmost is Legau. The westernmost village is Lautrach , the easternmost Amberg .

The district borders in a clockwise direction in the northwest on the Bavarian districts of Neu-Ulm , Günzburg , Augsburg , Ostallgäu and Oberallgäu as well as the Baden-Württemberg districts of Ravensburg and Biberach . It also borders the independent Bavarian city of Memmingen in the west.

The district is crossed by the four long valleys of Iller , Günz , Mindel and Wertach . In between there are mostly forested terminal moraines from the Ice Age. The country opens up from north to south from broad plains to a varied hilly landscape. In the southern part of the district, the landscape belongs to the pronounced pre-alpine grassland area. At the northern edge of the district in the Günztal north of Zaiertshofen 510 and in the Mindeltal north of Tiefenried about 520 meters in altitude are measured. The terrain rises to the south and reaches its highest point at 849 meters above Oberwarlins (municipality of Böhen) on the border with the Oberallgäu district. The difference in altitude is therefore more than 300 meters. The climate of the individual district parts also fluctuates in a similar relationship. The climate is pre-alpine, with Atlantic influences predominating. In the southern district area, the climate is influenced by foehn and congested weather conditions in the Eastern Alps. Precipitation and temperature depend on the altitude. The amount of annual precipitation is between 900 mm in the north and 1,200 mm in the south of the district. This makes the Unterallgäu one of the rainiest areas in Germany.

With an average annual temperature of 6.8 to 7.3 ° C and 13 to 15 ° C in the main growing season from May to July, the temperatures can be classified as "moderately cool" or "cool". The southern district counts to the cooler zone due to the altitude of up to 845 meters. This “ climate line ” runs from Legau via Bad Grönenbach, Ottobeuren, Wineden to Warmisried.

The sedge in Benninger Ried, the only place in the world where it still grows

The Augsburg - Western Forests Nature Park , which extends to Türkheim in the south and includes the perennial area, is around 1/10 of its area in the district.

In order to preserve ecologically valuable areas and to protect endangered animal species, the district endeavors to buy up areas worthy of protection in order to be able to maintain them in a near-natural state and thus to secure the ecological balance in the subregions. Nature reserves in the district are the Benninger Ried (22 ha), the Hundsmoor (21 ha) and the Pfaffenhauser Moos (approx. 51 ha) as well as the "Kettershauser Ried" (44 ha).

Almost 500 designated biotopes guarantee the preservation of ecological compensation zones in the midst of agricultural cultivated land and for the development of unused and planned settlement areas. The list of natural monuments contains more than 100 other natural monuments , the most important of which are:

At the beginning of the 19th century, the district courts of Grönenbach , Ottobeuren , Mindelheim and Türkheim were established in today's district area in 1804 . In 1808 the Memmingen City Court was formed. The city of Memmingen became a district immediate city through the appointment of a police commissioner in 1809. All administrative districts initially belonged to the Lechkreis , from 1810 to the Illerkreis and from 1817 to the Oberdonaukreis , which was renamed Swabia and Neuburg (later just Swabia ) in 1838 .

Coat of arms of the former district of Memmingen

On January 1, 1939, the designation district was introduced as everywhere else in the German Reich . So the district offices became the districts of Memmingen and Mindelheim. 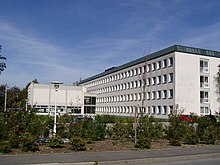 As part of the regional reform in Bavaria , a new district of Mindelheim was formed on July 1, 1972 from the following components :

On May 1, 1973, the district was given its current name Landkreis Unterallgäu . The most important rulers of the numerous sovereign territories that previously existed in the area of ​​the district were the Upper Swabian Imperial Abbey of Ottobeuren , the Swabian Fuggers and the Memminger Unterhospitalstiftung .

On July 1, 1976, the Unterallgäu district ceded the communities of Dickenreishausen , Eisenburg and Steinheim to the independent city of Memmingen, and on May 1, 1978 also the community of Volkratshofen with Ferthofen . On May 1, 1978, the district received the Traunried community from the Augsburg district, which was incorporated into the Ettringen community , and the communities Bebenhausen and Kettershausen from the Neu-Ulm district.

Ballot for the election of the district administrator on March 15, 2020

In an early district election on July 16, 2006, Hans-Joachim Weirather prevailed against his competitors Klaus Holetschek (CSU), Michael Helfert (SPD) and Doris Kienle (GRÜNE) in the first ballot. He was confirmed in office in the 2012 district election. Deputies of the district administrator are Stefan Winter (CSU), Helmut Koch (SPD) and Marlene Preisinger (FW).

The distribution of seats in the district council for the last local elections:

Coat of arms, flag and logo

The flag has blue, yellow and blue stripes with and without a circular coat of arms.

The district logo consists of the lettering Unterallgäu Landkreis and a curved line in which the colors blue, green and yellow alternate. The word Allgäu in the word Unterallgäu is written in bold and testifies to the policy of the district administrator Hans-Joachim Weirather of the further progress of the generalization of the actually Central Swabian district.

The partner county is the Polish powiat Gostyński ; the sponsoring district is Nordhausen .

With an animal population of 70,000 cows, the district is Bavaria's most milk-rich district. In the past few decades, the formerly predominantly agricultural district has undergone major economic change and is now home to a diverse range of industries from all sectors. Thanks to the willingness of the local companies to invest, the relocation of future-oriented companies and, last but not least, the diligence of the citizens, the Unterallgäu presents itself today as a solid and crisis-proof economic area with great future potential. In the Future Atlas 2016, the district was ranked 115th out of 402 districts, municipal associations and independent cities in Germany, making it one of the regions with “future opportunities”.

Important employers in the Unterallgäu district include Ehrmann AG in Oberschönegg , Multivac Sepp Haggenmüller in Wolfertschwenden , Grob-Werke in Mindelheim and Wanzl Metallwarenfabrik in Kirchheim .

The unemployment rate in November 2017 in the Unterallgäu district was 1.6%.

→ Main article : List of district roads in the Unterallgäu district

Since no railway construction was initially planned for public transport, the city of Memmingen took the initiative and built the Illertalbahn in 1862/63 , which follows the river from Ulm to Kempten from north to south.

In 1874 the Bavarian State Railroad opened a line from Buchloe via Mindelheim to Memmingen , which was extended in 1889 to the Württemberg State Railroad in the direction of Leutkirch - Kißlegg .

In the following years local railways supplemented the line network:

A special feature was the line from Türkheim-Bahnhof - Bad Wörishofen, opened by the local railway company Wörishofen in 1896, which was operated electrically until 1939. 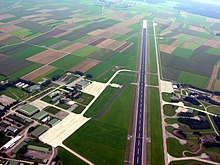 The district is also connected to air traffic via Memmingen Airport .

There are two clinics in the district in Mindelheim and Ottobeuren .

Fugger Castle in Babenhausen in Swabia 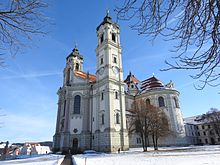 Basilica in Ottobeuren from the northwest

The Upper Swabian district is known for its many sights. The west was originally shaped by the imperial city of Memmingen and the surrounding monasteries, while the east of today's district with the rule of Mindelheim was a Bavarian exclave in Upper Swabia for a long time . The biggest sights include the large baroque monastery complex that dominates Ottobeuren, the Ottobeuren Benedictine abbey . This testifies to the wealth of the former imperial monastery, which shaped the entire area and had rich property. The former Carthusian monastery of Buxheim , also a free imperial monastery, acquired little contiguous land ownership outside the monastery area around Buxheim, but with its three carpenter churches, like Ottobeuren, is one of the highlights of the Upper Swabian Baroque Route .

The north of today's district, like a small part of the east, was shaped by the Fuggers . They built the Fugger Castle in Babenhausen in Swabia and the Fugger Castle in Kirchheim in Swabia . The district town of Mindelheim impresses with the small old town with the Jesuit church and the area around St. Stephan as well as three gates from the Middle Ages. The Mindelburg towers over the city and testifies to the former rule. For example, the "father of the mercenaries", Georg von Frundsberg, resided there . Emperor Maximilian I often visited him in his castle.

Numerous other architectural monuments in the Unterallgäu district testify to the rich history of Central Swabia.

On 5 August 1974 the district was the since July 1, 1956 valid for the county Mindelheim distinguishing marks MN assigned. It is still issued today.

Until the 1990s, vehicles from the old district of Memmingen received license plates with the letter pairs AA to DZ and the numbers from 100 to 999.

The introduction of the new UA license plate failed at the time due to massive popular protests.