Robert Landfermann (born May 28, 1982 in Oberwinter ) is a German double bass player and composer of creative jazz .

Landfermann received classical guitar lessons from the age of seven. In 1998 he switched from the electric bass to the double bass, on which he was taught by Gunnar Plümer in Bonn. From 2002 to 2009 he studied with Dieter Manderscheid at the Cologne University of Music . Between 2002 and 2004 he belonged to the JugendJazzOrchester NRW and from 2003 to 2005 to the Bundesjazzorchester under the direction of Peter Herbolzheimer . In 2008 he was a member of the European Youth Jazz Orchestra of the EBU . He also took lessons and completed workshops with musicians such as Mark Dresser and Mike Richmond.

He has worked on club and festival concerts and CD releases with musicians such as John Scofield , Lee Konitz , Charlie Mariano , Barre Philipps , John Taylor , John Hollenbeck , Joachim Kühn , Chris Potter , Lenine, Tomasz Stanko , Django Bates and Dave Liebman . In 2006 he founded the trio The Friendly Takeover with Jonas Burgwinkel and Niels Klein , his first band as leader. Since 2006 he has been part of Pablo Held's trio ; he was also a member of Matthias Schriefl's Shreefpunk , with whom he also curated the jazz-o-rama series at the Arttheater in Cologne . Since 2008 he has presented the concert series “Not without Robert” in the Cologne Loft , in which he appears with various musicians. The theme of the series is improvised music with interesting personalities from German jazz who had never played together like this before.

Concert tours have taken him to over 50 countries on all continents. Together with Frederik Köster , Pablo Held, Jonas Burgwinkel, Tobias Hoffmann and Sebastian Gille , he is part of the Cologne jazz collective KLAENG , which organizes concerts and festivals and operates the KLAENGrecords label.

From 2011 to 2019 he taught jazz double bass at the Folkwang University of the Arts . He has been a professor at the Mannheim University of Music since 2019 . 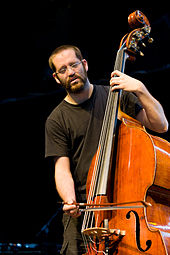