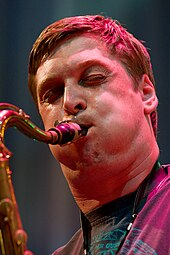 Klein started playing the saxophone at the age of thirteen . After graduating from the Lothar-Meyer-Gymnasium in Varel, he studied saxophone with Frank Gratkowski and Claudio Puntin, as well as composition and arrangement, from 1998 at the Cologne University of Music . From 1998 to 2000 he was a soloist and composer with the Federal Jazz Orchestra (BuJazzO). In 2000 he and his Niels Klein Oktett won the Jazzpodium Niedersachsen. From 2001 to 2009 he was a member of heavytones , the band of the television show TV total , with which he accompanied rock and pop musicians such as Lionel Richie , Busta Rhymes , Anastacia and Michael Bublé ; He is represented with a composition on the group's 2006 album Heavytones .

Niels Klein 2013 at the KLAENG Summer Festival in Odonien Cologne

In 2002 he appeared as coleader of the Firomanum group at the Jazz Baltica Festival . In 2004 he received the support price of the state of North Rhine-Westphalia for music , and the first album by the Niels Klein Trio (with Dietmar Fuhr and Nils Tegen ) was released. In 2005 he put together the Niels Klein Tentett on behalf of the WDR , for which he composed a 90-minute program that was performed at the Traumzeit Festival in Duisburg and at the Jazz Cologne Festival in Cologne. In the same year he composed a mass for choir and double wind quintet for the ensemble O-Ton. His third stream composition Refractions , for which he was awarded the European Composer Prize of the City of Berlin , was premiered jointly by the Federal Jazz Orchestra and the Federal Youth Orchestra in 2009 . In 2011 he received the WDR Jazz Prize as a composer .

Since 2006, Klein has designed the Jazz-O-Rama concert series in Cologne's Artheater with Oliver Leicht and Matthias Schriefl . He took part in tours and CD recordings (2005) with the Frank Wingold Quartet ("Clairvoyance"), Underkarl ("Goldberg Variations"), Florian Ross ("EightBall") and the James Choice Orchestra . In 2008 he led the European Jazz Orchestra on a European tour; In 2009 he also conducted the NDR Bigband . Together with Jiggs Whigham , he has led the Federal Jazz Orchestra since 2011.