University of Music and Dance Cologne

The Cologne University of Music and Dance is one of the largest music academies in Europe and is located in the north of Cologne's old town . It is also known under the name Hochschule für Musik Köln, which was valid until 2009 . Colloquially, the term Musikhochschule Köln is still very common. 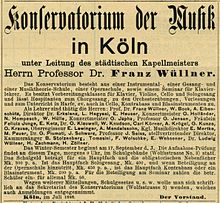 The Musikhochschule Köln is Germany's second oldest music academy after Würzburg (1804) and began in 1845 as the " Rheinische Musikschule ". Its founder is considered to be the composer Heinrich Dorn , who in 1843 took over the musical direction of the Cologne theater on Komödienstraße for an annual salary of 1,000 thalers . Together with the violinist Franz Hartmann, in 1845 he founded a "Musical College for Cologne and the Rhine Province", which moved into a house on Marienplatz behind St. Maria in the Capitol . When it was founded, there were 9 students, but in 1849 their number dropped to 3. Heinrich Dorn moved to the Berlin Opera in 1849. The composer Ferdinand von Hiller , whom Dorn proposed as his successor , also played at his farewell party on October 4, 1849 .

The city actually appointed him as his successor, so that the new conservatory could start on April 4, 1850 at Marienplatz with 17 students. The low number of pupils moved Mayor Friedrich Wilhelm Graeff to issue a call on December 23, 1850 for the formation of a “Society for the Promotion of Music Schools”. The steady expansion of the university business made it necessary to move to the Glockengasse 13-15 building in 1859 . Since then the city has subsidized the school, after 1871 the subsidy was 1,500 marks . Here it was given the name "Conservatorium der Musik in Coeln", which in 1861 was given the legal form of a legal entity under public law . The university library was established in 1872, in 1884 the school had 152 pupils and 17 free pupils and received tuition fees of 35,640 marks. On April 18, 1873, the school moved into a representative new building on the Wolfsstrasse 3 property. In 1883 the school board decided to buy the neighboring building at Wolfsstrasse 5. On October 1, 1884, Hiller, who was seriously ill, had to submit his request for discharge; he died on May 10, 1885. During his tenure, 1,382 students went through the Conservatory, including the famous composers August von Othegraven (1881–1884), Engelbert Humperdinck (1872–1877) and Hugo Grüters (1867–1871). 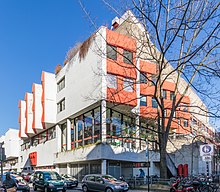 In September 1884 Franz Wüllner took over the management. During Fritz Steinbach's term of office (1902–1914), plans arose for a new university building because the number of students, which had grown to 824, could no longer be accommodated in the previous premises. The building permit for the new building planned by the architect Carl Moritz was already in place in June 1914 when the First World War loomed along with the July crisis . Steinbach resigned his office on July 1, 1914, and after Germany entered the war on August 1, 1914, construction was out of the question.

The university had to close in 1923 due to inflation , but was able to reopen on October 5, 1925. After the introduction of new study and examination regulations in 1925, music education was divided into the still existing Rheinische Musikschule and a new music college, which was then recognized as the third State University of Music after Leipzig and Berlin . After the Second World War it only offered vocational courses. Its new location was the current address at Unter Krahnenbäume 87 after the building on Wolfsstrasse was destroyed by bombs on June 29, 1943. The music college was not closed during the war years; the lessons continued, albeit under difficult conditions.

After a ceremony on May 9, 1946, the reunited music schools moved to the unused Palais Oppenheim , which was slightly damaged by the war , until they moved back into the building at Unter Krahnenbäume 87, which had been used by the WDR since April 1934 in 1953 . The state of North Rhine-Westphalia took over the sponsorship of the music college in 1968. Since 1972 it has been an organizational part of the “State University for Music Rhineland” together with the previously independent conservatories in Wuppertal and Aachen. In 1977 the university was able to move into the new building. Between 1987 and 2009 it was called "University of Music Cologne", after which it was renamed "University of Music and Dance Cologne".

There are six departments as well as one location each in Aachen and Wuppertal . In addition, the university set up the Pre-College Cologne for musically gifted people at its location in Cologne since the winter semester 2005/2006 .

With effect from the winter semester 2005/2006, a training center was set up under the name Pre-College Cologne , at which musically gifted children and young people between the ages of 10 and 16 prepare for music studies for the instruments, violin, viola, cello, double bass and piano become. Since the winter semester 2009/2010, the offer has been expanded to include all instruments used in artistic instrumental training. The teaching units, consisting of individual lessons, training in a second instrument, chamber music, harmony and general music lessons, take place on three weekends a month outside of school hours. Successfully completed subjects can be recognized in a subsequent full course upon application. The artistic direction of the Pre-College Cologne was entrusted to the professor and violinist Ute Hasenauer .

Since the winter semester 2008/09, bachelor and master degrees have been offered in the form of B of Music, B of Arts in Dancing, B of Education in Music and Master of Music. The subjects of the Bachelor or Master of Music include:

The following subjects belong to the Bachelor or Master of Arts course:

The Aachen location, the former Grenzlandkonservatorium Aachen , is characterized not only by its qualified teaching activities but also by intensive cooperation with the city opera and the symphony orchestra of the city of Aachen , which has been firmly regulated by a cooperation agreement since 1993. For example, joint opera productions but also special artistic-musical project work take place here from case to case. The Aachen Theater also offers music students the opportunity to complete job-related internships in their departments.

A " Association of Friends and Supporters of the University of Music in Aachen eV " set up here provides the necessary financial and logistical support for the students there. After an extensive restoration and modernization of the building wing in the winter semester 2011, the Aachen department has been brought up to date with a modern music college and the number of students has increased significantly.

172 students study in the Wuppertal location. It emerged from the Wuppertal Conservatory, which was attached to the Cologne University in 1972. Since 2008 he has been in the old district court in Barmen am Sedansberg. In May 2010 the building was renamed “ Günter Wand Haus”. A special feature here is the only chair in Europe for mandolin and a salon orchestra .

In cooperation with all 23 German music academies of Cologne University in the Palazzo Ricci operates in Montepulciano , the European Academy of Music and Performing Arts as a home for young musicians from all over Europe. Since 2007 the festival week of European music academies has been invited. Each year, under the auspices of the Ministry of Foreign Affairs, a region presents its music and young artists. It arose from the Cantiere Internazionale d'Arte festival founded by the Cologne composer Hans Werner Henze in 1976 , which is still organized today in cooperation with the municipality and the province.

The Association of Patrons of the University of Music and Dance Cologne supports the university with its own event formats (e.g. the chamber music series Spitzentöne ), the award of the Roderburg Opera Prize (for the first time in 2019), the promotion of young talent and the provision of financial resources.