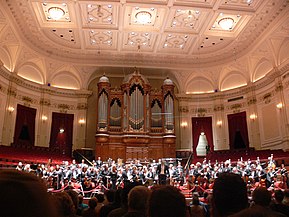 The Concertgebouw Orchestra was founded in 1888. That year, his venue was opened, the Koninklijk Concertgebouw in Amsterdam, after which it is named. For the 100th anniversary in 1988, Queen Beatrix awarded the orchestra the title Koninklijk ('Royal'). The extraordinarily round sound of the ensemble was and is largely shaped by its venue. The orchestra also plays at times at the Dutch Opera , the leading opera house in the Netherlands.

The first chief conductor was Willem Kes (1888–1895). During the extraordinarily long tenure of Willem Mengelberg (1895–1945), it achieved world fame as one of the most virtuoso orchestras of the time. His successors Eduard van Beinum (1945–1959), Bernard Haitink (1961–1988), Riccardo Chailly (1988–2004) and Mariss Jansons (2004–2015) were able to maintain its importance among the world's best orchestras. Since the beginning of the 2016/17 season, the Italian Daniele Gatti has held the position of chief conductor of the Royal Concertgebouw Orchestra. Gatti was released on August 2, 2018 on allegations of sexual misconduct.

In 2006, a committee of editors-in-chief from leading European music magazines voted the Royal Concertgebouw Orchestra second among all European orchestras, just behind the Vienna Philharmonic .

In 2008, the British trade magazine Gramophone voted it the number 1 of all orchestras in the world through a survey of music critics.

A survey of 16 music critics from all over the world, organized by the music website Bachtrack in 2015 , produced a list of the world's best orchestras with the Berlin Philharmonic in first place and the Concertgebouw orchestra in second place.