De Nederlandse Opera was founded shortly after the end of the Second World War as a repertoire company with a permanent ensemble . At that time the company had its headquarters in the Stadsschouwburg Amsterdam , a theater des fin de siècle on Leidseplein in Amsterdam, but also regularly showed its productions in The Hague , Rotterdam , Utrecht and other Dutch cities.

In 1964, the switch to the Stagionesystem and the renaming in De Nederlandse Operastichting (German: Dutch Opera Foundation ) took place. Since then, a separate ensemble of guests has been put together for each production.

Since 1986 the main venue of the DNO has been in the Muziektheater , a modern building designed by the architect Cees Dam . From then on the company was called De Nederlandse Opera . In the new building there were also regular performances of the Het Nationale Ballet , the Dutch National Ballet , and the guest programming Het Muziektheater .

The DNO has its own choir with around sixty singers, as well as a permanent technical crew, dramaturgy and management. Since the company does not have its own orchestra, one of the numerous Dutch orchestras is engaged for each opera production, including the Royal Concertgebouw Orchestra , the Nederlands Philharmonisch Orkest (NPO) and the Nederlands Kamerorkest (NKO). 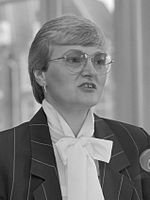 The DNO prepares eleven opera productions every year, the performances are usually sold out. In addition to the Muziektheater, the DNO also occasionally plays in the Stadsschouwburg , the Koninklijk Theater Carré and the industrial building Westergasfabriek . For several years, an opera production has been carried out every June together with the Holland Festival and the Concertgebouw Orchestra . The DNO co-produces with a number of opera houses and festivals such as the Metropolitan Opera , the Brooklyn Academy of Music and the Lincoln Center Festival in New York City , the Salzburg Festival and the Adelaide Festival in Australia .

The artistic director of the DNO was director Pierre Audi from 1988 to 2018 ; Sophie de Lint has held this position since 2018. From 1987 Truze Lodder was the commercial director. He was succeeded in 2012 by Els van der Plas, today director general of the merged institution Nationale Opera en Ballet .