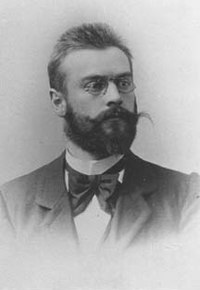 Cornelis Dopper (born February 7, 1870 in Stadskanaal near Groningen , † September 18, 1939 in Amsterdam ) was a Dutch composer and conductor .

Cornelis Dopper was born the son of a shipper. He lost both parents at an early age and then grew up in the care of a musician who had lived with the Doppers before his parents died. With him he learned to play the violin. Dopper studied at the Leipzig Conservatory with Carl Reinecke from 1888 to 1890 . From 1890 he worked as a violinist in Groningen and as assistant conductor at the Dutch Opera until it was closed in 1903. In 1906 he traveled to the USA and went on tour with Henry Savage's opera company for two years. During this time he conducted the American premiere of Puccini's Madame Butterfly . Back in the Netherlands, Willem Mengelberg offered him the opportunity to conduct his own 3rd symphony there himself. He then became second conductor of the Concertgebouw Orchestra in Amsterdam in 1908 (alongside Mengelberg). He held this position until 1931. During this time, a number of important works, for example by Debussy and Ravel , had their Dutch premieres through him. But he also conducted his own compositions. In the 1920s he began with special children's concerts, which have since become a tradition.

Dopper's work comprises around 100 compositions, including 4 operas (a 5th remained unfinished), 7 symphonies, a cello concerto, chamber music, choirs, songs and piano pieces. His style is markedly conservative, but is characterized by virtuoso orchestral treatment, is based on the German romantic tradition and also draws on folk music from his homeland. Some of the symphonies have programmatic titles with a national reference: No. 3 Rembrandt , No. 6 Amsterdam (remarkable for the last sentence, which describes Koniginnedag - the Dutch national holiday - and contains naturalistic descriptions of drunkards and the bells of the tram), and No. 7 Zuidersee .

To this day, Dopper's name is associated with a scandal that occurred on November 8, 1918 . At that time Dopper performed his 7th symphony. The progressive composer and music critic Matthijs Vermeulen , enervated by what he thought was a highly conservative work, shouted into the final chord: Long live Sousa ! . Afterwards, Vermeulen was denied access to the Concertgebouw for future concerts, but the event also had a damaging effect on Dopper's reputation.

After the Second World War, Dopper's works were hardly heard, with the exception of the orchestral work Ciaconna gotica from 1920. It was only since the 1990s that his music began to attract more attention; individual works have now also appeared on CD.