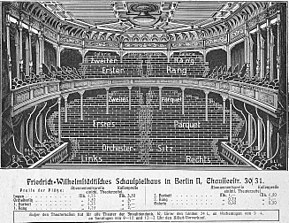 Interior view of the Woltersdorff Theater, 1910

The Woltersdorff Theater was an important operetta theater at  30 Chausseestrasse in Berlin near the Stettiner train station in what is now the Mitte district . The theater was completed in 1848 and has received new owners or operators and new names several times in the course of its existence. From 1925 to 1939 it was a cinema and after its demolition, an air raid shelter was built on this site during World War II . A hotel has been under construction here since the 2010s.

The theater was founded in 1848 as Carli Callenbach's summer theater in the Hennig brothers' garden restaurant at Chausseestrasse 26. It is said to have been the first summer theater in Berlin. The listed antics , pranks and singing games had to be short and easy to understand in order to be accepted by the visitors, mostly workers from the surrounding factories. In 1859 it was taken over by comedian Eduard Meysel , who continued it as Meysel's summer theater in the tradition that had begun. The operetta Orpheus in der Unterwelt by Jacques Offenbach ran there with great success in 1860 .

The Königsberg impresario Arthur Woltersdorff , who was already in charge of the Kroll Opera House and ran the United Theater in Königsberg in Prussia , bought the building in 1865 and expanded it, now at Chausseestrasse 27. As was customary at the time, it was named after him. The star of the house was the Ernestine Wegner soubrette . The beautiful Galathée was premiered by Franz von Suppè in 1865 . 1875–77, the actor and theater entrepreneur Emil Thomas took over the house after Woltersdorff had again withdrawn to Königsberg. After other tenants had run the facility at a loss, the building was to be demolished in 1883.

The Friedrich-Wilhelmstädtische Theater, previously founded in Schumannstrasse (name chosen with reference to its location in Friedrich-Wilhelm-Stadt ), had to leave the leased property in 1883 to re-establish the Deutsches Theater . So it turned out to be a stroke of luck that the building on Chausseestrasse was empty. The director Julius Fritzsche bought it, had it enlarged and rebuilt by the architect Felix Titz with the help of neighboring buildings , so that for the time one of the most beautiful theaters in Berlin was built here, according to the Berlin address directory at Chausseestrasse 25. The new opening under the name Neues Friedrich -Wilhelmstädtisches Theater took place on October 3, 1883 with the world premiere of the operetta One Night in Venice by Johann Strauss . Fritzsche had managed to invite the composer as a conductor. But the piece came under criticism from visitors because of its texts. Nevertheless, music theater established itself successfully here until the end of the 19th century. Already in the first year over one hundred performances of Orpheus were given in the underworld , and operettas by Franz von Suppè were often performed. The following year saw the German premiere of Karl Millöcker's Gasparone . Up until the 1890s, many Viennese operettas were performed in hundreds of performances.

The heyday of operetta performances was now past. In 1896, the publicist Raphael Löwenfeld , who founded the Schiller Theater Society in 1894, opened the theater as Schiller Theater North (next to the Schiller Theater East in the Wallner Theater ). The theater saw itself as a “high-level Volksbühne” with a focus on classical plays . The two Schiller theaters were played by the same ensemble; 22 performances per year for 22 marks were offered by subscription. This enabled both an educational mandate to be fulfilled and a profit to be made, which in turn was invested in the company, which enabled the actors to enjoy advantageous employment conditions. In 1902 the cultural site became the Friedrich-Wilhelmstädtisches Schauspielhaus , which performed plays under this name until the beginning of the First World War . From 1914 it was called again Friedrich-Wilhelmstädtisches Theater . The composer Eduard Künneke sometimes conducted his own works here. Despite the global economic crisis in 1923, there were further operettas and theater performances. From 1925 it was named Dramatic Theater and possibly belonged as a branch to the corresponding facility in Charlottenburg .

Reconstruction, demolition and installation of a bunker

After 1926 it was converted into a cinema called Metro-Palast-Theater GmbH (Lichtspiele) , with a Café Metro in the front building . The cultural facility and the neighboring house at Chausseestrasse 31 had to be demolished in 1939. During the Second World War, an air raid shelter was built here in 1942/1943 , in which pregnant women and mothers with small children in particular could seek refuge. The bunker was partially blown up in 1953 and the area leveled so that the structure could not be seen. As of 2012, all building remains were removed and the Turkish AYG Group is building a hotel here based on plans by the architects nps tchoban voss.