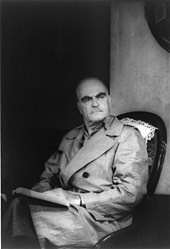 Thornton Wilder as Mr. Antrobus in The Skin of Our Teeth . Photograph by Carl van Vechten , 1948

Thornton Niven Wilder (born April 17, 1897 in Madison , Wisconsin , † December 7, 1975 in Hamden , Connecticut ) was an American writer . He won three Pulitzer Awards - for his novel The Bridge of San Luis Rey and the plays Our Little Town and We Got Away Again - and the National Book Award for the novel The Eighth Day of Creation . 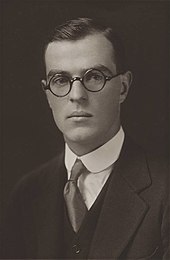 Wilder was born in Madison , Wisconsin in 1897, the son of a newspaper owner. In 1906, his father, Amos Parker Wilder, was appointed American consul general to Hong Kong and later to Shanghai . Wilder therefore spent part of his childhood in China .

He began to write plays when he was a student at the renowned Thacher School in Ojai, California, where he didn't quite fit, so that he was teased by his classmates as over- intellectual. One of his classmates later said of him: “We left him alone, quite simply alone. And he then withdrew to the library, his refuge, and learned to stay away from humiliation and indifference. "

In 1915, Wilder finished his schooling at Berkeley High School in California and began studying modern languages ​​at Oberlin College in Ohio and went to Yale University in 1918 before volunteering for the war during World War I and eight months with an artillery unit American Coast Guard served. He graduated from Yale University in 1920 with a Bachelor of Arts and published his first drama The Trumpet Shall Sound in the university magazine .

From 1920 to 1921 he attended the American Academy in Rome . He then spent two years teaching French at a school in Lawrenceville, New Jersey . In 1925 he received a Master of Arts degree in French from Princeton University . A year later his first novel, The Cabala , was published, the writing of which he had already begun in Rome. Wilder became commercially successful and widely known in 1927 with the novel The Bridge of San Luis Rey , which also brought him the first Pulitzer Prize in 1928 and was made into films several times, for example in 1929 , 1944 and 2004 . In 1928 he was elected to the American Academy of Arts and Letters .

In 1931 Wilder published a collection of one-act plays under the title The Long Christmas Dinner ; the title track was later set to music by Paul Hindemith . During these years Wilder taught comparative literature at the University of Chicago .

Wilder received his second Pulitzer Prize in 1938 for the full-length play Our Town , a three-act play that was later filmed and is still popular today and is set in the fictional small town of Grover's Corners in New Hampshire. Our Town is the best-known example of Wilder's special dramatic technique, which works with a narrator, the so-called "game master", who to a certain extent takes on the role of the ancient choir or the wall show (also called teichoskopie , Greek teichoskopia) and with minimal equipment tries to underline the universality of human experience on the stage.

Wilder received the third Pulitzer Prize for his play The Skin of Our Teeth . It premiered in 1943 with Fredric March and Tallulah Bankhead in the lead roles. The themes correspond to those of many other works by Wilder: war, epidemics, economic depression and fire as human existential experiences. By ignoring the boundaries of time and space, four characters and three acts are enough to unroll the history of humanity. In contrast to numerous other authors of the time, who emphasized the nihilism and the absurdity of human existence in their works, Wilder expresses "an astonishing optimism and an almost carefree affirmation of life" that is rarely found in this form in the West was.

During the Second World War , Wilder again volunteered for military service and was a member of an American Air Force Staff in Africa and Italy between 1942 and 1945. He was promoted to Lieutenant Colonel in the US Army Air Forces Intelligence .

He translated pieces by André Obey and Jean-Paul Sartre . From 1950 to 1951 he was Professor of Poetry at Harvard University and headed the American delegation to the UNESCO conference in Venice in 1952 .

Wilder was never married and only lived out his homosexuality in hiding. Wilder wrote a total of seven short stories, three major plays, numerous one-act plays and a large number of smaller works such as essays, " three- minute games" and scientific articles; In 1957 he received the Peace Prize of the German Book Trade and in 1959 the Austrian Decoration of Honor for Science and Art . Also in 1959 he received the Goethe plaque from the city of Frankfurt am Main . His last short story, Theophilus North , appeared in 1973. Wilder died on December 7, 1975 in Hamden, Connecticut. There he is buried in the Mount Carmel Cemetery.

After the English original titles with the year of publication, the (sometimes significantly different) titles of the German translations are given, if available.

The story of the comedy The Merchant of Yonkers (1938) is complicated : it is based on Johann Nestroy's comedy He wants to make himself a joke (1842), which was heavily revised by Wilder in 1954 when The Matchmaker was re-released, which in turn served as the template for the Musical Hello, Dolly! served. The original source for all of these works was the one-act play A Day Well Spent by John Oxenford (premiered April 4, 1834).

This text is based in part on a translation of the article Thornton Wilder from the English Wikipedia , version dated November 20, 2004.