Schröder was born in Bremen as the son of a merchant family. He attended the old grammar school , where he successfully passed the Abitur in 1897. Already in school he developed literary inclinations. After graduating from high school, he moved to Munich and began studying. The gifted autodidact turned to poetry, fine arts and music. Together with his cousin Alfred Walter Heymel and in conjunction with the editor Otto Julius Bierbaum , he founded the magazine Die Insel , from which the Insel-Verlag was soon to grow. In 1901 Schröder left the Insel editorial team. In 1904 Schröder had a military year. 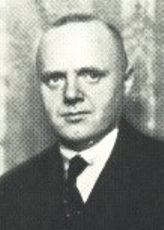 Rudolf Alexander Schröder around 1924 on a photograph by Nicola Perscheid

He lived in Bremen from 1908 to 1935. From 1909 Schröder worked - after stays (with the couple Julius Meier-Graefe ) in Paris and Berlin - as an architect in Bremen and dedicated himself primarily to interiors . In Munich he had already z. B. designed the editorial rooms on the island and designed houses in Bremen. He was a successful architect. In 1910 he received the Brussels Gold Medal and in 1913 the Ghent Grand Prix. In 1922 he designed the interior of the Bremen country house , which the architect Heinz Stoffregen had designed as the trade fair pavilion for the Hanseatic city for the German Trade Show in Munich . One of his best-known later works was part of the interior of the ocean liner Bremen, which was commissioned in 1929 . In 1913 he founded with Hugo von Hofmannsthal , Rudolf Borchardt a . a. the Bremen press .

During the First World War , Schröder was censor in the Generalgouvernement of Belgium , the German administration of the occupied country, in Brussels ; he got to know the Flemish poetry , which he later translated. In 1931 he gave up his work as an architect in order to concentrate entirely on writing (focus: poetry, translation and essay ) and to earn a living from it. At the end of 1935, Schröder left Bremen and settled in Bergen (Chiemgau) in Upper Bavaria , where he lived until his death in 1962. He saw the move at the beginning of the Third Reich as a step towards internal emigration . At the same time he joined the circles of the Confessing Church and was appointed lecturer (i.e. lay preacher) in Rosenheim in 1942 . He made an important contribution to the renewal of evangelical hymns in the 20th century.

Reading and lecture tours have taken him to many regions in Germany. During the Nazi era , he limited himself mainly to events in church rooms, but also met Hans Grimm and other national conservative authors at the Lippoldsberg poets' meeting. He worked on magazines and compilations that were aloof from National Socialism ( Neue Rundschau , Frankfurter Zeitung, etc.) and became one of the most well-known employees of Eckart-Verlag Berlin and its Eckart magazine . The editor Kurt Ihlenfeld called the Eckart circles into being, which saw their task in encounters between theology and literature, faith and poetry. A series of books by the publisher with predominantly Protestant and literary topics was also called The Eckart Circle . In addition to Protestant Christians such as Martin Beheim-Schwarzbach , Hermann Claudius , Albrecht Goes , Jochen Klepper , Willy Kramp , Albrecht Schaeffer , Siegbert Stehmann , Otto von Taube and August Winnig , Catholics such as Werner Bergengruen , Reinhold Schneider and Joseph Wittig were part of the Eckart group. From 1946 to 1950 he headed the Bremen art gallery from Bergen and was then elected honorary chairman of the art association. His hometown Bremen made him an honorary citizen . On the occasion of his 75th birthday, the Senate of the Free Hanseatic City of Bremen published the “Certificate of the Foundation of a Literature Prize”, which is to be awarded on January 26th, Schröder's birthday. From 1953 to 1958 Schröder himself was chairman of the jury for the literature prize of the city of Bremen . After the 1960 affair surrounding the award of the price for the tin drum by Günter Grass , the Bremen Senate founded the independent Rudolf-Alexander-Schröder-Foundation in 1962 ; Since then, it has awarded the Bremen Literature Prize , now endowed with € 20,000 , which is one of the oldest and most renowned literary prizes in Germany.

In 2010, the question arose in Bremen whether the city should continue to associate its most prestigious literary prize with the name Schröders, "whose relationship to the 'Third Reich' is classified as 'ambivalent' by its most benevolent critics" (Kai Artinger). In 1938, regardless of his inner emigration, he was “the first to receive the plaque for art and science from the mayor at the time, SA group leader Böhmcker,” as sources from the Bremen State Archives show. However, Schröder himself saw the honor as an award from his hometown and rejected any associated political claim to his person, as the acceptance speech shows and shows his life and work under the conditions of the dictatorship. As politically unencumbered, he was given the management of the Bremen Kunsthalle in 1946 (until 1950).

Friendships with Alfred Walter Heymel, Hugo von Hofmannsthal and Rudolf Borchardt as well as encounters with Rainer Maria Rilke , Gerhart Hauptmann and other writers of the time were decisive for Schröder's life . He also maintained contacts with Stefan George without becoming a follower of the George circle. Theodor W. Adorno invited him in 1961 to a poetics lecture at the Goethe University in Frankfurt .

His sister Dora Schröder ran the household for Schröder, who was also unmarried, and she also worked for him as a secretary. The four-time honorary doctor (Munich, Tübingen, Frankfurt am Main, Rome) died in Bad Wiessee in 1962 after a short stay in the local clinic and was buried in the Bremen family grave in the Riensberg cemetery . 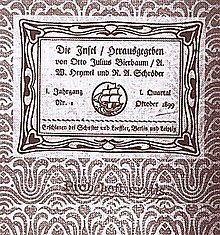 Schröder's early poetry was characterized by skepticism and romanticizing aestheticism ; he mainly used classical forms such as odes and sonnets . He wrote “Brettlgedichte” for Munich cabaret theaters.

After the outbreak of the First World War, in autumn 1914 he wrote national-conservative poems in a partially consecrated style of patriotism , for example in the poem German Oath (1914): “Holy Fatherland, in danger, your sons stand to protect you. ... "

In the mid-1930s, the publisher Peter Suhrkamp , who recognized Schröder's literary importance and his opposition to National Socialism, won him over as the author of S. Fischer Verlag . Schröder left Insel-Verlag, with whose publisher Anton Kippenberg he remained on friendly terms. After the Second World War, like Brecht, Hesse and other S. Fischer authors, he opted for Suhrkamp's new publishing house. Peter Suhrkamp realized two complete Schröder editions (1939 ff., Incomplete; 1952 ff.).

The experience of the war transformed Schröder's attitude. Patriotic tones fell silent. The humanistic legacy of the classical period and a Protestant-biblical religiosity determined his work more and more. This made him an important innovator of Protestant hymn in the 20th century. Some of his songs were recorded in church hymn books ( We believe God in the highest throne ; evening was, soon the night will come; it may be that everything falls, etc.).

Schröder's rank as an important translator also grew. He translated Homer's Iliad and Odyssey , works by Virgil , Horace , Corneille , Racine , Molière , TS Eliot , Shakespeare and published adaptations of Dutch-Flemish poetry. He also transmitted old church ( Gregorian ) hymns in the Alpirsbacher Antiphonale , the revision of which Friedrich Buchholz operated from 1946 for the church work in Alpirsbach .

In 1950, Schröder wrote the hymn to Germany , set to music by Hermann Reutter , which, at the request of Federal President Theodor Heuss, was to become the national anthem of the Federal Republic of Germany , but which did not prevail against the third stanza of the Deutschlandlied preferred by Federal Chancellor Konrad Adenauer . In the late 1950s, writers and intellectuals, with the support of Nobel Prize winners TS Eliot and Albert Schweitzer, proposed him “as a great European” for the Nobel Prize.

100th birthday of Schröder: Postage stamp of the Deutsche Bundespost from 1978

Works as an architect