The division of the earth

The division of the earth is a ballad by Friedrich Schiller , which he wrote in Weimar in 1795 . It originated in the stage of close cooperation with Goethe and is an example of the against the ideals of the Enlightenment -looking romance . 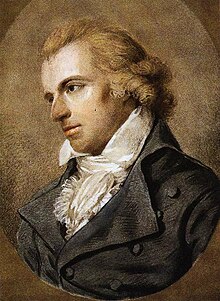 The creation falls in the time of the so-called Weimar Classic . For this section of German, but also European poetry, fabrics from antiquity are used. In addition, attempts are made to imitate the metrics of ancient poets and, as far as possible, to transfer them to German. Further examples of this period are Goethe's Iphigenie on Tauris or Wieland's Alceste . The mythical elements used turn against the Enlightenment.

“Take the world!” Cried Zeus from his heights to
the people. “Take it, let it be yours!
You gift I to Erb 'and eternal feud -
but tells you fraternally into it! "

As I hurried what hands has to settle in,
it stirred busy young and old.
The
tiller of the field reached for the fruits of the field, the junker rushed through the forest.

The merchant takes what his memory grasp
the Abbot chooses the noble Firnewein,
the king locks the bridges and the roads
and said, "The tithe is mine."

Much later, after the division already happened
seam of the poet, he came from far away -
oh! There was nothing to be seen anywhere,
and everything had its master!

"Woe is me! So should I be
forgotten by everyone alone , I, your faithful son? ”
So he let out a cry according to the lament
and threw himself before Jovi's throne.

“If you dwell in the land of dreams
,” the God replies, “don't have to worry about me.
Where were you when the world was divided? ”
“ I was, ”said the poet,“ with you.

My eye hung on your face,
On your heavenly harmony my ear -
Forgive the spirit, which,
intoxicated by your light , lost the earthly! ”

“ What to do? ”Says Zeus,“ the world is given away,
autumn, the hunt , the market is no longer mine.
Do you want to live with me in my heaven -
as often as you come, it should be open to you. "