Schiller: Pegasus in the yoke

At the Dresden Academy a . a. Trained at Cajetan Toscani , Retzsch became a professor at his training facility in 1824. He became known for his contour etchings on large poems, which were created in the classical style: Johann Wolfgang Goethe's Faust (26 sheets, 1816, with further editions), Friedrich Schiller's ballads ( Fight with the Dragon , The Song of the Bell , Walk to the Iron Hammer , Pegasus im Joche ), gallery of William Shakespeare's dramatic works (1827–46) and outlines of Gottfried August Bürger's ballads (1840). He also created portraits, romantic and mythological representations ( Genoveva von Brabant , Undine (mythology) , Erlkönig and others). 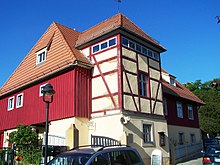 The winery has a special passion of Moritz Retzsch because his wife brought to the marriage a vineyard into the marriage. In 1813 he had the Retzschhaus in Oberlößnitz , named after him, expanded, and in 1828 he moved from Dresden to Oberlößnitz. As a winemaker , he was an honorary member of the Saxon Wine Society . In 1848 Retzsch withdrew completely to his winery.

For the winegrowers' festival of the Weinbaugesellschaft on October 25, 1840, he designed and staged the big winemaker's procession from Hoflößnitz to the Goldene Weintraube inn and then made eight sheets of outline engravings , which were lithographed as a winemaker's procession and then reproduced as lithographs. In doing so, he delivered a faithful, romanticized image - in addition to allegory and mythology - of the working world of the winemaker and the winemaker-related professions. The vintner procession took over the formal canon of court wine festivals, which had been developed since the 16th century, and developed it further in the bourgeois sense. In the regional museums there are still lithographs of the vintner's procession, for example in the Saxon Wine Museum Hoflößnitz .

The detailed representation of the sparkling wine production, which was recorded in Niederlößnitz in 1836 , the year when the later, former Sektkellerei Bussard , the second oldest sparkling wine cellar in Germany, was founded as a factory for sparkling wines on a share basis, is particularly valuable (sheet 4 of the winegrowers' train ).

In 1839 a street across from his house was named after Moritz Retzsch.

Heinrich Heine mentions Retzsch in Die Harzreise when he writes on the ascent of the Brocken :

“The strange groups of granite blocks become really visible here; these are often of astonishing size. These may well be the game balls that the evil spirits toss each other on Walpurgis Night, when the witches come riding on broomsticks and pitchforks, and the adventurous wicked pleasure begins, as the believable nurse tells it, and how it is to look up the pretty fist pictures of the master Retzsch. "