The building complex of the former inn “Goldene Weintraube” (also “Goldne Weintraube”), which is not a listed building, is located at Meißner Straße 152 in the Niederlößnitz district of the Saxon city of Radebeul , 250 meters west of the point where the inn “Weißes Roß “ The Lößnitzgrundbahn crosses with the Lößnitzbahn , a former meter-gauge regional tram . The Lößnitzbahn is now the Dresden tram line 4. The property was known as a vineyard in the 18th century, and at the beginning of the 19th century it received its first liquor license. In 1839 the rural community Niederlößnitz was founded in his rooms. 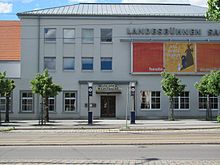 The actual guest rooms of the Goldene Weintraube

Today, in addition to residential and business premises, the extensive property also houses restaurant rooms that are used as a canteen during the day and as a theater bar in the evening, as well as a tourist information office and the facilities of the state theaters of Saxony . 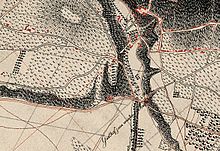 Berliner Meilenblätter (1781–1810): Meißnerischer Weinberg in the center of the picture, to the right of the inn “Weißes Roß”, at the upper edge the Hoflößnitz

Goldene Weintraube , lithograph postcard 1903. (The lower left picture shows the open spaces on the northern rear of the building)

Goldene Weintraube , lithograph postcard 1904 (The composition of the picture is not correct as the inn is actually to the left of the Lößnitzgrund mountain cut) 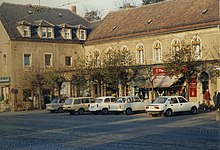 Adjacent residential and business complex on the left

In 1713, the Dresden court and justice chancellery secretary Gottfried Ludwig Lingke acquired the Huttermannschen Weinberg, which has been known as the Huttermann vineyard since the end of the 17th century (oldest known property name according to existing court records), which was located on the Serkowitz corridor west of the entrance to the Lößnitzgrund . Lingke built a first country house on his property; after him the vineyard was named Linkischer Weinberg . In 1746 Friedrich Phillip Lingke took over the inheritance.

Johann Michael Rottorf, a Dresden tailor and quarter master , took over the vineyard property for the next 21 years in 1763. 1785, with the start of construction of the new, flood-protected post and country road between Dresden and Leipzig, which passed directly below the property (see the events that led to the erection of the Weiberstein ), or in 1789, his son also asked the master tailor and mayor of Dresden , the competent Dresden office for permission to sit down guests on the street to serve the self-produced wine of his winery according to traditional customs. The request was rejected, however, because the permission to sit down had already been granted to the innkeeper of the Serkowitz inn , who was affected by the relocation of the road , and who was allowed to set up the required coach stop with inn and relaxation with the nearby inn “Weißes Roß” .

As a result, Rottorf sold his estate in 1792 to the electoral hunting expeditor Jahn, who a year later sold it to the appellate judge Dr. Meissner sold. After this it was called the Meißner vineyard around 1800 .

After Morzinek, a Mrs. Deubler was the landowner around 1811, who was followed by Karl Louis Heine in 1825. This finally got the longed-for license to serve.

According to the city encyclopedia, in 1815 Johann Gottfried Schimmel, as operator, requested the responsible Dresden court office, to which he was subject like the other scattered wineries, which were known as "Singuli", to grant a concession as an inn with accommodation and relaxation for the Meißner winery known as Zur Weintraube ; In addition, he asked to be allowed to give the inn the official name Zur Weintraube . Although the innkeepers from the "White Horse", from the inns Zitzschewig and Naundorf as well as from Brockwitz , which was further away , lodged a complaint, the request was granted. In 1821 Carl August Ludwig Heyne became the new landlord, who successfully ran the inn for life.

The construction of the oldest German long-distance railway connection Leipzig – Dresden , which was set up from 1837 to 1839, was started by both sides at the same time. This runs in the area of ​​the Lößnitzortschaften only about 300 meters south of Meißner Straße approximately parallel to it. The 8.18 km long section from Dresden-Neustadt to Weintraube was opened on July 19, 1838, at the same time the first " station " in what is now Radebeul's urban area, including the first turntable, was inaugurated near Hoflößnitz at the level of today's Radebeul-Weintraube train station to Dresden. In reference to the nearby Zur Weintraube winery and inn, the stop was named Weintraube . The innkeeper took the opportunity to open a branch of his restaurant right next to the railway, the Kleine Weintraube (Richard-Wagner-Straße 3), which later assumed the name of the station as the Weintraube station restaurant and was operated until 1955.

Due to the changes to the Saxon rural community order of 1838 , the political community Nieder-Lössnitz with about 400 inhabitants was formed on August 7, 1839 through formal separation from Kötzschenbroda , the meeting took place in the Gasthof Zur Weintraube . The reason was that the Niederlößnitzer Weinbergverein , which serves as the home district to regulate the welfare of the poor , which was founded in 1832 by 75 winegrowers scattered on Kötzschenbrodaer Flur north of Meißner Straße, had to be transferred by law from its interim status to a regular municipality. At this constituent meeting, the vineyard owner Heinrich August Hilliger was elected to the board, later the vineyard owner and naturalist Johann Friedrich Anton Dehne from Grundhof in the north was elected first community elder. The property of the inn in Niederlößnitz then also bore the fire register number 1.

In October 1840, the restoration served as a festival and exhibition venue on the occasion of the great winegrowers' festival on October 25th, whose vintner's procession from the Hoflößnitz to the grapes was recorded in a series of drawings by the painter and winery owner Moritz Retzsch . In the exhibition, products of Saxon viticulture from all over the country were shown, at the festival not only a feast and dance were offered, but also a Bengali fire on the mountain heights of the Hoflößnitz and of Cossebaude on the other side of the Elbe.

In December 1846 the inn burned down. When it was rebuilt the following year, it was supplemented by a concert and ballroom in the "acoustic style". Owner Heyne gave the newly shining restaurant the name Gasthof zur golden Weintraube in order to be able to better distinguish it from his railway restaurant Kleine Weintraube . This was a 48 cubits (about 20 meters) long structure along the platform.

The composer Julius Becker , who himself lived on his vineyard in Oberlößnitz , gave numerous benefit concerts together with amateur orchestras in the inn's concert hall, which were organized for the benefit of the Association for Healing and Natural History and the hospital in the Steinerne Haus , which it supported . The Saxon Winegrowing Society , which had 63 members and was headed by Chamberlain von Berlepsch auf Proschwitz , held its bi-monthly meeting in the inn in the middle of the 19th century.

Heine (Heyne) died in 1854, his widow sold to Gottlob Töpfer. Friedrich Wilhelm Eisold acquired the Goldene Weintraube in 1860 and managed it for 15 years. He also ran a trucking business from the property. In 1863 he added a covered bowling alley. In 1864 he founded the construction company FW Eisold , whose long-standing company headquarters were on the opposite side of the street at Meißner Straße 139 (former address Dresdner Straße 18 ) and thus on the Serkowitz municipality. Eisold gave up the restoration in the mid-1870s.

In the years to come, the operators changed very frequently. The following liquor licenses or concessions were issued for the owners: 1877 for Wilhelm Otto Nostitz including the license to hold public dance music, 1879 for Friedrich Wilhelm Pechstein, 1881 for Paul Albert Otto, 1882 for Paul J. Wilh. Möbius, 1883 for Karl Hermann Pfütze, still in 1883 for Julius Bernhard Edelmann as tenant, 1884 again for the owner Pfütze, 1889 for Friedrich August Hempel “... for holding musical plays, singing and declamatory lectures, shows of people or theatrical performances, restaurants (Realrecht), pub including brandy, regular dancing, relaxing and setting up the nativity scene. ”Its rooms consisted of:“ 5 rooms on the 1st floor, 1 room on the ground floor, 2 halls, 1 room in the first floor. Oberg., 2 veranda rooms, 1 bowling room, 1 veranda, garden, 1 awning with music hall. ”At the turn of the century, the company claimed to be“ the most beautiful and largest establishment in Lößnitz ”. Just like several competing companies did. Several shops moved into the outbuildings. In 1905 Hempel went bankrupt.

In 1923 the new owner was called Rudolf Körtel. Körtel, himself close to the National Socialists from an early age, opened his rooms to them for events, which would later pay off. At the time of National Socialism , the property became the central meeting place of the NSDAP and its subdivisions in Radebeul, after the cities of Kötzschenbroda and Radebeul were united under the name Radebeul and a quarter of a year later they were declared a district . In 1934 he asked to be allowed to install a motion picture theater in his small hall on the upper floor, which is now the theater hall. At the same time, in 1934/1935, the building ensemble was modernized according to plans by the architects Gebrüder Kießling as part of a government-sponsored job creation measure: the Wilhelminian style disappeared and gave way to a rather cool objectivity. In October 1935 the Lössnitz-Lichtspiele, leased to Richard Köppler, with 315 seats, later called the Lichtspieltheater Goldene Weintraube , went into operation. The owner called his restaurant Stadtkaffee . Since the owner Körtel had been a member of the NSDAP since 1932, he was referred to as a "Nazi activist" by the responsible authorities and expropriated according to current legislation . He came to the special camp in Bautzen , from which he was released at the end of 1949.

From the end of the Second World War until the beginning of 1950, the building served as the house of the officers of the Soviet Army . Due to the lack of space and development opportunities at its location in Gittersee , the ensemble of the State Opera Saxony moved to the Goldene Weintraube on July 15, 1950 . The small hall on the upper floor was used, the rest of the building complex serves as the main building. Only the other commercial and restaurant rooms on the ground floor were used for other purposes: from 1950 the HO continued to manage the restaurant rooms under the historical name as a restaurant and wine bar.

When the theater was able to resume its work in a spatially and technically renewed manner after the fall of the Wall and after major renovations, the restaurant reopened its doors under the old name of Goldne Weintraube . In 2011 the restaurant was closed again and remained so until 2014. From October 2014, a new tenant briefly ran the restaurant as a public theater canteen or podium for cabaret with a theater pub. "The comparatively low prices and the not easy to calculate expenses with the daily changing rehearsal plans ultimately drove the lessee to terminate the contract soon."

The newly founded Sarrasani Event GmbH is returning to Radebeul after the bankruptcy of Sarrasani GmbH in Dresden in 2016, where André Sarrasani will run the “theater bar” as the new leaseholder in the Goldene Weintraube next to the state theaters.

The further history of the property, which is now owned by the Free State of Saxony, can be found under its new function as the State Theater of Saxony , the parent company of Germany's second largest travel theater .