Magdalensberg (Slov.: Štalenska gora ) is a market town with 3529 inhabitants (as of January 1, 2020) in the Klagenfurt-Land district in Carinthia .

The area around the Magdalensberg , which is the namesake of the municipality, was considered the center of the Noricum , a Celtic kingdom, later a province of the Roman Empire . Today the largest archaeological site in Austria is located on the Magdalensberg in the area of ​​the city . The young man from Magdalensberg , a Roman bronze sculpture from the first century BC found in 1502, achieved national fame .

The Magdalensberg, which overlooks the Klagenfurt field (Slov. Celovško polje ) as well as the Zollfeld with Virunum and Karnburg , was after antiquity also a cult center in the early Cararantine period, as can be seen from excavations from this time and in particular the three-headed basin from the 8th / 9. Century. This once stood in front of the church and, according to tradition, was moved inside the church by the local pastor Pavle Zablatnik . The three-headed ( Triglaw , Slovenian triglav ) is considered a pre-Christian deity among the Slavs in general and especially among the Carantans . Hieronymus Megiser , who reports that the Portendorfer were allowed to plunder for three days on the occasion of the installation of the duke, is evidence of its importance as a carantanic central area . Partly the enthronement ceremony led across the area of ​​the parish of Herzoghof / Herzogbauern in Blasendorf (Slov.: Blažnja vas , the 'blessed village') to the Fürstenstein or in Karnburg. The numerous Edlingerhöfe in the community, whose lords, according to tradition, played a special role in the popular election of the Carantan prince, testify to this early constitutional history. The people of Edling around St. Lorenzen and the surrounding villages of Hollern and Schöpfendorf retained their special status and special rights until the end of the 15th century. Around 1500 a local Edlinger still had to perform special services, so it can be assumed that the important Slovenian reformer Primož Trubar , when he wrote the Slovenian catechism in 1550 and the Slovenian church order (Slovene: Cerkvena ordninga ), was still living on a historical one Tradition met in Carinthia.

In the late 19th and 20th centuries, the municipality became a language border, with Slovenian cultural life with the establishment of the Slovene cultural association Edinost Št. Tomaž and the Slovenian savings and loan fund ( Hranilnica in posojilnica Št. Tomaž ) also experienced a new boom in St. Thomas and radiated far beyond the municipal boundaries of that time and registered members.

On April 14, 1942, well-known Slovene families from the old parish of St. Thomas / Šenttomaž were deported (for a long time euphemistically referred to as "evacuation").

The municipality of Magdalensberg was created in 1973 through the amalgamation of the local communities Ottmanach and St. Thomas am Zeiselsberg, which have been independent since 1850. In 2013 Magdalensberg was elevated to a market town .

Magdalensberg had 2,980 inhabitants at the time of the 2001 census, 96.1% of whom were Austrian citizens. 84.6% of the community residents professed to be a Roman Catholic and 4.3% a Protestant Church , and 8.7% were without religious belief.

The municipality of Magdalensberg, in particular the old municipalities of Sankt Thomas and Ottmanach, historically belong to the Slovene dialect area of ​​the Klagenfurter Felde, which is a transitional dialect between the Slovene dialects of the Jaun Valley ( podjunščina ) and the Rose Valley ( rožanščina ). Johann Scheinigg identified it as a special variant of the Slovenian Rosental dialect in 1882, which was confirmed in the dialectological study by Katja Sturm-Schnabl based on field research. 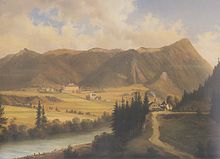 The directly elected mayor has been Andreas Scherwitzl (SPÖ) since 2009 .

The coat of arms of Magdalensberg shows a golden griffin turned (heraldically) to the left on a blue background . This is based on the representation of one of the most important ancient finds in the municipality, a 40 cm high bronze statuette from the time of the Roman Emperor Augustus discovered in 1843.

The composer and pop singer Udo Jürgens grew up in Ottmanach Castle , as did his brother Manfred Bockelmann , who is a painter and photographer. The family grave of the Bockelmanns is in the Ottmanach cemetery.

Karl Schnabl , the Olympic champion and medalist at the Innsbruck Olympic Games in ski jumping, has lived in Latschach since 2006 . Karl Schnabl was also the driving force behind the Austrian ski jumping wonder team that Professor Baldur Preiml formed in the 1970s.

Born Magdalensbergerin is the Carinthian Slovenian Katja Sturm-Schnabl , university professor for Slovene and South Slavic philology at the University of Vienna . On September 30, 2015, she was awarded the Gold Medal of Merit of the Republic of Austria by Chancellery Minister Josef Ostermayer for her commitment as a contemporary witness .

Marjan Sturm was born in Magdalensberg , has chaired the Central Association of Slovenian Organizations since 1992 and was awarded the Great Silver Medal of Honor for Services to the Republic of Austria in 2012 .

A born Magdalensberger is Bojan-Ilija Schnabl, writer and author of Slovenian and French poems and short stories with community reference, in which the community in the broader sense and the Klagenfurt field are elevated to a (central) literary figure. The anthology of meditative stories Magnolija in tulipani (The magnolia and the tulips, stories and true fairy tales from the Klagenfurt field), in which local history and the local Slovenian dialect are subtly incorporated , is also rooted in the Magdalensberg community .

Cities and municipalities in the Klagenfurt-Land district