View over Ansfelden at nightfall

Ansfelden lies at an altitude of 289  m above sea level. A. in the central area of Upper Austria . The urban area borders in the north on the state capital Linz and the city of Traun , in the east on Sankt Florian , in the south on St. Marien , in the southwest on Neuhofen an der Krems and in the west on Pucking .

The highest point with 373  m above sea level. A. is the Zirnberg (not to be confused with the Ziehberg) in the cadastral community of Nettingsdorf.

The municipal area comprises the following 14 localities (population in brackets as of January 1, 2020):

Ansfelden was first mentioned in a document around 788/91 in the Notitia Arnonis of the Church of Salzburg as "Albinsvelt". The name Ansfelden derives from Albinsvelt and Alpunesfeld ( Albuni ) (mentioned in the "Kremsmünster Foundation Deed " from 777 as part of a donation from Tassilo III. To Kremsmünster Abbey).

Originally (from 976) in the eastern part of the Duchy of Bavaria , the place in the " Ostarrichi " region belonged to the new Duchy of Austria since 1156 . Since 1490 it has been assigned to the Principality of Austria ob der Enns . During the Napoleonic Wars , the place was occupied several times.

Since 1918 the place belonged to the federal state of Upper Austria and after the annexation of Austria to the German Reich fell on March 13, 1938 to the " Gau Oberdonau ".

After the end of World War II in 1945, Ansfelden belonged to the US zone of occupation in occupied post-war Austria and to the restored state of Upper Austria.

The DP camp set up by the American military administration on the site of a former prisoner-of-war camp in the Haid district , the 121 Haid housing estate for so-called displaced persons , contributed significantly to the increase in the population . Later displaced persons , sometimes up to 10,000 people from the east, were housed there. From the mid- 1950s , Haid was expanded into a modern satellite town of Ansfeld with a large infrastructure.

Ansfelden received the municipal coat of arms on September 27, 1986 and was elevated to the status of town on September 25, 1988. On the occasion of this celebration a special postage stamp was issued by the Austrian postal administration.

During the flood of the century in 2002 , a dam broke in Kremsdorf in the area of ​​the Redersiedlung, as a result of which it was partially flooded 1.5 m. At that time, a total of 20% of the city area was flooded.

Official description of the municipal
coat of arms : “Divided diagonally to the left by a silver wavy strip from the shield base to the shield head; at the top a row of six silver organ pipes, each slightly shorter at the bottom, in
green, a silver cogwheel at the bottom, in red. “ The community colors are green-yellow-red.

The organ pipes in the municipal coat of arms awarded in 1985 refer to the Ansfelden-born composer and organist Anton Bruckner . The cog wheel stands for the importance of industry and commerce for the city, the wavy bar for the two rivers Krems and Traun .

Manfred Baumberger from the SPÖ has been the mayor since June 21, 2010. In the second election of the mayor in October 2015, he prevailed against his rival Christian Partoll from the FPÖ with 57.67% of the votes.

In the 2015 municipal council elections, the SPÖ again suffered losses of 6.15 percentage points, and with a remaining 38.2% share of the vote, it lost two more seats and, for the first time since 1949, its status as the party with the most voters. The FPÖ was able to benefit most from the losses, which with an increase of around 14.88 percentage points was able to gain a share of the vote of around 39.66% (+ 6 mandates). The ÖVP, on the other hand, lost 9.18 percentage points to only 14.77% and thus lost four of its previous nine mandates. The Greens gained slightly by 0.46 percentage points, but this did not change the number of their seats (still two seats on the municipal council). The turnout rose to 71.68 percent.

More than 16,000 people currently live in Ansfelden, including the second resident. A quarter of the population living in Ansfelden was not born in Austria and therefore has a migration background. Among other things, this is due to the former Haid refugee camp , from which many people in Ansfelden have found a new home. 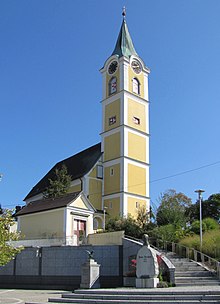 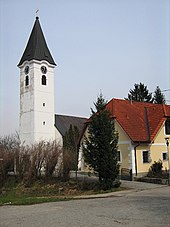 In 2011, the Upper Austrian State Garden Show was held in Ansfelden under the title “Symphony in Green” . The Ritzlhof Horticultural School provided part of the 20 hectare site and was an important partner in the planning and implementation. On this occasion, a local recreation area was created along the Krems, which will continue to exist for the population in the city and region even after the state horticultural show.

Bearer of the cultural badge

The cultural badge has been awarded to various community citizens who are committed to culture since 1996. 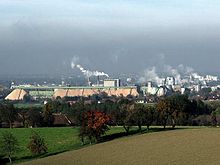 Nettingsdorf paper mill from the south. In the foreground the mountains of wood chips

Ansfelden can be easily reached by road as well as by train and air. Protests by civil associations at the beginning of this century highlighted the problem that the volume of traffic in some parts of the city exceeds the capacity of the streets.

There are two important supraregional transport hubs in the city of Ansfelden:

The A1 between the two motorway junctions is one of the most heavily traveled motorway sections in Austria. With 33.94 million vehicles per year (92,986 vehicles per day) it is in fifth place in vehicle traffic, in truck traffic the A1 in Haid ranks 6.14 million trucks per year (16,820 trucks per day in 2011 ) even in first place.

In a north-south direction, the supra-regional Upper Austrian cycle path R10 (Kremstal cycle path) runs parallel to the Pyhrnbahn route and runs from Traun to Klaus. In the Kremsdorf district, at the Nettingsdorf train station, the supraregional Upper Austrian cycle route R14 (Anton-Bruckner-Radweg) branches off, which continues in the city via Wambachstrasse to St. Florian and ends at the Abhaben-Asten power station .

Within the urban area, the districts to the north of the A 1 motorway in particular can be reached via almost continuous cycle paths. There is a cycle path along Ritzlhofstrasse between the districts of Ansfelden and Kremsdorf.

The neighboring town of Traun can be reached quickly from the Haid district via a steel footbridge parallel to the Pyhrnbahn. The state capital Linz can also be reached in around 40 to 60 minutes via the same route. From the Freindorf district, a cycle path runs parallel to Traunufer- / Kremsmünsterer Straße to Ebelsberg.

A weather-protected Bike & Ride facility is located at the Ansfelden train station.

The Nettingsdorf train station is located in Kremsdorf . The Pyhrnbahn that runs through it is now only single-tracked towards the south ( Selzthal ). Between 1988 and 1995, high-speed trains ran between Linz Hbf and Nettingsdorf, the southern terminus of which was expanded with each timetable period: first to Rohr im Kremstal , later to Kirchdorf an der Krems . Nettingsdorf station is also a shunting station for the Nettingsdorf paper mill, which is located in the immediate vicinity and connected by a siding .

The Ansfelden stop , designed as an island platform, is located in Rapperswinkel . This station is only served by regional trains of the ÖBB .

Ansfelden and all parts of the city are connected by buses operated by Wilhelm Welser Verkehrsbetriebe Traun . They usually run every hour. There is also a shuttle bus between Linz Hbf and IKEA Haid, via Haider Hauptplatz.

Future tram: There are plans to expand line 3 of the Linz tram from Traun via Haid to Nettingsdorf. The construction project is unclear, however.

The close proximity to Linz Airport also means it can be reached from the air.

Since 1995 the city has been taking action to promote a good coexistence between the city's citizens. In the beginning there were mainly educational offers (such as early childhood language support, homework supervision for children with learning difficulties), but from 2010 additional measures such as a living environment project ("Ansfelden Mit einer", since 2013), funding for democracy activities ("Jack D.", since 2011 ), Contact persons for new citizens in the city ("bridge builders", since 2012) or a welcoming culture ("welcome folder", since 2012). In order to coordinate and further develop the offers, the city has created the position of a consultant for communal coexistence in the city administration (since 2013).

Since October 2010, the city has been supported by the integration office of the state of Upper Austria and the advisory group vor.ort with its own process. The goals are to increase awareness that joint action serves everyone, to make the city more attractive, to create common and clear guidelines for integration work and to be an example for other cities.

In December 2012, the local council adopted a policy paper as a declaration of intent for good coexistence in the city. In it, politicians acknowledge that immigration has a historical tradition in Ansfelden, that diversity and diversity are seen as enrichment and that the basic attitude of political action in the city should be based on human rights.

In 1955 a shortwave transmitter was built in Fleckendorf . This system was used by Austrian radio until 1968. Then it was handed over to the Austrian military, which used it until 1996. Today the 110-meter-high former supporting tower for shortwave antennas, built in 1955, is used as a transmission tower for mobile communications.

In 1978, a 93-meter-high radio tower made of reinforced concrete was built further north of the Fleckendorf transmitter .

The Haid biomass heating plant was opened in the Haid district at the end of 2009 . When completed, it will supply around 2,000 apartments with district heating and save around 5,000 tons of CO 2 per year.

Cities and municipalities in the Linz-Land district