The Traun is a 153 km long right tributary of the Danube in Upper Austria ( Austria ). The mean discharge is 135 m³ / s, it drains most of the Salzkammergut . To the east of the Traun, the Traunviertel extends to the Enns .

The river name Traun is probably derived from the Celtic word druna ( the running one ). This river name was later adopted by the Romans.

Run of the Traun

The Traun rises in Styria in the Dead Mountains as Grundlseer Traun in a source, the Traun origin behind the Kammersee , flows through the Toplitzsee and then the Grundlsee . Between Toplitzsee and Grundlsee the course is called Toplitz or Toplitzbach .

In Bad Aussee the Grundlseer Traun unites with the Altausseer Traun (from Altausseer See ) and is also called Badausseer Traun , officially the United Traun . Shortly afterwards, at Unterkainisch , the Kainischtraun (as Ödensee Traun from Ödensee and Riedlbach-Traun from Hochmühleck) flows into it, from here it is called Koppentraun . This upper catchment area (without Ödensee) is the Ausseerland as the northern part of the Styrian Salzkammergut . The Koppentraun flows westward through a gorge with the Koppenpass and a rail connection until it turns north on the Dachstein massif and feeds Lake Hallstatt .

It is only finally called Traun after it leaves the lake . In the middle course, initially called Goiserer Traun , it crosses the inner Salzkammergut and Bad Ischl , where it takes the Ischl from the Wolfgangsee , is called Ischler Traun and then Ebenseer Traun , and maintains the north-eastern direction. It flows along the Höllengebirge and at Ebensee into the Traunsee . After leaving the lake in Gmunden on the Traunstein , she is also called Gmundner Traun , leaves the Salzkammergut mountains and enters the Alpine foothills .

At Stadl-Paura it takes in the Ager from the Attersee , its largest tributary, and flows past Wels through the flat Welser Heide and touches the town of Traun . At the border between Ansfelden and Linz , a large part of the water volume at the Traun weir is diverted to the headwater canal that feeds the Linz-Kleinmünchen power plant .

The Traun flows into the Danube in the urban area of Linz , on the border between the districts of Pichling and the industrial area harbor (factory premises of voestalpine ) .

The valley of the Traun is clearly structured and comprises the following regions upstream:

The northern part of the Hinterberger Valley (upper Kainischtraun) is no longer Trauntal in the true sense of the word, and as a valley pass landscape is more likely to be part of the inner-Alpine Ennstal region .

The lower reaches of the Traun used to be very polluted by industry (e.g. the paper mills in Laakirchen) and the inflow of the heavily polluted Ager (chemical fiber pulp mill in Lenzing) and in parts only had grade  IV. Today it has quality class I or II throughout the course, so you can see a few meters in Wels as well.

The upper course of the Koppentraun is a famous fishing lake that offers a natural river bed for several kilometers. The breakthrough of the Koppentraun is feared as a paddling water. The Traunfall near Steyrermühl is one of the few river diving spots for divers and snorkelers in Austria. 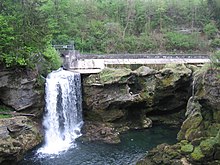 In Roman times, the Traun was navigated by flat barges from the Traunfall to its confluence with the Danube. The Traun was also very important for transporting salt and wood . The salt ships were originally sold as firewood and construction wood at their terminal port on the Danube, which, in addition to the brewing, contributed to a further increase in wood consumption in the Salzkammergut. In order to protect the forests from overexploitation, in 1509 Emperor Maximilian ordered the emptied salt barrels to be returned to their places of origin. The Traun farmers withdrew the Zillen from Zizlau (salt port on the Danube near Linz) to Stadl with their heavy horses . From here the return train to Gmunden was taken care of by the Roitham “Fallbauern” and from Ebensee to Hallstatt by the Ebenseer Rossbauern. With the return trains, food (mainly Hofkorn) for the miners and saltworkers was brought to the Salzkammergut. The shipping on the Traun is presented in the Schiffleutmuseum in Stadl-Paura .

In the Federal Army of the First Republic , under the leadership of Chief of Staff Field Marshal Lieutenant Alfred Jansa, plans to repel a German attack at the level of the Traun Line were worked out.

Today the power plants on the Traun are particularly important.

( Bottleneck capacity and standard energy capacity according to information from the respective power plant operator. Status: 2005 and 2010)

Coat of arms with Traun motifs

The Traun has found its way into the coat of arms of several cities and communities that lie on the Traun. For example, the coats of arms of Wels (“green, wavy shield foot”), Steinerkirchen an der Traun (“ wavy band”), Fischlham (“golden wavy bar”), Steinhaus (“silver wavy bar”), Stadl-Paura , (“silver wavy bar "), Desselbrunn (" flank split by silver and blue ") and Laakirchen (" silver wave bar ") symbols for the Traun. The coat of arms of Roitham am Traunfall refers to the Traunfall with power plant and bridge.