The Traunstein is a rugged, 1691  m above sea level. A. high mountain on the east bank of the Traunsee in the district of Gmunden in Austria .

Because of its isolated position in the foothills of the Alps and the walls that slope directly into the lake, it looks like a boulder in the landscape and is therefore a popular photo motif . Its striking silhouette is visible from afar, up to 150 km in clear air. That is why he is often referred to as the state watchman or "guardian of the Salzkammergut ".

In the north, the huge limestone block is bounded by the Gschliefgraben and in the south by the Lainautal . In the west the walls drop steeply into the Traunsee. In the east is the Laudachsee . Here the Traunstein is separated from the Katzenstein by the Hohe Scharte . The entire area including the Laud axis covers 145 hectares and has been under nature protection since 1963. It ranges from 480  m to 1691  m above sea level. A.

The Traunstein culminates in a small plateau between the 1666  m high Fahnenkogel with the Gmundnerhütte, the 1575  m high Traunkirchner Kogel in the southwest with the Traunsteinhaus (Naturfreundehütte) and the 1691  m high Pyramidenkogel in the northeast with the summit cross . 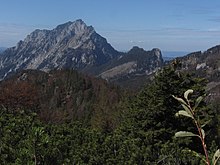 The east side of the Traunstein, seen from the Zwillingskogel.

The Traunstein consists of Wetterstein limestone as part of the Höllengebirge blanket . Its north slopes form the ceiling forehead. Two strips of Gutenstein limestone run through the rock from the lake shore to the summit region. These come to light in the fire pit and in the pitch pit. The Langbathscholle joins the Zierlerberg and the Kaltenbachwildnis to the north. This consists of main dolomite , which weathered to fine grit . Separated from the Traunstein by the Gschliefgraben, the flysch zone joins the Grünberg .

There are karst features in the limestone , such as a large sinkhole on the summit plateau.

The upstream position of the Traunstein was caused by a tectonic fault, the so-called Traun fault. This runs in a north-south direction through the Traunsee. The Höllengebirge ceiling was shifted a good five kilometers to the north and is continued to the south in the Kleiner Sonnstein .

From the beginning of December 2007, large amounts of earth and rubble began to move in the area of ​​the Gschliefgraben . Because of the impending danger, 55 houses had to be evacuated and Traunsteinstrasse closed. Extensive safety measures were able to prevent a further slide (status 2010).

On August 5th, 2019 at 11:50 a.m. there was a 1,500-ton rock fall from the south side of the Traunstein. Due to the closure of the forest road, the Mairalm was no longer accessible from the Traunsee, but only via the Laudachsee and the Scharte from the east. The clearing and repair of the streambed and the Lainautal forest road took several weeks.

Due to the altitude and the exposure, the Traunstein has very different vegetation.

In the west and north there are beech-dominated spruce-fir-beech forests, which only occupy a narrow belt here and are replaced by coniferous forests at a low altitude. Large yew trees have survived in inaccessible places . On dry and rocky surfaces there are stands of snow heather - red pine forests. In the Lainau valley, a canyon forest of common ash , sycamore maple , red beech and mountain elm dominates the vegetation. In the area of round 40 after interruption again walk Zierlersteigs (also Zirlasteig , climbing rise to the difficulty II + UIAA ) there are orchids and the woman shoe .

On the steep lakeshore on the west side, the hair dryer and water create a favorable microclimate with a 19 percent reduction in frost days. Warmth-loving species such as summer linden , woolly snowball , whitebeam and rock pear thrive here .

In the summit area there is a cushioned lawn and a so-called spruce fighting forest with mountain pines .

Among large animals, red deer are common in the forests and chamois up to the summit . Fire salamanders and alpine salamanders find their habitat around the Laudachsee . Crayfish can be found in the Laudachsee and in small streams nearby . The caterpillars of the Apollo butterfly feed on the White Stonecrop ( Sedum album ), often found the right.

In the north-west in the Kaltenbachwildnis there is a pillar made of Wetterstein limestone, which is still called the Eagle's Nest. By 1882 , six osprey nests were known here , which erected nests in the highest tops of umbrella-shaped red pines . However, the kk forest staff regarded the birds as fish robbers and all the nests were thrown down with the young. A few years later the osprey disappeared from the Traunstein. In the meantime, individual specimens are coming back to Upper Austria, so that repopulation seems possible. The adder is also native to this part of the area. 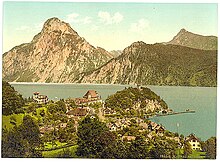 The elevation, formerly called Gmundner Kogel, was given a tinplate flag on August 2, 1837 in honor of Archduke Maximilian d'Este and has been called the Fahnenkogel ever since.

A wooden pyramid was built on the Scharnsteiner Kogel in 1858 for surveying purposes and has been called the Pyramidenkogel ever since. 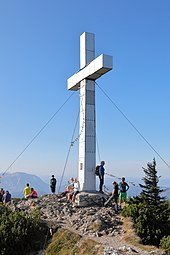 The ten meter high summit cross of those returning from war is located on the Pyramidenkogel and is dedicated to the fallen soldiers of both world wars. In 1950, 520 men and 80 women transported around 4,000 individual parts to the summit in just two days. For the consecration of the cross on August 20, 1950, around 3,000 people gathered on the plateau.

At the beginning of the Mairalmsteig is the so-called Kaisertisch. Emperor Franz Josef used to take a break here when hunting chamois.

In October 1999, Rene Steinpatzer from Gmunden approached the Traunstein in a special way: the endurance athlete ran ten times over the Naturfreundesteig on the plateau ( 1580  m ) and back down over the Mairalmsteig in 23 hours and 58 minutes .

In Seeschloss Ort there has been an exhibition worth seeing on the subject of the “Myth of Traunstein” for several years.

The lower entry of the Hernlersteig

There are three marked and secured paths leading up the mountain, as well as a number of climbs that are only reserved for experienced mountaineers.

The Zierlersteig, which leads over the Kaltenbachwildnis and the Adlerhorst over some easy climbing spots (marked with "Steinmandln" ), on the Zierlerberg and through the Zierlerschlucht (easy to moderately difficult climbing I-II, one difficult entry point (II +); there have already been a number of fatal climbers) leading to the Gmundner Hut. On the last 70 meters of altitude to the Gmundner Hütte, the Zierlersteig joins the normal ascent of the Hernler-Steig. Winter ascents in particular had led to fatal falls in the history of the ascent of the Traunstein.

From the Hohe Scharte, the deepest cut between Katzenstein and Traunstein, the path initially leads steeply through scree and grass slopes up to a small notch where the ridge begins. With a few exceptions, where you turn left (south), the ascent always follows the partially exposed ridge. Shortly before the summit, you cross below the steep mountain slopes on the north side into the “Green Lane”. You climb this up and over a last steep wall upswing you finally reach the summit.

Some of the normal climbs are very steep and secured with wire ropes. The relatively high level of difficulty and the popularity of the mountain, but also overconfidence and poor equipment of some hikers ( half-shoe tourists ) explain the large number of fatal accidents. 131 people have lost their lives on the Traunstein since the census began in 1897 (as of July 6, 2016). That is why there are warning signs on all marked climbs.

There are two huts on the summit plateau, the Gmundner Hut and the Traunsteinhaus .

360 ° panorama from the summit of the Traunstein

360 ° panorama from the Traunkirchner Kogel