State garden shows have been held in the federal states of Baden-Württemberg and Bavaria since 1980. In North Rhine-Westphalia there was a first state horticultural show as early as 1970, other German federal states later adopted the model. In the Austrian federal states of Upper and Lower Austria , state garden shows have also been held every two years for several years. In 1980 the nationwide first cross-border state horticultural show took place in Ulm / Neu-Ulm (Baden-Württemberg / Bavaria).

The state garden shows are intended to improve the quality of life and the ecological climate in the cities. The garden shows often also serve urban and regional development goals . For this reason, garden shows are usually not placed in particularly beautiful landscapes, but rather in areas that are particularly disadvantaged (e.g. due to mining damage), where the garden shows are aimed at promoting structure and helping to achieve urban planning goals. The investments made in the context of the state horticultural shows help the respective district to become more attractive and, as a rule, to remain attractive. In addition, state horticultural shows are now also measures of city ​​marketing , as they can also increase the level of awareness of a city as a major event lasting half a year.

The municipalities, which often implement an LGS with the help of state funds, take a calculated financial risk. While some state garden shows ended with a "black 0" or even with slight profits, others exceeded their budget and had to be subsidized retrospectively. Especially in municipalities with a tight budget, state horticultural shows are sometimes controversial despite their long-term advantages; in some cases there have already been petitions for citizens or referendums .

The last well-attended state horticultural show in Baden-Württemberg before the introduction of the “green projects” in 2001 was the state horticultural show in 1992 in the “gold city” of Pforzheim with a peak of 1.6 million visitors. After that, the number of visitors also fell well below a million at the state level. That is why the state government decided in 1996 to carry out the smaller “green projects” in Baden-Württemberg every two years from 2001 onwards. In 2014 Schwäbisch Gmünd set a new record with around 2 million visitors.

The Free State and the EU funded the Bavarian garden shows with 83 million euros up to and including 2015, almost 23 million visitors were recorded and around 460 hectares of public green spaces have been created over the years. Cities and municipalities can apply to the Society for the Promotion of Bavarian State Horticultural Shows (FÖG) to hold a garden show. The award procedure as well as the type and implementation of state funding has often been criticized. Among other things, the Bavarian Supreme Court of Auditors considered the awarding of the garden shows in Bavaria to be intransparent and recommended that they be placed on a new basis, which was also done.

Logo of the State Garden Show 2013 in Tirschenreuth 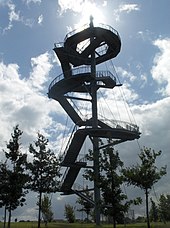 Wismar 2002: observation tower on the site

Mecklenburg-Western Pomerania is the only state that has so far only hosted one state horticultural show. A show was to take place in the Brodaer Höhe landscape park in Neubrandenburg , but it did not go beyond the design phase. Another state horticultural show was originally scheduled for 2014/2015. This was initially suspended because the applicants Güstrow and Putbus were each unable to present a financially sustainable concept.

In 2003 an International Horticultural Exhibition (IGA) was held in Rostock . A successful federal horticultural show followed in Schwerin in 2009 . For 2025, Schwerin was awarded the contract by the BUGA Society for another Federal Garden Show, which will further develop the concept from 2009 and better open up the southern shore of Lake Schwerin for residents and visitors. A referendum on the election date for the 2017 federal election in September should decide on the orientation . After the state government failed to provide funding, the BUGA 2025 was returned to the Deutsche Bundesgartenschau-Gesellschaft mbH (DBG) in 2017. On July 26, 2018, Rostock initiated a BUGA application and was officially awarded the contract to host the Federal Horticultural Show 2025 on September 10, 2018. 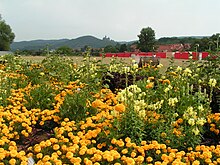 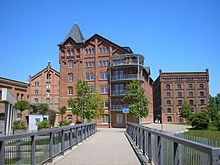 The first Upper Austria. The State Garden Show took place in 1997 in what was then the Schmiding Bird Park in the municipality of Krenglbach .