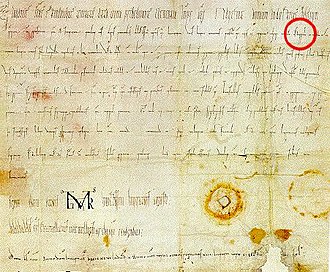 The Ostarrîchi document of Otto III. from the year 996

Ostarrichi , also Ostarrîchi , at the beginning also Marcha orientalis , later Marcha Austriae or Osterland , as Mark Austria or Margraviate Austria , from the 19th century also occasionally referred to as Ostmark , was nominally part of the Duchy of Bavaria from 976 until independence in 1156 as the Duchy of Austria .

The oldest known written mention of the name "Ostarrichi" from which the later name for Austria has arisen stems from November 1, 996 from the in Bruchsal made out Schenkungs- certificate of Holy Roman Emperor Otto III. addressed to the Bishop of Freising Gottschalk von Hagenau , the Ostarrichi document . The certificate is now kept in the Bavarian Main State Archives in Munich . The donation includes areas “in the region popularly called Ostarrichi” ( Latin regione vulgari vocabulo Ostarrichi ), which means the region around Neuhofen an der Ybbs in today's Lower Austria ( in loco Niuuanhova dicto ). Neuhofen itself is probably a royal Fronhof , the donation also includes "thirty surrounding him lying Königshufen with cultivated and uncultivated land, with meadows, pastures, forests, buildings, with sources and water courses, with hunting, bee pastures, fish waters, mills, with movable and immovable property, with roads and impassable land, with exits and entrances, with achieved and yet to be achieved income and with everything that belongs to these hooves according to law and statute ... “Whether the name only refers to this area or a larger one In view of the recent Bavarian conquest in the then border region to the Magyar Empire , not exactly known in the area of ​​the Carolingian Avarmark, which was lost after the defeat of Pressburg in 907 as part of the first Marchia orientalis . A few decades after the turn of the millennium, the margravate Ostarrichi / Marchia orientalis also included other areas above and below the Enns . In 1156 the Austrian march was separated from the Duchy of Baiern, raised to the status of a duchy itself , and thus directly empire and endowed with the privilege minus .

Originally, the name "Ostarrichi" referred to a region in the domain of the Babenberg margraves in the Duchy of Baiern in the southeast of the East Franconian Empire in the 10th century . The exact etymology of the word "Ostarrichi", with which this eastern border region ( Avarmark ) was designated, is unclear.

The name has existed before and meant "eastern dominion", or Eastern Empire for short. Ostarrichi can be found in this meaning, for example, in the Gospel book of Otfrid von Weißenburg from the year 870, with reference to the Frankish Eastern Empire.

In the Ostarrichi document, written in Latin, four non-Latin words are mentioned (Ostarrichi, Niuuanhova, hoba, zidalweidun) , of which the other three are clearly Old Bavarian . This is an indication that the name Ostarrichi is also of Old Bavarian origin. As a vernacular translation, it applies to the Marchia orientalis ("Eastern Mark") used in Latin texts . -rîchi , OHG. rihhi is not here with Reich to translate in the modern sense, but for a directly owned by the ruler of land. In contrast, the core regions in the original Bavarian settlement area west of the Enns were always referred to with the word Gau (ahd. Gewi , Bavarian Gai ) (e.g. Huosigau, Isengau, Künziggau, Attergau, Mattiggau, Traungau, Chiemgau, Sundergau, Pongau) . Obvious is the interpretation as "Land in the East", see Austri , the Germanic-mythological dwarf of the East, and Austrasia , the Eastern Franconia. In 1147 King Conrad III. the Margraves of Austria referred to as "Austrie marchionibus" (dative pl.). This word, used for the first time in the Latin context, is not of Latin origin, but rather from an old Germanic * Austar-, Old High German ôstar- "east, in the east" (the similarity with the Latin auster "south wind" is coincidental, although both words come from the same word root) , as the country name latinized Austria. As an alternative to this, the translation of Marchia orientalis as Osterland or Osterlant ("eastern land" or "land in the east") was also used colloquially until the High Middle Ages . The naming gradually changed to Austria ; in the Privilegium minus it is called Marchia Austrie "Austrian Mark".

In order to initiate a new discussion about the interpretation of the name Ostarrichi, the Salzburg professor of Slavic Studies Otto Kronsteiner suggested a possible Slavic origin. According to this, the word Ostarrichi is said to come from the Slovenian Ostriki in carantan . Based on the Slovenian ostra gora "the steep mountain", "the people from the steep mountain" would be the ostriki , the original name of Strengberg near Amstetten.

There were views that recognized a connection to the hypothetical Germanic goddess Ostara . However, this is highly controversial and rather arose from certain neo-pagan tendencies of some researchers during the time of National Socialism . A reference to the Ister of the Greeks, the lower course of the Danube, was also mentioned, in some cases a possible Celto-Romanic origin is also mentioned. The sources available today are too poor for all of these hypotheses.

The spelling with circumflex (^) above the i is a modern addition to linguistics to mark the accent and length of the sound, and was not written in this way in the original document.

In 1996 Austria celebrated the first documented mention of the name Ostarrichi with the slogan : “A thousand years of Austria”. In 1976 the millennium of Leopold I's installation as Margrave of Austria was celebrated. 950th anniversary celebrations were held as early as 1946, at that time primarily with the aim of strengthening Austrian national awareness.

In 1996, on the occasion of the anniversary, a Saab 35 Draken of the Austrian Armed Forces was painted in red, white and red. The lettering " Ostarrichi 996 " adorned the top of the aircraft. This aircraft was the figurehead for the Republic of Austria at air shows until 2005 .