Wire bridge over the Subersach 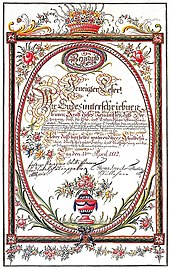 Egg is a market town with 3610 inhabitants (as of January 1, 2020) in the Austrian state of Vorarlberg in the Bregenz district . It is the most populous and with an area of ​​65.37 square kilometers also the largest municipality in the Bregenz Forest .

Egg is located in the westernmost federal state of Austria, Vorarlberg, in the Bregenz district southeast of Lake Constance at an altitude of 561 meters. 37.3% of the area is forested, 31.5% of the area of ​​the Alps . The highest point is the Hohe Ifen with the Schneckenloch Cave, the largest cave in Vorarlberg.

The municipality includes the following two localities (population in brackets as of January 1, 2020):

The community consists of the cadastral community Egg.

In 1275 the village "Anderegge" was first mentioned in a document. The High Court of the Inner Bregenz Forest met here until the end of the “ forest republic ”. The Habsburgs ruled the place alternately from Tyrol and Upper Austria ( Freiburg im Breisgau ).

From 1805 to 1814 the place belonged to Bavaria, then again to Austria. Egg has been part of the Austrian state of Vorarlberg since it was founded in 1861. In the Biedermeier period , an iron-containing sulfur spring in Bad Hub was used against rashes and rheumatism , as well as a healing spring in Hinteregg with carbonated sulfur water for malocclusion.

Egg also became known because the former Gauleiter of Württemberg-Hohenzollern , Wilhelm Murr , took his own life on May 14, 1945, together with his wife, by carrying poison ampoules with him. Both were buried in the Egg cemetery. The place was part of the French occupation zone in Austria from 1945 to 1955.

A momentous fire disaster occurred on February 8, 2008. In this 11 people died in a nursing home "Vinzenzheim" in a building fire by smoke inhalation killed and six more were from the volunteer fire badly injured to be saved. One of the injured died in hospital on February 16 as a result of serious injuries.

In November 2019, the Vorarlberg state government announced that Egg would be the twelfth municipality in Vorarlberg to become a market town on January 1st, 2020 . Egg has been Vorarlberg's twelfth market town since January 1, 2020.

The coat of arms of the market town of Egg was awarded by the Vorarlberg state government on October 10, 1929 and shows a silver shield with a red shield base. A stylized, fertilized, uprooted linden tree appears in the shield field. In the base of the shield, a silver sword, placed diagonally to the right, is intertwined with an equally tinged staff. In the original version, the shield is surrounded by an ornamented dark green border.

The proportion of foreigners at the end of 2002 was 4.3 percent. From 1981 to 2011 there was a slight emigration, but this was more than offset by a strongly positive birth balance.

In 2003 there were 92 commercial enterprises with 994 employees and 41 apprentices on site. There were 1,485 employees subject to wage tax. In March 1912, the Capo company was founded here.

Another important field of employment is tourism - a total of 63,219 overnight stays were booked in the 2001/2002 tourism year.

Opening move of Bregenzerwaldbahn on 21 September 1902 in Egg

In Egg there are three kindergartens as well as two elementary schools , a secondary school and an AHS . There are (as of January 2003) 793 pupils in the village, 202 of them at the AHS.

Cities and municipalities in the Bregenz district