Tannheim is a municipality with 1105 inhabitants (as of January 1, 2020) in the Reutte district in Tyrol ( Austria ).

Tannheim is the main town in the Tannheimer Valley , through which the Vils flows. It forms a clustered village that is surrounded by individual hamlets that have grown into larger settlements through recent settlement expansions.

As a mountain of Tannheim of standing just north applies Einstein .

The municipality consists of a single cadastral municipality or locality of the same name , after the remaining localities were deleted in October 2013 by an ordinance of the Tyrolean state government. Since December 1, 2012, the municipality has new street names.

Four of the six neighboring communities are in the Reutte district, two in Germany.

Originally the Tannheimer Tal belonged to the extensive property with which the Franconian rulers equipped the diocese of Augsburg between 750 and 850 on the occasion of its re-establishment or re-establishment. In 1059, King Heinrich IV gave the Augsburg bishop, among other things, the ban on wildlife in the forest between Lech, Wertach and Iller and the right to colonize, i.e. the right to clearing and laying out settlements. The bishop passed property and rights on to members of the nobility as fiefdoms; around 1300, three quarters of the Tannheimer Tal, still used as an alp, was owned by the Counts of Montfort and a quarter by the Lords of Rettenberg.

Ecclesiastically, the Tannheimer Tal belonged to the Sonthofen parish, with the exception of Jungholz (Wertach parish) .

On September 17th, the inhabitants of the valley celebrate the valley holiday every year. On this day there is a festive service followed by a procession in memory of the well-fortified ancestors who fled the French on September 17, 1796 and thus prevented an impending foreign rule.

Manuel Neuer married in Tannheim in May 2017 .

Blazon : "In silver a green fir tree, two red sticks on the left edge of the shield."

The colors of the municipality flag are green and white.

The coat of arms awarded by the Tyrolean provincial government on May 8, 1984 is symbolized by part of the municipality's name. The fallen shield symbolizes the dukes in Austria as Tyrolean sovereigns who acquired the entire Tannheimer Valley at the turn of the modern age. For this purpose, the valley with the main town Tannheim was raised to the bar and was part of the Ehrenberg court . 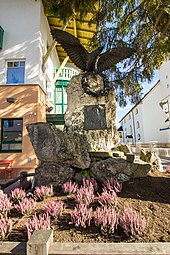 Tannheim has numerous tourist offers such as:

The hotels with the tourist infrastructure and the mountain railway on the Neunerköpfle make Tannheim an important two-season tourist community in the valley.

Cities and municipalities in the Reutte district