The Tannheimer Tal is a high valley about 1100 meters high in the Tannheimer Mountains , part of the Allgäu Alps , in Tyrol ( Reutte district ). It is a side valley on the left of the Lech Valley, around 20 kilometers long with a wide valley floor.

The valley branches off as a hanging valley near Weißenbach from the upper Lech valley to the west, leads over the Gaichtpass and Nesselwängle to a valley watershed at around 1140  m above sea level. A. in front of the Haldensee . The previously mentioned section of the valley drains via Nesselwängler Ache, Warpsbach and Weißenbach in total approximately southeast to the Lech near Weißenbach.

The water of the Haldensee, on the other hand, initially flows westwards in the Berger Ache to Tannheim, which gives the valley its name . There it flows into the Vils, which comes from a narrow valley from the Vilsalpsee in the south . This other valley runoff runs in a large arch around the Tannheimer Berge to the west, initially in a slowly narrowing valley to the west and northwest over Zöblen to Schattwald, which lies at the eastern foot of the Oberjochpass over to Bavaria .

Below the Vilsfall, the continuation of the valley, which now initially runs northwards, becomes the notched upper Vilstal, which crosses the Bavarian border, expands to the Trogtal at Pfronten, and on eastward over the border back to Tyrol at the town of Vils, downstream of the Weißenbach, back into the valley of the Lechs flows.

The high valley is framed by mountain groups and striking mountains:

Municipalities in the Tannheimer Tal are Nesselwängle , Grän , Tannheim , Zöblen and Schattwald . Together they form the Tyrolean Planning Association Tannheimer Tal. This also includes the Jungholz community , a functional enclave in Bavaria. The six municipalities of the planning association have 3150 inhabitants (as of January 1, 2020) and an area of ​​127.2 km², 16.7% of which is permanent settlement.

Typical in the villages in the Tannheimer Tal is the shingled weather side of the houses in the west and the residential wing in the east.

In 1377 Tannheim became its own parish, until then Tannheim belonged to the parish of St. Michael in Sonthofen (Allgäu).

From the 16th to the 19th century, salt was transported on the salt road , a section of which runs through the valley, from Hall in Tirol over the Jochpass to the Lake Constance area. Around 1780 the Salzstraße lost its importance in the course of the expansion of the Arlbergstraße .

On September 17, 1796, French troops were defeated in the Tannheim Valley. Since then, this day has been celebrated annually with a festival service, procession and a subsequent festival. In 1894 the valley was connected to Reutte by telegraph . In 1899 the road between Vilsrain and the state border was expanded, and in 1900 the new Jochstraße was put into operation. In 1907, the Nesselwängle local office was founded as one of the first local mountain rescue offices in Austria. During the First World War , 486 men had to deploy from the entire Tannheimer Valley, of which 118 did not return. In 1918, German troops stopped in the Tannheimer Tal on their way to the southern front. In 1930 the airship Graf Zeppelin overflown the Tannheimer Tal . In 1933, tourism came to an almost complete standstill as a result of the thousand-mark block .

During the Second World War the valley remained relatively undisturbed. SS troops did not occupy the Haldensee area until April 1945. On April 29, American troops opened fire and set Grän on fire. 23 dead, five wounded and 15 houses burned down were the result of the fight. The German troops then withdrew behind the Gaichtpass and blew up the Gemstobel Bridge. On the night of April 30th, the valley from Schattwald to Vilsalpsee was taken under shell fire; and again there were dead and wounded. On May 6th, French combat troops from Hindelang entered the Tannheimer Tal and replaced the Americans. They were withdrawn in 1947 after two years of occupation.

In 1948 the first ski lift went into operation in Jungholz, and in 1950 the reconstruction work in the community of Grän was completed. 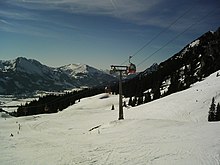 In the winter season there are six, not directly connected, ski areas in Nesselwängle, Grän, Tannheim and the Zöblen / Schattwald ski area. Jungholz has its own ski area. A total of 20 lifts and cable cars with 55 km of groomed slopes are available, plus cross-country trails with a total of 140 km of trails for classic cross-country skiing as well as skating , groomed winter hiking trails and toboggan runs. The valley also offers various winter events such as the Tannheimer Tal international balloon festival or the Tannheimer Tal – Bad Hindelang ski trail . In summer, the Tannheimer Tal is a hiking area with numerous easy, medium and difficult hiking and multi-day tours. Furthermore, the valley and the Tannheimer Berge offer climbing routes and via ferratas as well as a Nordic walking arena, well-developed bike paths, racing bike and mountain bike routes.