Sonthofen from the northwest

Sonthofen from the southwest

Old towns with group of horns

Sonthofen is the district town of the Swabian district of Oberallgäu in Bavaria . It was named Alpine City of the Year 2005.

The urban area of ​​Sonthofen lies in an area of ​​about 750 to 1100 meters above sea level on the northern edge of the Allgäu Alps . The rivers Iller and Ostrach flow through the city . Sonthofen is about 40 kilometers from Lake Constance and 120 kilometers from Munich and the southernmost city in Germany. After the incorporation in 1976, the Grünten borders on the municipality of Sonthofen.

Sonthofen has 19 officially named parts of the municipality (the type of settlement is given in brackets ):

At the foot of the Calvary there was presumably an Alemannic settlement with which the local history began. One suspects an old thing site on the hilltop . A compulsory trial was held here every year from 1120 onwards. Before 1800 Sonthofen was a nursing office and belonged to the Augsburg bishopric . With the Reichsdeputationshauptschluss of 1803, the place came to Bavaria. Sonthofen had market rights with important proprietary rights since 1429. In the course of the administrative reforms in Bavaria , today's municipality was created with the municipal edict of 1818 .

Sonthofen received supraregional importance during the National Socialist era through the stationing of the Wehrmacht and SS units.

The Ordensburg , built in 1935, served the NSDAP as the Adolf Hitler School . After the war it was first used by the US armed forces and taken over by the Bundeswehr in 1956 and renamed Generaloberst-Beck-Kaserne .

Sonthofen was bombed twice during World War II: the first time on February 22, 1945; the cheese warehouse, the hospital church and the cooperative bank were hit. The second attack took place on April 29, 1945; the Catholic parish church of St. Michael was hit.

On January 1, 1976, as part of the regional reform in Bavaria, the previously independent municipality of Altstädten with Hinang, Beilenberg and Hochweiler was incorporated.

The city council has 30 members. After the local elections on March 15, 2020, they will be distributed among the individual parties and electoral communities as follows:

Blazon : split between gold and red; in front side by side three rooted green flax plants with blue flowers, behind two diagonally crossed silver nailing hammers.

The plants symbolize flax cultivation , which was an important source of income for farmers until the 19th century . The forge hammers symbolize the processing of the iron ore mined at nearby Grünten in the Sonthofen steelworks as well as the further processing in numerous nail smithies , which was also an important source of income in Sonthofen until the middle of the 19th century. 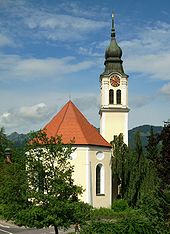 Next to the Kalvarienberg is the ecological spa park on a steep terrain. It houses a wet biotope , native plants and information boards about the flora and fauna.

Another park is in the so-called G'hau an der Iller, there is also a mini golf course and a playground.

Witch mask for the Egga game

The Stadtkapelle Sonthofen e. V. was founded in 1815 and is one of the oldest clubs in Sonthofen. There is also the two-time German youth orchestra master in the form of the Sonthofen youth brass band (JBK), the Altstädten music band with over 50 members and the Berghofen village music band.

The regional radio broadcaster Radio Allgäu Hit is based in the district town. The studio is located on Richard-Wagner-Straße.

The county messenger publishing features in Sonthofen its own local editorial and appears Wednesdays and Saturdays.

The dairy industry and tourism are of supraregional importance. Important employers are also the Bundeswehr and various medium-sized, mainly metal-processing industrial companies:

Until the early 1990s, the textile industry ( Ergee company ) was also important.

The two stops Sonthofen and Altstädten are located on the Immenstadt – Oberstdorf railway line in the municipality .

The following lines stop in Sonthofen:

The station Sonthofen is thus of local trains of the DB Regio and from alex (formerly short for " Allgäu-Express ") of the countries train operated. There are also two pairs of long-distance trains operated by DB Fernverkehr .

Furthermore, since August 2012 a city ​​bus has been running every hour from Monday to Saturday to Rieden, the hospital and the Hotel Allgäu Stern.

Sonthofen is also located on the Iller cycle path , a long-distance connection for cyclists between Ulm and Oberstdorf .

The city of Sonthofen was given a garrison for the first time during the National Socialist era when the Wehrmacht was arming. In 1936 and 1938 two barracks for the mountain troops were completed. They were taken over by the German Armed Forces from the mid-1950s, together with the former Nazi Ordensburg (which was initially occupied by the US Army after the war ) . Today there are three barracks in Sonthofen: the Generaloberst-Beck-Kaserne , the Jäger-Kaserne and the Grünten-Kaserne.

The following well-known or significant people were born in Sonthofen, lived or worked in the city or live or work here or are otherwise connected to Sonthofen:

Important personalities who live or lived in Sonthofen

Students of the Nazi elite boarding school at the Ordensburg

Other persons who are related to Sonthofen

Municipalities in the Oberallgäu district