Altusried is a market with around 10,000 inhabitants in the Bavarian-Swabian district of Oberallgäu . The place is on the Oberschwäbische Barockstraße . 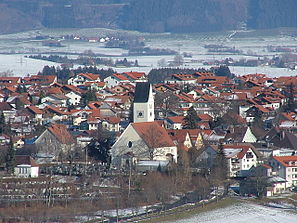 Iller breakthrough from Kalden: the Iller meanders through the moraine landscape in picturesque turns

View of Altusried, in the background the church tower of Reicholzried and the Illertal 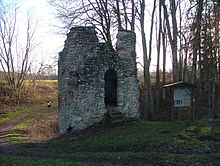 West facade of the Church of Frauenzell

There was only a fine line left from Altkalden.

Altusried is located in the Allgäu region , about 35 km south of Memmingen and 15 km north of Kempten (Allgäu) . It is located between the Iller valley in the north-east and the somewhat distant Hohentanner forest in the south-west. Approx. The Iller meanders 1.5 km to the north.

There are 167 officially named parts of the municipality :

During the ice ages , the Iller glacier stretched from the high mountains to Altusried. The meltwater from the glacier found three drains , from Probstried to the Westgünz valley, from Dietmannsried to the old Illertal (now Memminger Trockenental) and from Kalden (Altusried) to Lautrach -Illerbeuren. At the end of the last ice age, the ice flow melted and a large lake was created between Kempten and Altusried. As a result, the runoff deepened the most at Kalden and the lake ran out. Since then, the Iller has been flowing in many picturesque turns through the terminal moraine from Altusried to Ferthofen and only returns to the old Illertal below Memmingen. The most beautiful way to see the Iller breakthrough is from the ruins of Kalden (former Kalden Castle).

Typical of Altusried are Tobel . These are narrow, mostly wooded gullies that lead steeply down to the Iller. The best known is the Briels Tobel. The entrance is easy to find from the Kalden ruins. Since it is accessed by a path, a romantic walk between the ravine and the steep bank down to the Iller is worthwhile. You will also pass the medieval Altkalden Castle Square. But only a few hewn tuff stones bear witness to it . In the moraine landscape one can occasionally also find ring-shaped depressions, these are so-called dead ice holes .

From around 1000 BC Prehistoric finds of weapons, tools and jewelry come from the Bronze Age in Ottenstall, a hamlet west of Altusried in the Rohrachtal . The place Altusried was probably founded in the 8th century. The namesake was probably a certain Alto. This name was often used in Friesland at that time. At this time, many Saxons and Angles migrated to southern Germania, from which numerous places in the Allgäu with the name components -engen , -ingen and -sachsen may come from. The cause of this small mass migration was not least the Saxon Wars of Charlemagne .

Written records about Altusried have been around since the 12th century, because only since then has the principle that only written contracts are legally valid has increasingly been applied. In 1180 a "Bertholdus de Altungisried" was mentioned. There are two endings in the name Altungisried that are typical for place names in the early Middle Ages, namely ung (= ing ) and ried . They refer to the establishment of the village in two stages: first Alt (?) Ung, further clearings lead to the name Altung (is) ried. In everyday usage it became Altisried, today Altusried. The "Machttildis de Challenden" (Kalden) are mentioned in 1236. In 1353, 60 of 150 apartments remained after the plague. In 1422 the Lords of Rothenstein received the village court over Altusried.

The place name Krugzell has nothing to do with a jug. Jug means circular here, meaning houses arranged in a circle around the cell of a pastor or monk. Frauenzell is mentioned as Hupoldscelle in the document book of the St. Gallen monastery as early as 855 . Later the changed name probably refers to the short-term settlement of a convent or a Marian shrine. Kimratshofen is probably the oldest district and was founded in the middle of the 8th century by a certain Chunibert. The place is mentioned in writing for the first time in 1275 as Kunebrechtishofen in the tithe book ( Liber decimationis ) of the Diocese of Constance . Muthmannshofen is first mentioned in 1166 as Mutwigshofen .

In 1515, Neu-Kalden Castle was built by Joachim zu Pappenheim. In 1525 the "Altusrieder Haufen" was involved in the Peasants' War. In 1545 28 houses were destroyed by arson.

In 1670 the pillars of the parish church collapsed. The church was rebuilt. 1692 was the end of the Pappenheimer feudal rule. The Kempten monastery bought the fief. 1772 was the beginning of desertification .

Before 1800, the Altusried market was the seat of an upper and lower court and belonged to the prince monastery of Kempten . Since the Reichsdeputationshauptschluss and the secularization of 1803 the place belongs to Bavaria. Altusried had market rights with important proprietary rights. In 1803 a fire destroyed 14 houses.

In 1838 the Altusrieder coat of arms (Kalden ruins) was approved by King Ludwig I. In 1877 the first performance of an open-air play “The Bavarian Hiasl” and in 1914 the motor mail line to Kempten was opened.

In 1955 the parish church was renovated.

On July 3, 1972, the municipality Altusried was awarded the title market .

The Roman Catholic Church include 66.4 percent of the population, 10.3 percent are Protestant and 23.3 percent belong to other faiths or none.

In the course of the municipal reform , Frauenzell, Kimratshofen (formerly Altusried II), Krugzell and Muthmannshofen were voluntarily incorporated on January 1, 1972. On January 1, 1974, the Hohentanner Wald area , which was previously free from municipalities, was added.

Coats of arms of the former municipalities

The municipal council for the 2020–2026 electoral period consists of the following parties and groups (sorted by strength ratio):

The description of the coat of arms reads: In blue a castle ruin with silver walls.

The Altusrieder municipal coat of arms had to overcome a number of obstacles before it was approved in 1838. After secularization, the municipal reform in 1818 sought to erase the memory of earlier rulers by banning the use of old coats of arms. In 1835, however, the royal government asked which municipalities would like a coat of arms and which proposals they could make for it. The Altusrieder responded to this request a year later with two drafts for the community emblem. One suggestion showed the popular citizen "Rysch", who is actually to be assigned to Dietmannsried and was therefore not considered suitable.

The second proposal with the “fabulous family castle of the Marshals of Calentin” was therefore favored from the start, although in 1836 only a few of the ruins were actually visible. The stones of the new Calden Castle built by Marshal Hans von Pappenheim in 1515 had been used to build the Kempten hospital on Memminger Strasse. The Reichsherold now also wanted to improve the design and drew towers, kemenate and keep .

Approval was not long in coming. As early as February 3, 1838, the government of the Upper Danube District informed the municipality of Altusried that it had received the right to use the Calden knight's castle as a coat of arms on a blue shield. When the coat of arms arrived, one was amazed. Because there, instead of Calden Castle, the Römerturm Oberschöneck near Babenhausen appeared . The oversight was quickly discovered and in the same year the Altusrieder received their real coat of arms and an official seal , designed by the then court engraver Neuss.

Altusried has had a partnership with the French municipality of Lusignan in the Poitou region since 1976 .

Next to the church, near the cemetery, is the war memorial , which commemorates the 302 soldiers from Altusried who died in the First and Second World Wars.

One of the largest open-air theaters in Germany is located in Altusried. Every three to four years, the Allgäu open-air theater Altusried is performed there with numerous participants from the population. For example, The Gypsy Baron in 2008 , The Maid of Orleans in 2005 , Wilhelm Tell in 2002 and the Peasants' War in the Allgäu in 1999 and Robin Hood in 2016 . The open-air plays can be traced back to 1879 and thus have a tradition of over 125 years.

In 1998 there were 43 in agriculture and forestry, 657 in manufacturing and 265 in trade and transport at the place of work. In other economic sectors, 358 people were employed at the place of work subject to social security contributions. There were a total of 3,096 employees at the place of residence subject to social security contributions. In the manufacturing industry (as well as mining and quarrying of stones and earth) there were two, in the construction industry twelve companies. In addition, in 1999 there were 308 farms with an agriculturally used area of ​​6,356 ha. Of this, 13 ha were arable land and 6,340 ha were permanent green space.

The state road St 2009 crosses the place. In town, the OA 15 district road branches off towards the south.

Altusried is also located on the Iller cycle path , a long-distance connection for cyclists between Ulm and Oberstdorf .

In 2018/19 there were the following institutions:

Municipalities in the Oberallgäu district

Officially named parts of the municipality of the Altusried market