Volker Klüpfel and Michael Kobr at the Leipzig Book Fair 2013 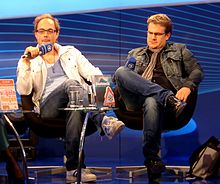 Commissioner Kluftinger is the main character in a crime novel series by the German writers Michael Kobr and Volker Klüpfel , also known as the Allgäu crime novels.

Up to the sixth case, the books have been published by Piper Verlag in Munich . In October 2011, the author duo - following its editor Michaela Kenklies - switched to the Droemer Knaur publishing house . The tenth volume of Kluftinger was published in April 2018 by Ullstein Verlag.

Some of the novels were also published in abbreviated form as audio books , read by the authors themselves.

The title hero Adalbert Ignatius Kluftinger (the secret of his first name is revealed in volume 10 Kluftinger ) lives in Altusried in the Allgäu. He is the chief detective chief superintendent of the police in Kempten (Allgäu) . Kluftinger is happily married to Erika and has a son with her named Markus who is studying psychology and who wants to work as a profiler later. Markus' girlfriend or wife Yumiko, called Miki, comes from Japan, but studies like Kluftinger junior in Erlangen and speaks German without an accent.

Kluftinger doesn't like corpses, he suffers from a fear of flying, struggles with foreign languages, has neither fashion accessories nor technical innovations, drives an ancient VW Passat Diesel and loves hearty dishes like Kässpatzen . He plays the big drum in the local music club because there is no one else who would be willing to take on this instrument.

Kluftinger's intimate enemy is the doctor Dr. Martin Langhammer, who unfortunately also lives in Altusried. His wife Annegret smugly is close friends with Erika, Kluftinger's wife. For the embarrassment that Langhammer regularly inflicts on him, Kluftinger takes revenge partly only in thought, partly with actual acts of revenge.

At Kluftinger's side, his colleagues Strobl, Maier and Hefele are investigating. In contrast to his superior, Maier is particularly interested in media technology and regularly gets on his colleagues' nerves. Kluftinger prefers to work with the identification officer Willi Renn, even if he is dreading his collection of macabre mementos of closed cases. The secretary Sandy Henske from Dresden is also part of his professional environment. Kluftinger's superior Dietmar Lodenbacher also appears regularly in the Allgäu crime novels. Later he was promoted to Ministerialrat and his successor in office was Birte Dombrowski. Other police officers with whom Kluftinger often deals are the Austrian Valentin Bydlinski and the Füssen police officer Friedel Marx.

Although Kluftinger tends to act clumsily in everyday life, regularly fools and is still mothered not only by his wife, but also by his elderly parents, thanks to his keen eye, his sometimes photographic memory and his ability to combine things, he regularly manages to resolve the case to deal with.

A reference to the first name of Kluftinger is given in the fourth volume of amateur play . Kluftinger reveals that his middle name translated means "the fiery one" ( Latin Ignatius ). In the following volume, Rauhnacht , the reader also learns that a name of the commissioner consists of eight letters. In addition, in the third volume, Seegrund , the reader learns that his full name can be abbreviated with the initials A. I. K. In this novel, too, there are two references to the fact that his first name could be Alfons, because it describes how he shudders when reading two letters addressed to an Alfons. In the novel Grimmbart it turns out that the first name begins with "Ad", which means with 8 letters z. B. Adolphus, Adrianus or Adalbert could be. In the Himmelhorn case, his old friend Korbinian Frey gives him the nickname Bertele, which could point to Adalbert. In the current and 10th volume, Kluftinger , the secret is revealed and his first name is Adalbert Ignatius.

A food chemist from the local dairy plant is murdered in Inspector Kluftinger's hometown of Altusried. With his idiosyncratic investigation methods, Kluftinger discovers an apparently barred treason, criminal machinations and a tangible scandal behind the Allgäu “ideal world”.

In a forest near Kempten (Allgäu) a corpse is found with a dead crow draped on its chest. During the investigation, Kluftinger delves deep into the mystical past of the Allgäu and encounters other puzzling clues. In his private life, Kluftinger is in despair, because he and his wife visit the unloved doctor Dr. Langhammer is quartered.

The Allgäu legend of the knight Kuno von Rappenscheuchen plays a central role , as the first corpse was found at the site of his former castle, as well as the legend of the twelve boys, according to which the second victim was punished, and the legend of the Dengelstein , which was Forest between Betzigau and Görisried lies.

On Alatsee in a lifeless feet diver is found on the shore. Kluftinger reveals his connection to a group of former soldiers who had to sink at least two mysterious boxes into the lake towards the end of the Second World War and who vowed to find the treasure later.

In Kluftinger's area of ​​operations, an unknown man shot himself while fleeing from the Austrian police. He was suspected of planning a terrorist attack in an as yet unknown location. Kluftinger has to work with his colleagues from Austria and the specialists from the BKA. Privately, he is supposed to take part in a dance class with the Langhammer couple and his wife Erika, although he has no time at all because of the dress rehearsals for the open-air production of “Wilhelm Tell”. At the last second, the police succeed in preventing two attacks, one of them in Altusried.

In September 2009 the fifth Kluftinger volume Rauhnacht was released . In a snow-covered luxury hotel, Kluftinger has to solve a murder case in the tradition of Agatha Christie's Hercule Poirot during the Rauhnächte . He receives support from his unloved neighbor Dr. Long hammer. With the start of sales, “Rauhnacht” entered the Spiegel bestseller lists at number 1. On October 8, 2010, the book was premiered as a play in the Memminger Stadttheater by the Schwaben State Theater.

The sixth Kluftinger case with the title Patron Saint appeared in June 2011 . After a worldwide exhibition tour, the valuable castle treasure is returning to Altusried with the relic of Saint Magnus . Kluftinger is responsible for the safety of the exhibits. In addition, the murder of an old woman must be investigated, and his car also appears to have been stolen, which he, ashamed, tries to hide from his wife and colleagues.

In February 2013, Kluftinger's seventh case, Herzblut, was published . In it, the inspector receives an anonymous phone call believing he has witnessed a murder and struggling with frightening health problems.

Kluftinger's eighth case, Grimmbart , appeared in September 2014 . The baron's wife is found murdered in the castle of Bad Grönenbach , and Kluftinger's son marries his girlfriend Yumiko. The fact that their parents are traveling from Japan to the wedding creates additional excitement.

The ninth Kluftinger thriller was published at the end of September 2016. On a joint excursion with Dr. Langhammer on the Himmelhorn near Oberstdorf , the two come across three corpses of apparently unfortunate mountaineers. At first it all looks like a tragic sports accident.

The tenth volume in the series was published in April 2018. Inspector Kluftinger is enjoying his new life as a grandpa until a freshly heaped grave with his name is discovered in the cemetery. Another death threat takes him deep into his past.

By 2009 the first four books had a circulation of 1.3 million. By 2011, the first five books had sold 2.6 million times. In the reports before the publication of the 7th Kluftinger volume, total sales of all volumes of more than 4.5 million copies were named.

“In his knee breeches, Inspector Kluftinger definitely has what it takes to be Columbo von Altusried. And that's why this thriller should also become known beyond the borders of the Allgäu. "

“Exciting, with a sharp, humorous look at reality. The two authors from Allgäu tell with humor, intelligence and emotional power. "

“In a crime thriller, of course, you can't just laugh, it also has to be exciting and a bit scary. All this is available from Klüpfel and Kobr [...] Seegrund offers everything that readers like about Kluftinger and has a lot of surprises and secrets ready. "

So far (as of January 2020) five Kluftinger novels have been produced for Bayerischer Rundfunk as part of the Heimatkrimi series , each with Herbert Knaup in the title role. The first film version of Thanksgiving still has the addition of an Allgäu crime thriller , while all other episodes are marked with the addition of a Kluftinger crime thriller . The novels were filmed in non-chronological order.

Thanksgiving. An Allgäu thriller was first broadcast on Bavarian television onSeptember 26, 2009. Volker Klüpfel, one of the two authors of the novel series, appeared in the film as forensic doctor Böhm. The final scene was notshoton Dengelstein near Kempten (Allgäu), as in thenovel, but in the Teufelsküche near Obergünzburg. In the film the place is referred to as Dengelfelsen .

In 2010 there were reports that the Kluftingerkrimis should be filmed from 2012 as part of the Tatort series . Specifically, it was about the Kluftinger cases Milchgeld and Seegrund , whose scripts were still in development at the time. This decision was rejected again in June 2011.

Instead, Das Erste broadcast the Kluftinger thriller as an independent film series. The film version of milk money. A rifting thriller reached 4.44 million viewers when it was first broadcast on April 26, 2012. On November 28, 2013 Das Erste showed the third film adaptation of Seegrund. A rifting thriller . The police scenes in front of and in the former Memmingen LEW building (Schweizerberg 17) were filmed in milk money , which was then torn down and replaced by a new hotel.

On November 24th and December 1st, 2016, the film adaptations became Herzblut. A riot thriller and patron saint. A rifting thriller broadcast in Das Erste . The shooting took place from October to December 2015 in Memmingen and the surrounding area. The former secondary school on Buxacher Straße served as police headquarters.

In October 2010, the Schwaben State Theater in Memmingen brought the Kluftinger Rauhnacht case to the stage.

In 2020 the radio play Weather Lights was published by Audiobook Hamburg . In addition to the two authors Michael Kobr and Volker Klüpfel, Thomas Loibl , Laura Maire and Stefan Wilkening , among others , are involved in the production. The radio play is based on the play of the same name written in 2015. The production sites were the sacristy, nave and bell tower of St. Sylvester's Church in Munich.

Every 14 days the city ​​of Füssen offers a "Klufti tour" to the Alatsee, which plays an important role in Seegrund . There are also "rift tours" in Kempten (Allgäu) and Altusried. In 2010 the first geocaching case appeared with the title Unter Brüdern and with the permission of the authors Kobr and Klüpfel .