Werner Lamberz was the son of the KPD political leader Peter Lamberz . From 1939 to 1943 he was a member of the German Young People and until 1945 of the Hitler Youth . A childhood friend of Lamberz was the actor Mario Adorf , who also grew up in Mayen . From 1941 to 1944 Lamberz was a pupil of the Adolf Hitler School in Sonthofen . Local party leaders and relatives who were not close to the KPD had advised the wife of the “ enemy of the people Lamberz”, who deserted and went to Moscow, to take this step in order to protect herself and her two children Werner and Liane from persecution . 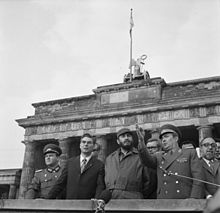 After the war the family went to the Soviet occupation zone . From 1945 to 1948 Lamberz completed an apprenticeship as a heating engineer and fitter in Mayen and Luckenwalde . In 1947 he joined the Free German Youth (FDJ) and the SED and was FDJ and SED functionary for the Luckenwalde district and 1949–1952 for the state of Brandenburg .

In 1950 he studied in the state party school at Gut Schmerwitz and 1952–1953 at the Komsomol University in Moscow . After that he was a member and secretary of the Central Council of the FDJ until 1963 , first for agitation and propaganda , then for cultural work and - after a stay from 1955–1959 as a representative of the Central Council of the FDJ in the Executive Committee of the World Federation of Democratic Youth in Budapest - for international connections. Western work and student affairs.

As head of the agitation department, it was Lamberz's task to swear the GDR press to the political line of the SED. For this purpose, the editors-in-chief of the GDR press had to come to the SED party headquarters for “argumentation meetings” every week. In some cases, the wording of headings and individual formulations was given at these meetings. Lamberz was seen as a bearer of hope and a possible successor to Honecker.

Lamberz was awarded the Patriotic Order of Merit in bronze in 1964 and later in gold, and in 1968 with the Order of Labor Banner .

Lamberz visited Libya in March 1978 as part of a trip to Africa . The background to this was negotiations with the Libyan government on the granting of loans and an agreement that provided for Libya to finance technology exports from the GDR to third countries. He also negotiated with Muammar al-Gaddafi in a tent camp . With Lamberz's death, the agreements were never implemented consistently.

On the way back from the camp at Wadi Suf al-Jin (Wādī Sawfajjīn), about 45 km south of Bani Walid , after Tripoli who fell helicopter type SA 321 Super Frelon with the delegation on board after Libyan information immediately after the start into a tailspin and crashed down. No inmate survived. The cause was probably a defect in the rotor. According to the Libyan authorities, it was an accident. However, they did not allow any representatives of the GDR to come to the site of the accident for investigation.

Immediately after Lamberz's death became known, there were already speculations as to whether the accident could have been an assassination attempt with the intention of eliminating Lamberz or Gaddafi. The latter usually used the helicopter. Because of his comparatively young age for a ZK member, his eloquence, multilingualism, cosmopolitanism and openness (especially towards the cultural workers in the GDR), Lamberz was admired on the one hand and viewed from a distance on the other. Before his death, it was regularly speculated that the leadership of the GDR would change under his aegis, which provoked these different reactions.

The German victims of the helicopter crash were autopsied in the Berlin Charité . Among them should also be the body of Lamberz, whose remains, however, according to the forensic doctor Wolfgang Keil, could not be found. During this autopsy , however, no indications of a possible attack - such as bomb fragments - were found. Despite the alleged missing corpse, there was a state funeral , and Lamberz's urn was buried in the Socialist memorial at the Friedrichsfelde central cemetery in Berlin-Lichtenberg .

His son Ulrich Lamberz (1952-2019) worked for the Left Party in the European Parliament .