The central cemetery Friedrichsfelde in the Berlin district of Lichtenberg in the district of the same name is one of the most famous cemeteries in Berlin. As the burial place of numerous social democratic , socialist and communist politicians and activists, it was nicknamed the socialist cemetery even before the First World War . The memorial to the socialists was later built on its site . The entire cemetery is a listed building .

History of the cemetery

On April 28, 1880, on the initiative of the city council Ernst Friedel , the city of Berlin acquired from Carl von Treskow , the owner of the manor Friedrichsfelde, a 1000 x 250 meter area in front of the then eastern borders of Berlin in the municipality of Friedrichsfelde , around the Berlin municipal cemetery Friedrichsfelde to be able to set up. The purchase price was 46,000  marks . The Berlin city garden director Hermann Mächtig was commissioned with the design of the new cemetery . Based on the model of the Ohlsdorf cemetery in Hamburg , he designed a large, park-like burial site, which was realized under the direction of the garden architect Axel Fintelmann .

The facility, now known as the Central Friedhof Friedrichsfelde , was officially opened in 1881. For the first time in Berlin, the burial of the poor was also possible here because the city took over the burial costs. These burials were discontinued in 1911, as many wealthy Berliners now also chose the cemetery as a burial site due to its attractive design.

In the first years of its existence, the number of burials in the cemetery increased sharply. The city administration therefore had a siding from the Prussian Eastern Railway installed here in 1895 , because the way was very difficult for the funeral home as well as for the mourners.

The first urn burial in the cemetery took place on September 22, 1887. Since the cremation of the dead in Prussia was not permitted under the applicable laws, the corpses had to be cremated in crematoria outside the country - however, the burial of the ashes in Prussia was legal. The Roman Catholic Church and the Protestant regional church in Prussia offered considerable resistance to legal liberalization . Founded in 1874 association for cremation was on an artificial hill in the park, a 1,891 columbarium building could be preserved with dignity in the polls. It was not until 1911 that Prussia, the penultimate German state (before Bavaria), was subject to a corresponding change in the law, after which the communal crematorium Berlin-Wedding was put into operation in 1912.

In August 1900, the Friedrichsfelde Central Cemetery became known throughout Germany when the SPD founder Wilhelm Liebknecht was buried here. At his funeral, around 150,000 people moved from Charlottenburg to Friedrichsfelde. The tomb for Wilhelm Liebknecht had his party designed as a portrait bust by Heinrich Julius May . It was inaugurated in 1901; implemented there with the establishment of the socialist area in 1950. Because Hugo Haase , Paul Singer , Ignaz Auer , Emma Ihr and other Social Democrats were later buried there, the cemetery was soon nicknamed the Socialist Cemetery . The burial place of most of these people, which was set up directly at the main entrance, was located on a slight hill, which political supporters colloquially called Feldherrnhügel .

After the cemetery had lost its reputation as a burial place for the poor, the hereditary burial of the Bleichröder banking family was built in the front part in 1913 . It was an architecturally designed mausoleum complex that was removed in 1950 because it was close to the socialist area .

Burial of the victims of the revolution in 1919

During and especially at the end of the First World War , numerous Berlin residents died of starvation and exhaustion, and wounded soldiers also succumbed to their injuries. About 150 dead soldiers and numerous civilians found their final resting place between 1916 and 1919 in the Central Friedhof Friedrichsfelde . A war memorial was not donated. 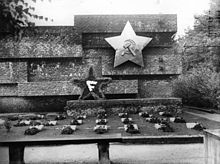 On January 25, 1919, the 33 victims of the Spartacus uprising (January 5–12, 1919), including the murdered Karl Liebknecht , were buried in a mass grave in this cemetery. Karl Liebknecht was a son of Wilhelm Liebknecht . Later that year, other now identified dead revolutionaries followed, including Rosa Luxemburg . To commemorate the dead from the workers' movement buried in the cemetery , an appropriate memorial was to be erected, which was finally realized in spring 1926 based on a design by Ludwig Mies van der Rohe and unveiled on June 13, 1926 under the name of the Revolutionary Monument .

Until 1933, annual parades and commemorative ceremonies in honor of Lenin, Liebknecht and Luxemburg (so-called 'LLL weeks') took place in the cemetery at the Revolution Monument. In February 1933 the memorial was badly damaged by the National Socialists , at the beginning of 1935 it was finally dismantled to its foundations and the surrounding graves leveled. After the end of the Second World War , the destroyed facility was not restored.

The city of Berlin bought seven hectares of land for the cemetery in 1947 and was thus able to guarantee a significant expansion of the burial facilities while maintaining the park character.

Memorial of the Socialists from 1951

In September 1949, instead of restoring the revolutionary monument that had been demolished in 1935 , the Berlin magistrate commissioned the construction of a new joint memorial for social democrats and communists, which was to be laid out in the front part of the cemetery. The construction work, including the relocation of the coffins, began in 1950, and on January 14, 1951, the new facility was inaugurated under the name of the Socialist Memorial in the presence of leading GDR politicians . Until the end of the GDR , this complex, together with the adjoining Pergolenweg cemetery, served as a cemetery of honor for people who, according to the SED , had rendered outstanding services to the ' socialist idea '. Since then, demonstrations to the cemetery have been held annually on the second Sunday in January to commemorate Rosa Luxemburg and Karl Liebknecht. New graves have not been allocated since autumn 1989. 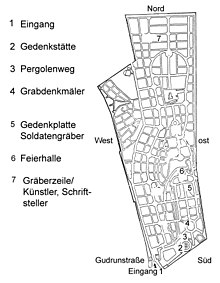 In the north-western area there is a little-known burial complex , the urn garden . Numerous cremated dead were buried in urns on a semicircular area. 14 grave plaques are embedded in the surrounding wall. At the lowest point of this cave garden, the municipal cemetery administration had a fountain designed: A limestone sculpture ( Die Knieende ) was placed on the rondel of the fountain basin. Several benches were set up around the pool. In the meantime (as of spring 2017) the head of the sculpture is missing, there is no more water in the fountain basin, and only the concrete supports of the benches remain.

Several ornamental fountains and sculptures have been set up over the decades to match the decoration and the park character of the cemetery . The figures have largely been preserved, but the fountains are no longer in use. The metal entrance gate in Gudrunstraße / Rüdigerstraße was built around 1950 after the original lattice gate designed by Ludwig Hoffmann was demolished in 1950. Most of the preserved gate comes from Fritz Kühn's workshop , as does the neighboring fence and gate to the socialist cemetery. In 2016/2017, the responsible district office had the 55-meter-long gate system in the Kathmann Metallbau workshop in Berlin-Neukölln completely restored on the initiative of the Memorial Site of the German Workers' Movement Berlin-Friedrichsfelde . The work cost around 230,000 euros , which comes from the Federal Monument Protection Program VI (70,000 euros), the State Monuments Office (80,000 euros) and the district budget (80,000 euros). It was inaugurated again on November 6, 2017 in a small ceremony.

The celebration hall was built in the year 1891-1893 according to plans by Hermann Blankenstein as a cemetery chapel on Mittelweg. The chapel later served as a morgue , and in the 1950s it was completely renovated to give it its current appearance.

Since a regional reform in 2001, the central cemetery no longer belongs to the Friedrichsfelde district , but to the Lichtenberg district. However, the name of the facility was not officially changed.

Memorial to the victims of the 1951 shipwreck

Memorial of the Socialists with Pergolenweg graves

→ Main article : Memorial of the Socialists

To the north-west of the cemetery is the memorial for the victims of the shipwreck in Treptow harbor in 1951, in which numerous children were killed.

Graves for the victims and persecuted of the Nazi regime

This urn grave complex (also called VdN-Ehrenhain ) was set up on an area bought in 1947 to the Friedrichsfelde Central Cemetery and inaugurated on January 29, 1978. The basis for this was a resolution of the Berlin magistrate from 1975, whereupon groves of honor for those persecuted by the Nazi regime, revolutionaries and deserving personalities were set up in five East Berlin cemeteries. The aim was to create a dignified burial place for the survivors of the resistance against National Socialism .

The shape and material of the tombstones ( granite ) and the restriction of the inscriptions to the year of birth and death of the dead were fixed. The beginning of the cemetery is marked by a brick stele bearing the red triangle of the political concentration camp inmates . With this urn complex, the Friedrichsfelde Central Cemetery has become the largest burial place in Berlin for persecuted people and resistance fighters.

Among those buried here are:

The artist department extends on the eastern side of the cemetery not far from the celebration hall. Here are the graves of numerous people of cultural life, to whom an honorary grave was dedicated, including numerous members of the Academy of Arts of the GDR . Among those buried here are:

Other personalities buried in the central cemetery (selection)

Another grave of honor