The title of this article is ambiguous. For the rock band of the same name, see Die Seilschaft .

The term rope team originally comes from mountain sports, in particular climbing, and describes a group of people connected by a mountain or climbing rope and thus secured against falling. In politics and business, the term is also used in a figurative sense for informal groups of people who mutually support their professional or other advancement, there mostly with a negative connotation.

Rope team on the summit ridge of the Großvenediger ; with hard-frozen snow there can be an increased risk of being carried away on the ridge flanks from a slope of 30 ° 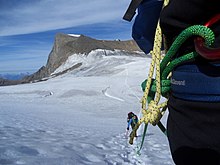 Rope team on the ascent to the Klockerin ; In the foreground on the right the rope knot attached to the harness by means of a carabiner, several braking knots can be seen in the safety rope to the next person

With the common safety rope, a rope team offers its members mutual protection against falling. A rope team also forms a community of danger ; because under unfavorable conditions a fall of a single member can lead to a fall of the entire rope team.

When climbing glaciers and in lighter terrain, the other members of the rope team are only responsible for securing long stretches without using a fixed point . For this so-called “walking on the rope”, all people tie themselves into the safety rope at the same distance; in rope teams with fewer than five people, a certain amount of remaining rope should remain free at the beginning and end. In the event of a crevasse fall, the remaining free rope enables a loose pulley or pulley system to be set up in order to be able to rescue the fallen victim. With larger rope teams of around four people or more, the easiest way to rescue a fallen victim is by means of a team train . A fall of a person - for example into a crevasse  - must be held by the rope team members while walking on the rope. Therefore, there is a risk that a fall could sweep the entire rope team away. Even on moderately steep firn or ice slopes or on corresponding ridges , an anchor point must be used as far as possible and sensible, or the members of the rope team must go free of ropes in order to prevent the risk of being dragged along.

When climbing or in steeper terrain that is at risk of falling, additional fixed points in the rock or ice are used. You can walk at the same time - on the "sliding rope" - or be secured using a stand . A distinction is made between teams of two, three and four people:

Roped parties with more than 4 people are not uncommon for glacier hikes and simple alpine tours .

The tendency is that the more members a rope team has, the slower it progresses. The reason for this is the increasing amount of time required to coordinate and, if necessary, secure the rope team members with the number of people. If the rope team members differ in their ability to perform, the person with the lowest level of ability has a limiting effect on the entire rope team.

In a figurative sense, a group of “connected” people is called a “rope team”, usually with a derogatory connotation. They support each other and often independently of performance e.g. B. in their career (in politics - such as the so-called Andean Pact in the CDU, the so-called Zugspitzkreis in the CSU - and business ). The network of relationships of the others, for example the political opponent, which are not connected by open membership but rather by hidden relationships, is preferably referred to as a rope team.

The own connections for the purpose of obtaining personal advantages are often called network , the people involved are called networkers and the activity is networking or networking . On the other hand, there is an essential distinction: rope teams stand for mutual support, regardless of the best possible suitability for a task, while networks aim at the latter.

Historically, for example, after the collapse of political systems - such as the monarchy in 1918, National Socialism in 1945, fascism in Italy, Spain and Portugal, communism in Eastern Europe or the countless dictatorships all over the world - again and again for the well-being of former members of these networks under the changed conditions.