Alpinist next to crevasse

Crevasses of the Glacier du Géant in the Mont-Blanc group

A crevasse is a slit-like opening in the glacier surface , which for alpine climbers can be an alpine danger, especially when snow cover when it is not visible. In contrast, crevasses are usually only visible on open glaciers that no longer have any snow cover due to the season.

Crevasses occur when the steady flow of the ice is disturbed. Reasons for this can be:

Mountain Glacier in British Columbia . In the center of the picture and in the lower area there are longitudinal columns, at the upper edge of the picture transverse columns.

Cross crevices (across the direction of flow) occur where there is a kink in the rock and the glacier suddenly becomes faster on the steeper slope. The brittle top layer cannot compensate for the tension and tears open.

Longitudinal gaps - also known as radial gaps - correspond to the expansion of the space available to the glacier. Edge crevices (not to be confused with edge chasms and bergschrund ) usually run diagonally upwards towards the center of the glacier and form primarily in the zones where speed differences occur across the ice - for example at the glacier edges, which advance more slowly than the central section. Sometimes a real grating of the crevices can arise if the fractures run not only across the glacier but also parallel to its direction of flow. This phenomenon is most pronounced in the so-called glacier breaks. These are caused by the intersection of various crevasses, which arise due to a steep bend in the terrain and break the ice up into huge blocks, so-called séracs .

Crevasses as an alpine danger 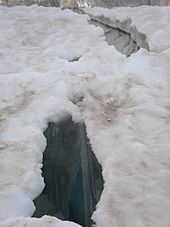 Crevasse with snow bridge in the Vallée Blanche

If the glacier is aper , i.e. free of snow and the glacier ice is visible, there is usually no danger, as the crevices are exposed and the visible crevice edges are normally resilient. You can therefore easily try to skip or bypass such columns. The crevices that are superficially covered with snow are dangerous. This applies to both old and new snow. If old snow is above the crevice, the risk is essentially related to the daytime temperature and thus the strength of the snow. In the afternoon, the risk of falling crevices is therefore usually much greater than in the morning. Fresh snow, on the other hand, is unstable and therefore dangerous regardless of its temperature. If the snow has fallen in the wind, even small amounts of snow may have already blown smaller crevices. The crevice, which is completely covered by snow, can only rarely be recognized by the fact that the glacier is slightly deepened here. Only after fresh snow falls, snow cover occasionally sinks in like a dent over crevices. Old snow packs often only imperceptibly deepen over crevasses for weeks, as mostly only their top 10-20 cm soften in the midday sun, while the old snow below mostly remains stable. But the danger does not only come from invisible crevices. It also exists where the crevice is recognizable as such, but not its full extent. If the edge of the crevice is covered with snow, it is often not possible to tell whether the snow cover is flush with the crevice in the ice, or whether it hangs over the crevice and the crevice is actually much wider than the narrow slit in the snow shows. The same danger exists with regard to the length of the column. If the visible crack in the snow extends over 50 m, the crack in the ice under the snow cover can easily be twice as long. The climber can break in here if he thinks he is going around the crevice. The best protection against crevasse falls is provided by general precautionary measures, in particular creating the trail through the depressions of the glacier instead of over its bulges, since this is where crevasses are most likely to tear, and also a return to the snow-free area before noon. If a crevasse has to be crossed at noon or after fresh snow, the only thing left to do is to probe it by piercing the ice ax shaft into the snow. However, the length of the pimple is usually not sufficient to be sure of the stability of the snowpack. With snowshoes and even more so with skis , the risk of breaking in is significantly lower due to the increased load distribution compared to the simple shoe - but especially with fresh snow - by no means eliminated.

Inspection of glaciers and crevasses

Falling into a crevice can be fatal depending on the shape and depth of the crevice. It is almost as unfortunate when the crevice tapers downwards in a V-shape and the falling person gets stuck at the bottom due to his fall energy. In this case, there is a risk of freezing due to the lack of mobility and direct contact with the egg. Often, however, the fall ends in accumulations of snow hanging in the crevice or structures made of icicles, on which the person who has fallen can in the best case remain unharmed or even try to climb out of the crevice. On the other hand, it is illusory to want to call someone else's help with a mobile phone because of the almost always insufficient signal strength .