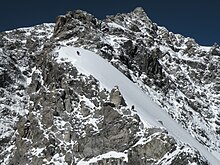 Combined terrain on the Ortler Hintergrat, a classic alpine tour

An alpine tour is a mountain tour that moves in the altitude level of year-round ice cover, the nival zone . High alpine tours require special preparation and equipment.

The term “ alpine tour” comes primarily from the Alpine region , where many mountains are at least partially glaciated from an altitude of around 3000  m . Important historical cornerstones in the development of mountaineering in the Alps were the first ascent of the Ankogel ( 3262  m ) in 1762, the Mont Blanc ( 4810  m ) in 1786, the Großglockner ( 3798  m ) 1800 or the Ortler ( 3905  m ) 1804 as well the development of many high peaks in the western Alps during the golden age of alpinism around the middle of the 19th century. In other areas of the world, the term can be misleading: in many areas outside the Alps, for example in the polar regions , significantly lower mountains are already glaciated. On the other hand, the peaks of significantly higher mountains in the tropics are not always in the nival zone. Therefore, climbing them cannot automatically be called alpine tours, even if they share some of the special features of high-altitude tours, such as the requirement for a certain altitude acclimatization . Mountaineering activities in which altitude adaptation plays a particularly important role, especially those from around 7000  m, are no longer referred to as high-altitude tours, but fall under the term high-altitude mountaineering .

The beginning of mountaineering at the end of the 18th century: contemporary depiction by Horace-Bénédict de Saussure on Mont Blanc , 1787

In the glaciated terrain, due to the danger of falling into crevasses, even technically simple hikes require the use of rope , crampons and ice ax as well as knowledge of safety and rescue techniques . Techniques and devices, the use of which can be particularly important during high-speed tours, are, for example, crevasse rescue , the T-anchor , the ice screw or the firn anchor . Walking on a rope requires the formation of a rope team and makes going it alone dangerous. A certain basic level of fitness and height adjustment is also often unavoidable. Especially for mountain tours in high mountains such as the Himalayas , the Karakoram or the Andes , where heights of over 6000 m above sea level are reached, 1–2 weeks should be allowed for acclimatization. Low temperatures can also be an important factor.

Classic high-altitude tours, on the other hand, require, in addition to surefootedness and a head for heights, the mastery of major technical difficulties in rock and ice climbing as well as mixed climbing in combined terrain of rock and ice.

The dangers and problems of high-altitude tours result less from the pure technical climbing difficulty than they do with sport climbing ; they also depend to a greater extent on the (often rapidly changing) external conditions. The presentation of the requirements of a tour with the help of difficulty scales is therefore more difficult. Such scales therefore try to a greater extent to take into account the seriousness of a route or the physical requirements. An example of an established rating system for high-altitude tours is the SAC mountain and high-altitude tour scale .

Orientation skills and meteorology can therefore also be important when going at full speed. When it snows, knowledge of avalanche knowledge is also necessary in the summer months . The high alpine terrain is subject to a particularly high degree of changes due to glacier retreat and climate change , both the difficulty and the dangers of high-altitude tours can increase as well as decrease.