Getting on with touring skis

Under Ski mountaineering or ski touring is the process of climbing mountains and pastures on skis and the subsequent descent away from prepared slopes .

The first ski tours were taken at the end of the 19th century. At that time there were no ski lifts .

Ski carrying passage on the Silvrettahorn

Tourers also use equipment from classic mountaineering (such as ice ax etc.).

Ski boots (ski boots) in lightweight construction with joints and tread soles make walking easier, even on steep or rocky terrain, because the skis sometimes have to be carried. The binding must be adapted to the increased friction. Such shoes are only suitable for touring bindings. Normal ski bindings do not offer any safety with these shoes (lack of controlled release values).

The skis should have ski stoppers . Safety straps prevent the skis from disappearing in deep snow or sliding down the slope in the event of a fall, but they imply a risk of injury on fast descents. In the event of an avalanche, they can make it more difficult to loosen the skis and thus prevent the avalanche victim from "swimming" on the surface of the snow masses.

Ski tourers on the ascent

Avalanches are the greatest danger for ski tourists. If there is an increased avalanche danger (already from level 2 "moderate" in the official avalanche report from the avalanche warning services ), precautionary measures (e.g. safety distances, self-restriction on routes with the corresponding slope direction and inclination, etc.) are necessary. Bringing an avalanche search device (“avalanche peep”), an avalanche shovel and an avalanche probe (each per person) is standard on every ski tour. There is further safety equipment that makes it easier to find the buried subject ( avalanche ball , avalanche airbag ), helps avoid a complete burial (avalanche airbag) or is intended to increase the probability of survival as a buried subject (AvaLung). Nevertheless, an avalanche burial is always a fatal danger; Avoiding them through considered and defensive behavior is the top priority.

Sufficient knowledge of avalanche science, the appropriate application of decision-making strategies and the regularly practiced search for buried subjects are prerequisites for tours in unsecured alpine winter mountain sports.

A map with a topographical representation of the terrain (scale 1: 25,000 or smaller) is required for tour planning in order to be able to adequately estimate the exposure and steepness of the terrain and the risks of the planned tour. In poor visibility, GPS satellite receivers and an altimeter make it easier to find your way around the terrain.

Many prefer spring for ski tours - on the one hand because of the granular snow ( firn ), on the other hand because of the usually lower avalanche danger, which can increase due to the warming of the day (see avalanche report ). Particularly in the typical spring conditions with cold, clear nights and warm days and the prevailing firn, the conditions are often safe - when the crust cover (hard snow) is still stable, so you are out early enough. On long tours this can mean leaving before sunrise.

At the end of the ski touring season, some mountaineers take their short firn gliders (“Figl”) or microski with them in their rucksacks, which enable short descents in the last remaining snow fields.

The history of ski racing or the Wettkampfskibergsteigens goes back to originally from the military discharged competitions. So-called "military patrols" served as a test of strength and for the physical training of the participating teams. Since the 1920s, civil races have also been held. B. the "May race" in Gosau, the "Geierlauf" in the Wattentaler Lizum and the "Wildsaurennen" in Praxmar . 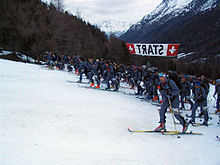 Start of the Patrouille des Glaciers 2006

Military patrol, in which ski mountaineering was combined with scoring shooting, was an Olympic discipline at the 1924 Winter Olympics . The teams in these runs each consisted of four participants who were active soldiers at the time of the Olympic Games. However, this discipline did not arouse the expected interest from the audience, so that the military patrol discipline was declared a demonstration competition by the International Olympic Committee (IOC) in 1926 . As such, the military patrol run was held three more times as part of the 1928, 1936 and 1948 Winter Olympics. The Olympic military patrols are considered to be the forerunners of the Olympic discipline of biathlon . The Union Internationale des Associations d'Alpinisme (UIAA) planned to include the sport of ski mountaineering at the 2018 Olympic Winter Games . However, the IOC announced on February 15, 2018 that ski mountaineering would not be Olympic in 2022 either. His Olympic debut is there at the Youth Olympic Winter Games in 2020 from Lausanne enter.

After the Second World War, countries in which ski races had survived in the high mountains organized competitions based on their traditions. In the 1970s, new competition races were launched in some Alpine countries; so z. B. from 1965 by Riccardo Cassin and the CAI Lecco the three-day rally Scialpinistico di Lecco. At the beginning of the 1990s, ski mountaineers from France, Italy, Spain, Andorra, Slovakia and Switzerland founded the Comité International du Ski-Alpinisme de Compétition (CISAC), in 1992 the first European Cup and also the first European Championship .

Portions of this article appear since 2009, out of date to be .
Please help to research and insert the missing information .

The competitive version of ski touring is now internationally summarized in the International Council for Ski Mountaineering Competitions (ISCM) under the umbrella of the UIAA in Switzerland. In 2008, 34 nations belonged to the association. The most important competitions in the Alps include the Patrouille des Glaciers and the Trophée du Muveran in Switzerland, the Trofeo Mezzalama in Italy and the Pierra Menta in France. In 2008 there were around 500 competitions worldwide. There have been official world championships every two years since 2002, and a World Cup since 2004. The 2002 World Cup was held in the French Alps, in Spain in 2004 , in Italy in 2006 and in Switzerland in 2008 .

During the competitions, the climbs are made with climbing skins . The ski runs mostly lead away from the slopes through open ski terrain. The route profiles also contain passages that can only be conquered on foot or with crampons . The skis are carried on the shoulder or attached to the backpack. The competitions generally offer the disciplines of individual run, team run, relay run and vertical race , sometimes also a race over the so-called "long distance".

Ski tours are also undertaken near or on the ski slopes (piste tour) . Occasionally, the interests of ski mountaineers and ski area operators collided. This problem was particularly discussed in winters with little snow (e.g. 2011/12, 2013/14 and 2015/16). There is a risk both between ski tourers ascending at the edge of the piste and the piste skiers as well as on night tours after closing time when descending with the piste maintenance staff, especially when preparing the ropes with snow groomers .

The German Alpine Association has drawn up 10 rules for ski touring on slopes. Furthermore, separate regulations have been negotiated for all Bavarian ski areas between the DAV and the cable car operators. Similar regulations also exist for Austria (recommendations of the Austrian Board of Trustees for Alpine Safety ). and Switzerland.

A model case with regard to an express ban on ski touring on a slope is a conflict in the classic ski area of ​​the Zugspitzbahn in Garmisch-Partenkirchen in Bavaria. Tourers filed a lawsuit there in 2011. Despite compromise proposals, the matter was settled. The Munich Administrative Court declared the ban on slopes to be inadmissible. The Bavarian Administrative Court decided on appeal in 2013 analog, because right of access applies, groomed ski slopes lose In Austria there are "not in spite of the strong change through structural measures, technical facilities and safeguards its character as a part of nature." - below the tree line - no fundamental Freedom of movement ; the landowners must expressly give their consent (route within the meaning of § 1319a ABGB ). Here, individual ski areas opt for prohibition, tolerance or an explicit invitation, for example for a small fee for maintaining an ascent track. The greater Innsbruck area, for example, is a model region. (Tyrolean piste tour model).