Identification of the prisoners in the concentration camps 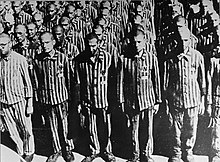 Dutch Jews, Marked with a Yellow Star and N, on the Roll Call Square in Buchenwald Concentration Camp (February 1941)

The marking was done with the help of colored fabric triangles, the tips of which pointed downwards or highlighted upwards. The badges, also called "angles", were sewn onto the striped concentration camp inmate clothing ( jackets and shirts ) so that the guards could identify the reason for their imprisonment.

Further differentiations were made according to nationalities and the tasks as prisoner functionaries (for example Kapos , room elder or block or barrack elder). In the first years of the concentration camp and in some cases later, the prisoner numbers were also put on clothing. 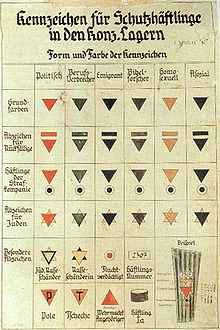 Display board: "Identifiers for prisoners in protection in the concentration camps"; Teaching material for SS guards

The embossing was chosen according to the danger signs in Germany. In addition to color coding, groups of inmates were put in letters in the triangle to indicate their country of origin. For example, a red triangle with an “F” indicated a political prisoner from France .

The most common "angles" were:

The various markings were worn by one inmate at the same time, sometimes even more than six: so the first letters of the country of origin:

Every prisoner received a registration number (prisoner number) when they were admitted to a main camp. From now on he no longer had a name in the camp, but was called with this number and had to report to each of his superiors with this number (with the cap off and in a careful attitude).

Tattooed number of an Auschwitz prisoner

Usually the prisoner numbers were attached to the clothing. Only in the Auschwitz concentration camp were prisoners also tattooed . On the one hand to avoid confusion of undressed corpses and on the other hand to identify escaped prisoners more easily. Usually the inmate number was tattooed on the left forearm. Exceptions were children who were born in the camp. Since there was not enough space on their forearms for a tattoo, they were tattooed on other places (e.g. thighs) instead.

In Auschwitz there were also other classifications. For example the "Z-Series". These numbers were used for the gypsy camp from February 26, 1943 . Russian prisoners of war got the "R-series" from October 7, 1941. There was also the "A-series" for men from May to August 1944 and then the "B-series" until November. In addition, the “A and B series” were introduced from May 1944 for so-called “transport Jews”.

The numbers of the inmates recorded in this way were recorded in an accounting system in each camp and read out during the two daily roll calls on the roll call square . Before and after moving out to work details, changes (death, transfer to the precinct, dismissals) were checked using these numbers. They were also used to bill the prisoners' work to the companies, small businesses or authorities involved.

Using the numbers in the various camp accounts, it was sometimes possible to track individual transports of prisoners between the concentration camps in the post-war period even if the prisoners were later killed or were considered missing. Especially when transporting prisoners from the occupied countries of Europe, this was often the only way to determine the place of death and the probable time of death.

Some of the series of numbers of individual concentration camps contained additions for individual groups of victims. When moving to a different main camp, new numbers were sometimes assigned.