The title of this article is ambiguous. Further meanings are listed under Max Reimann (disambiguation) . 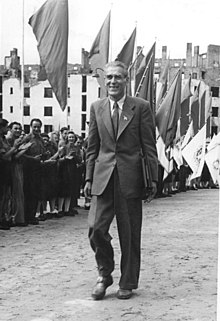 Grave of Max Reimann in the Friedrichsfelde Central Cemetery in Berlin 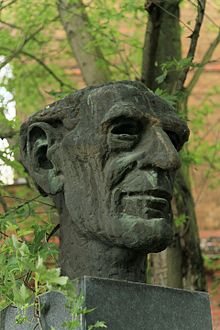 Max Reimann was born in Elbing, West Prussia, the son of a metalworker. From 1904 to 1912 he attended elementary school in Elbing, from 1912 to 1916 he worked as a riveter, in 1913 he became a member of the German Metal Workers 'Association and its youth management as well as the Socialist Workers' Youth , and in 1916 also the Spartakusbund . Sentenced to one year imprisonment in a fortress in 1918 for taking part in battles against the Freikorps von der Goltz in Elbing , he was imprisoned in Königsberg . In 1920 Reimann moved to Ahlen as a miner and joined the German Miners' Association there . He became honorary political leader of the KPD Ahlen and from 1921 a full-time KPD functionary. In 1923 he took part in the fighting in the Ruhr area resulting from the occupation of the Ruhr and was then briefly imprisoned. From 1920 to 1928 he did trade union work in the KPD sub-district of Hamm and was a co-founder of the Communist Youth Association in the Buer-Recklinghausen sub-district, where he was also responsible for the admission of Kurt Goldstein , who came from the "bourgeoisie", to the youth association. From 1926 Reimann was a member of the leadership of the Revolutionary Trade Union Opposition (RGO) of the German Miners' Association and between 1929 and 1932 secretary of the KPD sub-district of Hamm and second secretary of the RGO in the Ruhr area.

From 1933 Reimann was politically active as political director of the RGO Ruhr and from June 1933 as senior advisor to the RGO on the Middle Rhine and in Cologne. In 1934 he was promoted to Reichsleiter of the RGO and worked for the Union's Western Europe Secretariat in Paris. In 1935 he took part in the Saarland election campaign for the Saar referendum , which was lost to opponents of National Socialism, and in the same year he took part in the 7th Congress of the Communist International in Moscow. In 1939 he worked in the KPD foreign secretariat in Prague and illegally in Germany several times. After the German invasion of Prague , until his arrest on April 4, 1939, he directed the escape of KPD cadres abroad. In May 1940 Reimann was sentenced to three years in prison for “preparing for high treason”. The imprisonment began in Hamm prison and continued from 1942 in Sachsenhausen concentration camp , where he became a member of the illegal camp administration. In 1944 she was transferred to the subcamp in Falkensee . Max Reimann was involved in the self-liberation of the camp together with other prisoners.

At the 15th KPD party congress in April 1946, Reimann delegated eleven other top officials (including Kurt Müller , Walter Fisch , Fritz Sperling and Albert Buchmann ) to the SED party executive . He - like the other eleven - had to resign on the orders of the Western occupying powers, however, as the SED was not allowed in the West. In 1948 he became chairman of the West German KPD, having previously led the party in the British zone. 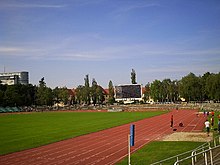 On June 13, 1950, he was barred from participating in plenary sessions for 30 days because of unparliamentary behavior by Bundestag President Erich Köhler .

Reimann vehemently rejected the occupation statute and described it as the "colonization" of West Germany. He evaded an arrest warrant in 1954 by moving to the GDR . From there he continued to lead the party, even after the KPD was banned in 1956. From 1957 as 1st secretary of the central committee of the illegal KPD.

Reimann's role in the party purges in 1950

In March 1950, Max Reimann played an important role in the internal party purges controlled from Moscow in the wake of the Noel Field affair . Among other things, the deputy KPD party chairman and member of the Bundestag from North Rhine-Westphalia, Kurt Müller, was asked to go to East Berlin through a telephone call with Max Reimann. After a conversation with Walter Ulbricht , Müller was arrested in the Central Committee building and taken to the central remand prison of the State Security in Berlin-Hohenschönhausen . Shortly thereafter, he was sentenced to 25 years in prison by a Soviet court and deported to the Soviet Union. The interrogations were carried out personally by the then Deputy Minister for State Security Erich Mielke . In addition to Müller, the party leader of the KPD in the Hessian state parliament Leo Bauer , the Hamburg KPD state chairman Willi Prinz and Müller's successor as deputy KPD party chairman Fritz Sperling were directed to East Berlin and arrested there. The arrested were tortured during interrogation by the GDR Ministry for State Security and the Soviet secret service MWD , after which they were sentenced to long prison terms in labor camps and penitentiaries in show trials. Reimann campaigned for the release of Sperling. Fritz Sperling died just two years after his release from prison, at the age of 46, of the consequences of the abuse he had suffered.

Transfer of the KPD to the DKP

From East Berlin, Reimann advocated the re-admission of the KPD in the Federal Republic. When the SED decided in 1968 to set up a legal communist party in the Federal Republic of Germany with KPD functionaries like Kurt Bachmann , Herbert Mies and others, Reimann initially continued to advocate lifting the KPD ban. Only when, after Brandt's meeting with Brezhnev in the Crimea, it became clear that the DKP was not threatened with a ban, did Reimann find himself ready to join the new party in September 1971.

In 1968 he returned to the Federal Republic of Germany . From 1971 he was honorary chairman of the DKP. He was buried in the Stoffeler cemetery in Düsseldorf . After the death of his wife Ilse Reimann, the family arranged for his urn to be transferred to the central cemetery in Berlin-Friedrichsfelde ( burial site for the victims and persecuted of the Nazi regime ).

Several streets in the GDR have been named after him, some of which are still called that today.