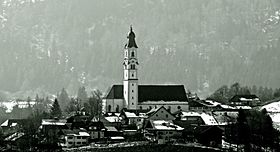 Pfronten is a municipality in the Bavarian-Swabian district of Ostallgäu and is located in the southwest of Bavaria directly on the border with Tyrol ( Austria ).

View from the Breitenberg to Pfronten

Pfronten is one of a total of 45 cities, markets and communities in the Ostallgäu district .

Pfronten is located on the northern edge of the Allgäu Alps in the Pfrontener Valley . The municipality is traversed by the Vils . It is at an altitude of 853  m above sea level. NN at the foot of Edelsberg , Kienberg , Breitenberg and Falkenstein . The highest point of the municipality is in the far south of the summit of the Aggenstein ( 1986  m above sea  level ) on the Tyrolean border, which belongs to the Tannheimer mountains . The lowest point in the municipality is on the Vils on the border with Austria at approx. 830 m above sea ​​level .

Neighboring communities of Pfrontens on the German side are the city of Füssen , the community of Eisenberg and the market of Nesselwang . In Austria, the country town of Vils and the Tannheimer Tal with the communities of Grän , Tannheim , Schattwald , Zöblen and Jungholz are neighboring .

The community has 13 districts.

Pfronten is also known as the 13-village community. All of these places have certainly formed a single parish since the late Middle Ages .

The case mill belongs (Achtalstraße 62) for the district village of Falkenstein (hotel and castle ruins ) to the district Meilingen.

A Roman supply road led through Pfronten from the south to Cambodunum (today's Kempten). A Roman settlement of the valley is not guaranteed.

However, the name Pfronten cannot be explained from the German language . The best interpretation suggested so far is based on a Romance name frontone , which means "large, mighty forehead" or "front" and should probably designate the "forehead of the Alps". It could also be understood as the equivalent of today's name Breitenberg .

The Christian provincial Romans who remained in the Ostallgäu ( Tegelberg Roman settlement ) gradually settled in pagan Alemanni . Around the year 800 the “Roman” language had died out in the area. In the now Frankish-Carolingian area, the population had merged into a unit with German language and Christian faith.

From the early 14th century, all of Pfronten belonged to the bishopric of Augsburg , the secular territory of the Augsburg bishops. With the secularization of the bishopric, Pfronten also fell to the Electorate of Bavaria in 1803 . In 1818 the parish was formed.

In 1865 the former parish of Pfronten was divided into Pfronten-Berg (Bergpfronten) and Pfronten-Steinach (Steinachpfronten). Each of the two new communities had its own administration and accounting. On March 31, 1935, both parishes were reunited to form the parish of Pfronten.

The mayor Alfons Haf is also a member of the municipal council. He has been in office since March 2020.

The municipality was granted permission to fly a flag by resolution of the Bavarian State Ministry of the Interior on February 14, 1955. The coat of arms in the upper part symbolizes the Falkenstein as a landmark of the Pfrontener valley. The two stripes in the color sequence white-red stand for the former affiliation of the community to the bishopric of Augsburg .

A partnership with the French municipality of Thoiry has existed since 2002 .

Pfronten-Ried and Pfronten-Berg with the parish church of St. Nikolaus. View from the east

The Heimathaus Pfronten houses a local history exhibition. The focus of the collection is on tools and household items in the 19th and 20th centuries. Century. In the house of the guest in the former Karzer works by Pfronten artists are exhibited and the hay museum shows equipment for the extraction of mountain hay. Over 450 species of plants can be viewed in the alpine garden

Pfronten has an ice rink with an area of ​​1,800 m². There are also numerous ski lifts, for example in Röfleuten and Steinach and on the Breitenberg. In 2011, a mountain bike marathon with three route lengths was held for the 8th time (all three routes lead up to the Breitenberg) and for the 3rd time the folding (mountain) cycling world championship. Also traditional is the paragliding competition for the Breitenberg Cup, which took place for decades between the local Stratos association and members of the hang-glider and paraglider pilots from Marktoberdorf and has been organized by the Ostallgäu paragliders since 2018 under the new name Ostallgäu-Cup .

There are numerous sports clubs with the associated sports facilities. The ice hockey club EV Pfronten also plays here . There are also two traditional costume clubs in Pfronten. The Heimatverein Pfronten is committed to researching local history and maintaining nature and culture.

Pfronten is located directly on the Ausserfernbahn , a railway line that connects Kempten (Allgäu) with Reutte and further with Garmisch-Partenkirchen .

In the early modern era, the Pfronten economy was strongly influenced by agriculture. Livestock and flax cultivation played a major role. The trade in wood from the wooded region also brought the population an additional income. At times the logging was so great that forests had to be put under the spell and thus protected.

Another mainstay was the salt trade. The Pfronten rod people, together with their neighbors in Vils , were allowed to pick up salt barrels in Reutte and had to transport them to Oy, where the next salt deposit was. A few residents also had a share in the lucrative long-distance trade as carters. At times, all four concessions of the so-called Kempten relay were awarded to Pfrontener. They served the route from Venice via the upper road to Ulm. According to an old report, they had 30 to 40 horses. A carter with three horses loaded 50 to 60 quintals.

At the end of the 18th century, eleven gypsum mills were gradually built along the rivers, in which calcined limestone was crushed using water power. The gypsum, which at that time was mainly used as building material and fertilizer, was transported in barrels to Kempten and Augsburg.

With Carl Hirnbein , who learned how to make Emmentaler in Switzerland, the landscape of the Allgäu changed in the 19th century. With the introduction of dairy farming, the blue flowering flax was replaced by green meadows .

At the same time, with the Pfronten watchmaker Thomas Haff (1775-1859), industrialization finally found its way here. During the Napoleonic era, Haff adjusted and repaired surveying instruments for the Bavarian geometers and got to know the production of mathematical instruments. His sons then founded the HAFF brothers company in 1835. Many precision mechanics were trained here, who themselves founded companies here and thus made Pfronten a center of the precision engineering industry and mechanical engineering.

Hermann Wetzer (1847–1914), who learned his trade at Haff, founded a company for the manufacture of telegraphs in Pfronten-Steinach in 1872 . The telegraph factory first supplied the Bavarian Post and from 1878 the Prussian State Railways and numerous foreign railway companies. In 1941 the company structure was changed from the sole proprietorship “Hermann Wetzer Telegraphenfabrik” to the limited partnership “Hermann Wetzer KG”. Due to the economic crisis, Wetzer was taken over by the Endress + Hauser Group in 1973 .

Towards the end of the century, more and more spa guests came to Pfronten in summer. At first they stayed in rather modest quarters. When the "Beautification Association" founded in 1883 began its work, the number of overnight stays rose. Even before 1905, a “very beautiful bathing establishment” was built in the “Upper Weidach”, the pure mountain water (slightly tempered by a preheater) is extremely refreshing. (Men's and women's pool, single cabins). Numerous, pretty benches in the shady area. " 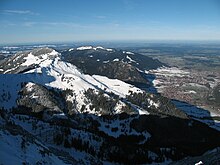 View of the Breitenberg and Pfronten ski areas

Pfronten has the title “climatic health resort” and is licensed as a “European hiking village”. Three tours of the Allgäu hiking trilogy have Pfronten as a stage.

There is also a parking space for mobile homes in Pfronten-Weißbach and a campsite in Pfronten-Steinach.

The Breitenbergbahn takes visitors to the Breitenberg and thus to the Pfrontener Hochalpe. This is used by visitors as a hiking area in summer and as a ski area in winter.

The transmitter Pfronten is located on the eastern slope of the Breitenberg .

In terms of educational institutions, Pfronten has a primary school and a middle school with an M-train in the Heitlern district. A very well-stocked community library is available in the Heimathaus in the Berg district.

Pfronten was one of the locations of the resulting film 1963 Escape ( The Great Escape ) with Steve McQueen in the main role. The final part of the film, the escape through Europe, was filmed in Pfronten as well as in Füssen, Schwangau and Hopfen am See, each with the participation of the local population.

The film Hurray, the Swedes are there was shot in 1978 in Pfronten and Füssen. Original locations such as the Bavaria Hotel, as well as the hairdresser building, or the village center still exist today.

Municipalities in the Ostallgäu district