Biberwier is a municipality with 622 inhabitants (as of January 1, 2020) in the Reutte district in Tyrol ( Austria ). The community is located in the judicial district of Reutte .

The street village is located on the southern edge of the Lermooser Moos , between a mountain slope and the landslide landscape of the Fernpass in the Tyrolean Alps. The municipality is traversed by the Loisach , which rises west of the town. The community is located near the border with Germany on the edge of the Wetterstein Mountains and can be seen from the Zugspitze .

The name is derived from beavers that have been proven to have lived in the municipality until 1800. Finds from Roman times testify to the early importance of the place on the Via Claudia Augusta . The track grooves at the northern entrance to the town are probably of a later date. From the Middle Ages until 1921, the largest mining operation in existed here at the Silberleithe, Außerfern , the union Silberleithen that calamine , - lead - and zinc ore mined. Since the end of 2004, the Silberleithen Montan hiking trail has opened up this former mining area for tourism. With the Lermoos tunnel opened in 1984 , the town was relieved of through traffic.

Biberwier is on the long-distance cycle path , which runs as the Via Claudia Augusta along an ancient Roman road of the same name .

Today, Biberwier with the Marienbergjoch ski area and the Blindsee , Mittersee and Weißensee swimming lakes is a two-season tourist community.

Blazon : Divided by gold and blue in a snake cut, on the left in the upper field, following the dividing line, a blue wheel , the hub of which is covered with the gold mining symbols mallet and iron , on the lower right a sitting beaver looking to the left . The colors of the municipality flag are yellow-blue.

The beaver in the municipal coat of arms, awarded in 1983, symbolizes the place name, mallets and iron refer to historical mining, the wheel to the important transport sector. 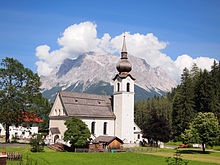 Cities and municipalities in the Reutte district