from Wikipedia, the free encyclopedia
This is the spotted version , flagged on July 5, 2020 . There is 1 pending change that has yet to be viewed.

Neusiedl am See, at 133 m above sea level, is located on the north bank of Lake Neusiedl between the foothills of the Leithagebirge and the Parndorfer Platte . The municipality is characterized by the surrounding vineyards as well as by the Kalvarienberg and the clay massif Taborberg.

650 ha of the urban area are in the Zitzmannsdorfer Wiesen national park area.

The only place is Neusiedl am See, which also includes the districts Refugium , Seemuseum and Segelhafen West .

In Neusiedl am See, a new Burgenland temperature record was set on August 8, 2013 with a maximum temperature of 40.3 degrees Celsius. 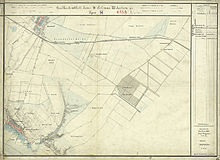 Neusiedl am See with the remains of the Kuruzzenschanze north of the Tabor, around 1873 (recording sheet of the 3rd regional photo )

The first documented mention of "Sumbotheil" (German Saturday market) comes from the year 1209. In the middle of the 13th century, the place was destroyed by the Mongols and repopulated around 1282 under the name "Niusidel". In 1517 Neusiedl was granted market rights . Neusiedl was devastated in 1683 in the course of the second Turkish siege and in 1708 by the Kuruc . In 1926 Neusiedl am See was granted town charter, which had been sought in vain in 1824.

Due to the favorable transport links to the greater Vienna area , the city has had one of the highest population growth rates in Burgenland since the 1980s . 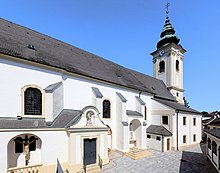 Ruin at the Tabor

Brennerscher Hof in the city center with a bell tower
See also:  List of listed objects in Neusiedl am See

→ Main article : "Kaiserstein for the new Trinity column commissioned by the Neusiedl am See city council" in the article Kaiserstein (rock)

Neusiedl lives from viticulture , tourism and numerous businesses. The main season for tourism is, due to the lido, in summer, whereby here mainly visitors from the greater Vienna area, but also numerous guests from southern Germany use the nearby opportunities for swimming , windsurfing , kite surfing and sailing . From spring to late autumn, Neusiedl am See is a popular starting point for bike tours in the Lake Neusiedl region thanks to its convenient transport links.

In the winter months, the lake, which is closed for weeks, also attracts numerous ice skating and ice sailing tourists.

Numerous commercial and trading companies are based in Neusiedl am See. A large industrial park with a technology center has been built at the motorway exit since the end of the 1990s. Immediately adjacent to Neusiedl am See is a Designer Outlet Center in Parndorf with dozens of shops for fashion brands. Since the third quarter of 2006, Neusiedl am See has had its own shopping center called “Pannonia”.

As the district capital, Neusiedl am See is the seat of a district court and the district administration . The labor market service is also located in the city. The Berger barracks had been located in Neusiedl am See since the 19th century and was used until mid-2006 as part of the armed forces' assistance on the Hungarian border. At the end of July 2006, however, the barracks were abandoned and removed down to the main part, which is a listed building, in order to make space for row houses. There is also a police post in Neusiedl . The district office of the Red Cross , which has been entrusted with the rescue service by all communities in the district, is also located in Neusiedl.

In addition to a public and a private Roman Catholic elementary school and a Roman Catholic. Secondary school is located in Neusiedl am See, a special school , a secondary sports school , a polytechnic school and the Neusiedl grammar school , a federal high and real high school . Other schools are a higher education institute for economics and tourism (Pannoneum), a business academy and business school (academy of business), which celebrated its 40th anniversary in 2015. There are three community kindergartens for the youngest roommates in the city (Kindergarten Gartenweg - formerly Roman Catholic kindergarten, Kindergarten Am Tabor, Montessori Kinderhaus).

Neusiedl am See has a newly expanded lido with a sailing center and schools for kitesurfing and windsurfing . The lido also offers beach volleyball and beach soccer courts and a basketball court .

In addition, there is an indoor swimming pool in Neusiedl am See (with a fun or skate park right next to it), a golf course, tennis courts, a soccer field with natural and artificial turf and a riding stables. Neusiedl am See is also particularly popular with cyclists as it is located directly on the cycle route around Lake Neusiedl.

As a result of the successes in sailing at the 2000 Summer Olympics in Sydney, a federal sports center was set up in Neusiedl to promote young talent in sailing.

The Caritas Burgenland offers sixty of dependent people care in the home of St. Nicholas.

Local council in the composition of 2017. In the middle the new mayor Elisabeth Böhm.

The city council comprises a total of 25 seats due to the number of inhabitants.

Elisabeth Böhm has been the mayor of the municipality since November 9, 2017 . Born in 1969, the clerk and trained banker is the first social democrat and the first woman in the history of the city to hold this office. In the runoff election on October 29, 2017, she prevailed over the ÖVP candidate, Thomas Halbritter, with 53.81% of the vote. Böhm was previously a councilor from 2002, city councilor since 2007 and deputy mayor since 2012. Since 2012 she has also chaired the local party.

Head of office is Judith Siber-Reiner.

Chronicle of market judges and mayors

The oldest form of the city coat of arms dates from 1592. It shows three towers, the middle one is higher, tapered towards the top and has a pointed roof with a roof core and a window on the lower and upper floors. The two side towers are slimmer, have no windows and also have a pointed roof with a roof core. The lake is indicated in the foreground. The colors are unknown.

Neusiedl am See has had a town partnership with Deggendorf , a town in the Lower Bavarian district of Deggendorf in Germany , since 1987 . Other twin cities are Mosonmagyaróvár ( Hungary ) and Pezinok ( Slovakia ).

Other personalities related to the city

Entente Florale Europe : The city was awarded a silver medal in the city category in 2011 .

Cities and municipalities in the Neusiedl am See district

Community structure of Neusiedl am See