Gols ( Hungarian : Gálos ) is a market and wine-growing community in Burgenland with 3910 inhabitants (as of January 1, 2020). The place name is derived either from the head of the Bissener , Gal or from Saint Gallus , who is associated with viticulture .

Gols is located in the north of Burgenland , in the Neusiedl am See district , east of Lake Neusiedl . It is located on the border of the two landscapes Parndorfer Platte and Heideboden.

The area northeast of the Neusiedlersee has been populated since the Stone Age. Finds from this epoch as well as from the Bronze Age and Hallstatt Age prove this. Even during the Roman occupation (3rd to 5th centuries), a dense settlement is assumed here.

Around the 10th century, the Bissen dynasty settled here , which was commissioned by the Magyars to secure the western border. The place Gols was first mentioned in a document in 1217. In 1582 Rudolf II granted the market rights and the coat of arms. At the beginning of the 17th century, members of the Batthyány family took in southern German Protestant settlers.

Like all of Burgenland, the place belonged to Hungary (German-West Hungary) until 1920/21 . Since 1898 had due to the Magyarization of the government in Budapest of Hungarian name Gálos be used. After the end of the First World War , after tough negotiations, German-West Hungary was awarded to Austria in the Treaties of St. Germain and Trianon in 1919. The place has belonged to the newly founded federal state of Burgenland since 1921 (see also the history of Burgenland ).

On 25 February 2012 and 19 December 2017 respectively got the wind turbine of the type DeWind D6 (power 1,250 kW ) of energy Burgenland in the tower gondola to about 91.5 m on fire. In the first case, the total loss was given as € 2.5 million. In the second similar incident, two maintenance technicians working there were seriously injured, but were able to descend in the tower. The plant built in 2003 has to be partially dismantled. One of these technicians is charged. 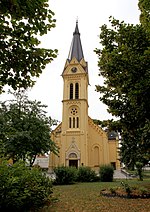 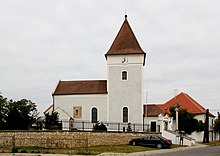 Written sources mention wind instruments from Gols as early as the 18th century. Around 1900 there was a revival of brass music, presumably by Gregor Wurm. This chapel survived until the First World War. After 1922 there were several smaller bands, which are repeatedly mentioned as the Golser band or local band.

After the political upheaval in 1938, a large band was built for the Gols local chapel; Lorenz Schrammel took over the leadership at that time. After the war, Johann Toth was the conductor of a smaller music group. The music association was founded in 1970.

The ten-day Golser Volksfest takes place every year in August. The folk festival has four pillars: the actual Gols fair (music entertainment and amusement park), Pannonia (a business fair with over 230 exhibitors), the district wine tasting and the Gols cultural summer . In 2020 the Golser Volksfest was canceled due to the COVID-19 pandemic .

Gols is one of the most important wine towns in Austria.

There are numerous taverns , wine taverns and wine outlets in the village . One of the attractions of Gols are the old wine cellars . Around half of the community area is covered with vineyards, which provide employment for around 20% of the residents.

Gols by the leads of Frauenkirchen coming and to the integration in the Pilgrim Austria in haslau-maria ellend predominantly in Burgenland extending Pilgrim Burgenland .

The council comprises a total of 25 members on the basis of population.

Head of office is Dieter Horvath.

Winner of the market town's golden medal of honor

People related to the market town

Cities and municipalities in the Neusiedl am See district