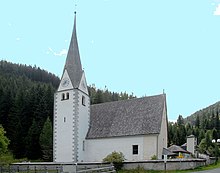 Innerkrems is a place in the municipality of Krems in Carinthia in the Spittal an der Drau district .

The place is the starting point of the Nockalm Road in the Nockberge National Park . The Schönfeld saddle offers a transition to the Bundschuh . Innerkrems is a holiday destination even in summer, but mainly a winter sports destination . The Alpine Performance Center Innerkrems was founded in 1996. ÖSV athletes , but also many foreign teams, train here in winter.

45 km of slopes , a 4- seater chair lift , a double chair lift, six drag lifts and two practice lifts are available to skiers here . In summer there is a high ropes course with five different courses up to 27 meters high and two zip lines.

Brown iron ore has been dug in Innerkrems since the 14th century . It was not until the second half of the 19th century that ore mining was given up and the blast furnaces shut down.

The miners' church, first mentioned in 1482 and named after the apostle St. Andreas , is a late Gothic building with three altars and an epitaph from 1587.