The municipality of Thomatal lies in the valley furrow between the Schwarzenberg and the Lungauer Nockberge in the Salzburg Lungau Biosphere Park and the Carinthian Nockberge . The Schönfeldsattel forms a transition into the Krems (Carinthia).

The municipal area is divided into two cadastral communities or towns of the same name (area 2016, population as of January 1, 2020):

The valley was first mentioned in writing in a purchase contract from Archbishop Wichard von Pohlheim . Finds of temple remains indicate a worship of the Roman sun god Mithras .

Thomatal has a long mining tradition. A careful observer discovers evidence of days gone by, such as B. the blast furnace with its museum.

In the blue shield on a green mountain of three a silver, round melting furnace , from which three flames blaze above .

The community council has a total of 9 members. 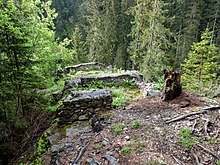 The place is ideal as a starting point for hikes in the mountainous landscape or for a relaxing holiday. In the Schönfeld winter sports area ( 1740  m ) you can go touring or cross-country skiing on the high-altitude trail.

Cities and municipalities in the Tamsweg district