Wilhelmsburg is a Lower Austrian town in the Mostviertel in the St. Pölten-Land district in Austria with 6,492 inhabitants (as of January 1, 2020).

The Traisen flows through the municipality .

Wilhelmsburg borders the district and state capital St. Pölten in the north . To the east is the municipality of Pyhra , which is separated by the watershed between Traisen and Perschling . The neighboring community in the southeast is Sankt Veit an der Gölsen , while Wilhelmsburg borders Eschenau in the southwest . Both communities do not belong to the Sankt Pölten-Land district , but to the adjacent Lilienfeld district . In the west, the city borders on Hofstetten-Grünau and in the northwest on Weinburg .

Settlement before 850 , when a Frankish nobleman named Wilhelm founded a castle here during the time of the Baierischen Ostland , cannot be proven by finds, but is likely. The first church was built in the 10th century, and the city was first mentioned in 1083 under the name Willehalmspurch . In 1180 Dietricus I. de K´Chrebezbach built the Kreisbach Castle .

The Babenberg Duke Leopold VI. In 1209 he gave Lilienfeld Abbey all its goods, rights and freedoms in and around Wilhelmsburg, and the parish is also mentioned for the first time this year. Wilhelmsburg has had market rights since 1279.

The last remains of the curtain wall. In the foreground the tracks of the abandoned industrial railway that connected the Wilhelmsburg station with the crockery factory and the Schmid & Sons foundry

The Marienkapelle in Kirchengasse was inaugurated in 1320, and in 1330 the construction of the curtain wall around the church and place began.

A major fire destroyed the town center in 1457, after which the construction of the parish church began. During the 1st Turkish siege in 1529, the market was protected by the curtain wall, which was raised from 1568 to 1587.

In 1580 the abbot Georg Premberger founded a poor citizens' hospital in today's Untere Hauptstrasse 20. Towards the end of the Peasant Wars in 1597, the peasant army north of Wilhelmsburg was crushed by the imperial armed forces. Because of this, the curtain wall was reinforced again from 1607 to 1627.

Industrialization began in 1830 with the opening of a cotton mill in Göblasbruck.

The demolition of the fortifications began between 1835 and 1837 and the first post office was built the following year . The railway station opened in 1877, and the Leobersdorf - St. Pölten railway was used continuously.

On March 13, 1900, the new cemetery was inaugurated at its current location, and in 1901 the planning of the siding between the train station and the crockery factory took place.

In the years after 1899 the Traisen was regulated and the second Viennese spring water pipeline was built, which created numerous jobs. The expansion of industry in the area also led to an increased demand for workers.

On March 29, 1920, 34 houses and 10 outbuildings were cremated in a major fire, and the old town hall also fell victim to the flames.

In 1926 a railway stop was opened in Göblasbruck, and in 1927 the first bus connection with St. Pölten had its maiden voyage .

Wilhelmsburg, Göblasbruck and Kreisbach united in 1938 to form a large community.

The Arbeiter-Samariterbund (ASBÖ) was founded in 1950 and in 1956 the construction of a bypass road began, with the route being opened to traffic gradually until 1958.

The city charter was Wilhelmsburg 1959th

On December 2, 1999, the gas explosion in Conrad-Lester-Hof 4 claimed ten lives; a 15-year-old girl was rescued from the heap of rubble. A memorial was erected at the site of the accident, and the damaged neighboring building could be used again in 2001. 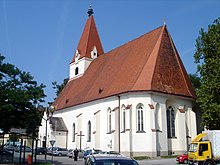 Kreisbach Castle is said to have been founded and built at the end of the 12th century . As early as 1323 Schloss Kreisbach was bought by the Lords of Hohenberg and then to the Lords of Roggendorf . In 1521, Wolfgang Jörger acquired the Kreisbach castle and estate. The Jörgers turned out to be the most ardent supporters of Lutheranism. The new doctrine quickly gained a foothold in all classes and Catholic pastors also converted. At that time Wilhelmsburg was a bastion of the Lutherans, the spiritual center for all churches in the villages in the Traisen and Gölsental.

Kreisbach Castle seen from the east

As an enthusiastic fighter for Protestantism , the last Jörger named Helmhard was declared forfeited and expelled from the country by the Catholic Emperor Ferdinand II in the course of the Counter Reformation.

The ownerless estate of Kreisbach was sold to the Lilienfeld Abbey in 1625, who had the castle chapel torn down and converted part of the Jörger's former ballroom into a new chapel. Today's Anna Chapel shows stucco work on its barrel vault from the earliest Baroque .

Today there is not much to see of the stately, four-tower castle and its defensive wall. Even when Kreisbach was a district office , investments in maintenance were not made, and building materials were even withdrawn from here if necessary.

Wilhelmsburg is located on Mariazeller Straße B20 and on the Traisentalbahn . In addition to the Wilhelmsburg train station, the Kreisbach and Göblasbruck stops are also located in the municipality.

Wilhelmsburg lies with the Voralpenweg and the Lower Austrian Mariazellerweg on two Austrian long-distance hiking trails and is also the starting and ending point of the Traisentaler Rundwanderweg .

People related to the city:

Cities and municipalities in the St. Pölten district