The title of this article is ambiguous. Further meanings are listed under Hafnerbach (disambiguation) .

Hafnerbach is a market town with 1663 inhabitants (as of January 1, 2020) in the district of Sankt Pölten-Land in the Austrian state of Lower Austria .

The municipality includes the following 21 localities (population in brackets as of January 1, 2020):

In ancient times, the area was part of the Noricum province . A Roman tombstone was found.

The rule of the Montecuccoli was of particular importance for the place . Prince Raimondo Montecuccoli became known through the battle of Mogersdorf in 1664. The local church of Hafnerbach is consecrated to St. Zeno .

In municipal there are a total of 19 seats on the 2020 local elections in Lower Austria following mandate distribution: OVP 14, SPO 4, FPO. 1 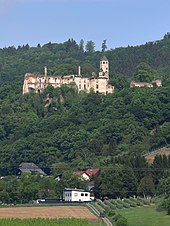 In December 2008 the "Hafnerbach Energy Group" was founded. The energy group had set itself the goal of achieving networked energy self- sufficiency in the Hafnerbach community . In this model there were still material and energy flows in and out of the community, but the sum of the sustainably generated energy should exceed the total consumption. In spring 2009 a wind farm in the area around the Dunkelstein was discussed. The personal committee "Committee for the Protection of the Dark Stone Forest", which is a member of the Federal Association for the Protection of the Forest, from the neighboring municipality of Neidling has spoken out against the planned wind power plants for ecological, regional image and landscape considerations several times. Regardless of this, in a binding vote for the local council on June 7th, 2009, 56% of Hafnerbachers voted for the construction of the wind farms. In October 2009, the operating company ImWind Operations announced its withdrawal from the project for economic reasons.

Hafnerbach can be reached by the Postbus and in Prinzersdorf , a few kilometers to the south, both Wiener Straße B 1 and the Westbahn can be reached, which offer high-level connections to the state capital St. Pölten , which is around 10 km away .

Cities and municipalities in the St. Pölten district